By Gareth Thomas April 13, 2020
Part of a series of Scottish football history articles written for us by radio presenter Alex Horsburgh, today we look at world events that are set to see history repeating at Central Park.

As the Scottish League look set to call a halt to their 2019/20 season early and award titles, and perhaps promotion for champions only, (that will depend on whether or not 75 percent of their 42 member clubs agree), one Scottish League club can certainly relate (readers should also know there is a plan to relegate one club only to the division immediately below in all divisions from Premiership down to League 2 when this season ends).

Cowdenbeath won the 1938/9 Scottish Division Two title by the proverbial country mile in Scotland's two division top flight set up shortly before the start of WW2. Six matches into season 1939/40, all football of a competitive nature in its usual form was stopped as Adolf Hitler invaded Poland with his Nazi army in September 1939 triggering the start of World War Two.


It has since become folklore in the Kingdom of Fife that when hostilities ceased in 1945 and peace returned, Cowdenbeath's promotion was declared null and void by the Scottish League. Division Two runners up for 1938/9, Alloa Athletic, also experienced demotion back to the basement of football North of the border.

25 years went by before Cowdenbeath FC finally shook off the yoke that was their sense of injustice as they were promoted for the first time since 1939, as runners up to Falkirk, in the Scottish Second Division in May 1970.

A single season (1970/71) facing the likes of the Old Firm, Hibs and Hearts plus Aberdeen and local rivals Dunfermline Athletic, in the then 18 team top flight First Division (Premier League established in 1975), would be the last great run of a Cowdenbeath team in the top flight of Scottish football to this day. The east of Scotland team, formed in the 1880s, ended season '70/71 bottom of the table with 17 points and with a semi final appearance in the League Cup to remember (beaten 2-0 by eventual winners Rangers at Hampden).

It would be another 20 odd years (1971-1992) before Cowdenbeath would experience any sort of promotion again, as once more failure to establish themselves in the top flight would leave 'Cowden' in a long standing limbo.

Former Hibernian defender John Brownlie managed Cowden from the Second to the First Division in a three division set up (Premier League/1st/2nd Division) in the early 1990's but yet again, almost unbelievably, time away from the bottom feeders was brief as the Fifers once again only had one season out of the Second Division before relegation in May 1993. 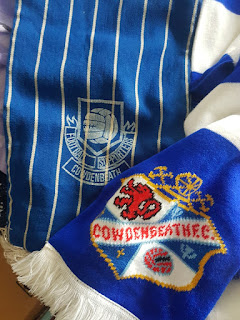 Gary Bollan is the current Cowdenbeath manager and he has done much this season to turn the club from a struggling Scottish League 2 also ran to promotion play off candidates in the top four of that division, but his hard work is likely to count for nothing as the Scottish League's clubs are set to vote to deny any team other than champions promotion when the vote is taken on the outcome of season 2019/20 (which is unlikely to be played to a finish).

Cowdenbeath FC fans might rightly wonder if sometimes the world is conspiring against them and no wonder. World events certainly have certainly starved them of glory in the years between the Third Reich and the virus which might define the third decade of the 21st Century.

"Keep calm and carry on" might even be a suggestion for Cowdenbeath Football Club's new motto once the pandemic passes!

*The vote to decide what happens with 2019/20 Promotion/relegation/titles in Scotland's four leading divisions is likely to happen before the 20th April.