Showing posts from March, 2013
Show All

The Prolific Reus and Gotze This season’s Champions League has thrown up numerous surprises.  The most obvious being the absence of any English team from the quarter-final draw, for the first time since the 1995-1996 season. Aside from this, the presence of Borussia Dortmund in the last 8, didn’t shock too many, but their road to the quarters couldn’t have been more difficult. What’s more astounding about the rapid rise of Dortmund is that only 5 years ago, the possibility of the German club competing for major European honours seemed a fairytale.  The City of Dortmund's Nazi past Borussia Dortmund is another football club steeped in History. It may not be as decorated as its German counterparts Bayern Munich but it is interesting to look at nonetheless. Like with other German clubs, the club’s past is best to begin viewing after World War II. Prior to the Second World War, Dortmund had been a moderately small club founded in 1909 by 17 youths unhappy with the “trin
Post a Comment
Read more

Balotelli - Lifelong AC Milan fan  On 31st January 2013 Mario Balotelli completed his €20m move to his childhood club Milan. Adriano Galliani, Milan Vice-President, said "Balotelli in Rossoneri is a dream that has been realised. It is a transfer that everyone wanted: club, president and fans." The hype surrounding the deal caused such a scuffle at the Ristarante Giannino police were called to regain control of the situation. Milan’s Ultras were delighted, especially after Club President Silvio Berlusconi had called Mario a “bad apple” days earlier. Whether the transfer was as a result of Pato’s move back to Brazil and Robinho’s further failure to fully establish himself or whether it was as rumored, an attempt to gain votes it didn’t matter, Balo was home!  For the British press the dream was over, the man who caused so much controversy yet so much entertainment was no longer as accessible. Stories of him going to John Lewis for an ironing board but returning with a
Post a Comment
Read more 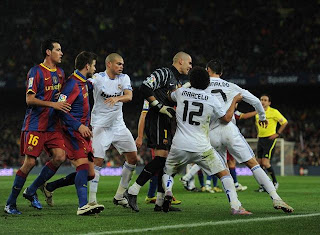 Common scene in the modern-day Clasico. Handbags. Since 1902, Barcelona and Real Madrid have locked horns in a footballing battle played with far more at stake than just team glory. On Saturday it will be no different as Barcelona and Madrid players will contest the 223rd meeting between the clubs from Castile and Catalonia. Recently the derby has prompted heated debate over who holds the greatest players, who is the most successful and has been frequently disrupted by melees, fracas and handbags from both sets of players. But why the intense rivalry from two clubs 300 miles apart? And how did it earn the name "El Clasico?"  The Barcelona , Madrid rivalry is not purely a modern day phenomenon, the divisions between their respective areas within Spain, Castile and Catalonia, have been culturally at odds for over 500 years. The Spanish Inquisition  established in 1481 joined the Kingdoms of Castile and Aragon together for the first time in a collective force to bring ab
3 comments
Read more 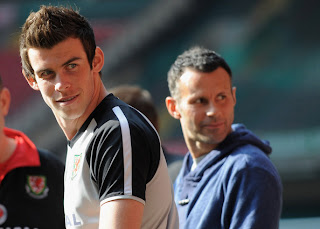 Bale and Giggs similar but who will be better?  How ironic it is that as one great Welshman was starting his steady decline with the sport another was slowly rising from the shadows? The similarities are spooky, both were born in Cardiff, both wear the number 11, both play on the left wing and both at one time or another have been considered the best in Britain.  Both Bale , 23 and Giggs 39, scored on the weekend, both are at completely different stages of their careers  Giggs will potentially play his 1000th game of football this weekend, While Bale will be looking to put Arsenal to the sword, in a crucial North London derby . If you look back at the last 10 spurs goals Bale has scored 7 of them. The cries are raining down from opposition fans of "One man team!" with some "crazy fools" (excuse me Mr.T) like me even claiming he's as good as Ronaldo . But who's the best? Wales needs an answer! obviously its a non contest now with Giggs' age gett
Post a Comment
Read more
More posts