Showing posts from December, 2018
Show All

The Sporting Revolution: How Important is it to British History? 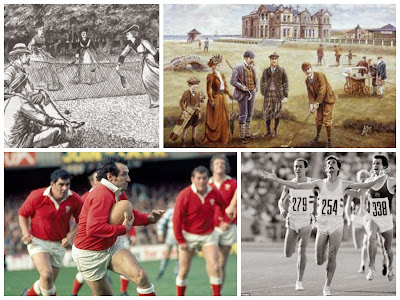 Back when Gareth and I were studying history at Swansea University - one module in particular captured our interest like no other - 'Sport in Society, 1860-1960'. Going in to our first lecture, we naively assumed we knew a great deal of sports history and more specifically, football history. The actual fact was, we didn't and still don't. The history of sport is one which has continually reflected the societies in which it has been played. The themes of class, identity, gender and the media flow through it from start to finish and it has in some way affected each and every one of us. This piece is going to explore the initial boom of sport in the UK - the so-called "Sporting Revolution". When did it start? Who did it affect? And why is it still relevant today? Let's find out. Sport changed Britain forever So when did it start? It is a question which throws up a wealth of ambiguity. Indeed, sport had been played and watched in Britain prior to the Vic
Post a Comment
Read more

Football and Christmas: An Annual Tradition

I love Christmas. I mean I really love Christmas. It's great. Food, songs, snow (sometimes) and of course, football. Every year, Boxing Day becomes more than just "the day after Christmas". In fact, it becomes perhaps one of a football fan's favourite days...that is until I checked this year's  Premier League  fixture list. There are only 9 fixtures this year, like last season with two sides playing the day after. It's something I never thought I'd see, as the game continues to bow down to the ever-growing might of television. This got me thinking about Boxing Day football and the game over the Christmas period in general. Why do we hold it so dear and why does it retain a certain majesty over the sporting season? We love you Santa, we do! The day after Christmas. After a full day of presents, food and goodwill - it's time to lounge on the sofa, kick back and watch the beautiful game unfold. The first question which needs to be asked is just when
Post a Comment
Read more

In the past, we have written extensively about the immediate impact of football and its legacy on England and Wales. However, an important area of the United Kingdom has not been researched as much as the others - Scotland. On a recent trip to Glasgow for the #FBCGlasgow2018 conference, we found the time to take a look around the Scottish Football Museum at Hampden Park. At the start of the tour, there were numerous reminders of Scotland's role in the promotion of the sport during its infancy. The active role it took and the popularity of the game 'north of the border' is difficult to rival in terms of fanatical support and innovative new ideas. Following football's codification in 1863, the sport grew significantly over the next two decades. From its upper-class southern roots, it began to disseminate further north and into increasingly urban environments. Football had been played for the sake of playing and its draw was in its simplicity. What set it apart from r
1 comment
Read more

Football and Professionalism: Liberation or Disease?

In the modern day, the words 'football and commercialism' are becoming increasingly synonymous with the continued flow of cash entering the game through giants SKY, BT and now Eleven Sports. It's an economic boom born out of a continued desire for financial gain. For most fans, this is still a relatively new phenomenon, started with the birth of the Premier League in 1992, and, to some extent, it is. However, what we will see is that football's battle with commercialism is one far deeper and more complex than we think. This piece will look back at perhaps football's first crisis - one born out of the 'disease of professionalism' in Victorian Britain. To find out why we have to go back, right back to the formation of the beautiful game in 1863. In a pub in London, 11 schools and clubs met to discuss and agree on a definitive set of rules in order to avoid confusion and controversy. Despite, not all coming to an agreement, what these institutions did have in
Post a Comment
Read more
More posts