Showing posts from September, 2018
Show All

A couple of weeks ago we started a blog writing about the history of football and education. Indeed, the final outcome was a tad misleading with stories only ranging from 1850 to 1930. It came to our attention that the history of the beautiful game and schools is far deeper than we first imagined. In this piece we are going to be looking at the Second World War and beyond as the game had to adapt to a changing world in every sense. Last time, we noted that the relationship between football and education was closer than we ever thought possible. They do in fact share a tremendously similar background. At first, both were open to the upper class gentry. Football of course was developed in its codified form by public schoolboys. By the 1890s, the Labour party had been created, education had been made compulsory to all and football had succumbed to the 'disease' of professionalism. The working-class voice was being heard.  So where to start? The Second World War. Children
1 comment
Read more

Winter World Cups and Waterlogged Pitches: Football and the Weather 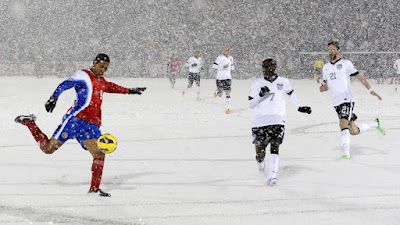 If there is one thing we love to talk about - it's the weather. It can be wild and wet one day, clear and warm the next. It's constantly changing, a bit like football. The study of football has brought with it a wealth of stories and its history with the elements throws up a load more. In this piece we are going to dissect the peculiar relationship between the two, uncovering articles you might not have heard of and see how the natural world has affected the sport we know and love. In September, we needn't worry about the weather too much. Pitches are in a good condition after the summer and temperatures are pleasant enough to play in. Fast forward to January and it will be a completely different story. The frustrations of postponements, waterlogged pitches and snow will dominate the news and media of smaller clubs all over the country. Why smaller clubs? It is no secret in the modern game that more and more of the teams playing in the top divisions of English fo
Post a Comment
Read more
More posts