By Gareth Thomas - April 15, 2020
Part of a series of Scottish football history articles written for us by radio presenter Alex Horsburgh, today we look at the 1966/67 season from a tartan perspective.


If the year 1966 was the pinnacle for English football, was 1967 the best ever for Scottish football?Did England's World Cup win actually inspire their oldest rivals to greater heights or did it embarrass the Scots so much it actually shamed them into becoming the successful nation, if only for a year, they should have been on a regular basis anyway? 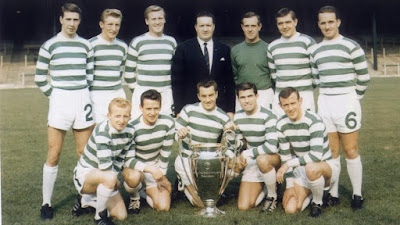 The Three Lions will always have 1966 but the Lion Rampant will always have Wembley '67 when Scotland, led by manager Bobby Brown in his first match in charge, became the first team to defeat the World Champions after their World Cup final win over the then West Germany.

The 'unofficial World Champions' claim was always an overblown one North of the border, and did nothing to erase the fact Scotland failed to get past Italy in the '66 qualifying phase, despite beating them via a last gasp John Greig goal at Hampden in 1965.

Had the Scots qualified for World Cup 1966 they would have been paired with North Korea, USSR and Chile in the North East of England in the First Round Group Stage. Would this have meant a Peru, Iran or Costa Rica scenario long before the days of Ally MacLeod and Andy Roxburgh? After all, the North Koreans (only at the tournament due to an African boycott of World Cup '66 due to no direct qualification outside a play off being available for African nations) beat Italy in the First Round group in Middlesbrough.

I doubt whether Law, Baxter, Lennox, McCalliog etc would have suffered the same fate against the rank underdogs of the mysterious communist state in World Cup '66 - but you never know. 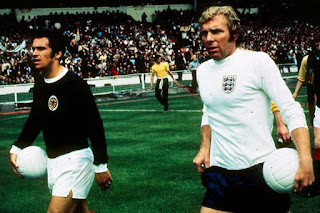 This was a decade when Scotland could steamroller Cyprus 8-0 at Hampden (a scoreline that hasn't been bettered by the Scots to this date), and stay unbeaten against England in four consecutive matches (1962-65). So I feel personally there would have been too much swagger and undoubted skill against the Koreans for the Tartan Army to experience the kind of embarrassing performance that came later in World Cups '78 and 1990.

No, Scotland would not have gone the same way as the over confident Italians v N. Korea and surely we would have qualified for a quarter final tie. (had we finished second in the First Round group it would have been Portugal at Goodision Park, home of Everton, with a win taking Scotland to a semi final v England at Wembley).

We had our moment, however, in 1967 in the Home Internationals (the match also acting as a European Championship 1968 qualifying tie) with a 2-3 victory against Bobby Moore and Co. The first half of that year also saw Celtic become the first British club to win the European Cup (beat Inter Milan 2-1 in final in Lisbon), while Rangers narrowly lost narrowly 1-0 to Bayern Munich in West Germany in the 1967 Cup Winners Cup Final. Kilmarnock almost made it a hat-trick of Scottish teams in major European club finals in '67 when the Ayrshire team went as far as the last four of the Fairs Cup (later UEFA Cup) before being knocked out by Leeds United, featuring a liberal sprinkling of Scots in the Elland Road side, on a 4-2 aggregate.

I don't think it's any coincidence that England's World Cup win inspired Scottish football to raise its game to new heights in the 1966/67 season ,but it was more to do with the sense of injustice many Scots felt in June 1966, rather than pride that their near neighbours had done so well at their own World Cup. The decisive Geoff Hurst over/behind/on the line goal will never be given the benefit of the doubt in any pub discussion about the beautiful game in Scotland and, if anything, modern phone technology has only added to the certainty amongst the Tartan Army that the Linesman who said 'goal Hurst' at World Cup Final '66 was a long distance West Ham fan!


Dennis Law went for a game of golf rather than watch the '66 final on the day, and there are at least half a dozen stories in Scottish sporting folklore of TV's being smashed or even being thrown out of windows from Glasgow to Dundee on the day of England's glory.

We should maybe now accept 1966 up here (it's only been 54 years after all) and revel in 1967 in Scotland because it is doubtful we will ever have the level of club success in Europe again that we had in season 1966/7, infact it's doubtful we'll even come close.

1967 was really as good as it got for Scottish football.

These days, just to get out the group stages in Champions League and Europa League is a big deal for the Old Firm, while the rest have struggled consistently to match the great Aberdeen and Dundee Utd teams of the 1980s, who chalked up memorable wins against some of Europe's elites in that decade.

Aberdeen won the Cup Winners Cup in 1983, beating Real Madrid in Gothenburg, while Dundee Utd were beaten UEFA Cup finalists in 1987 (lost to IFK Gothenburg in a two leg final), plus the Tannadice team just failed to join Liverpool in the 1984 European Cup final, going out in the semi finals to Roma.

Celtic were the dominant force in Scotland domestically in 1967, winning every trophy they entered in their home nation as well as the European Cup, The 2-1 final win over Inter Milan in Lisbon, with the hoops starting as rank underdogs and fielding a starting eleven all born within 30 miles of Scotland's largest city, will forever be celebrated in the east end of Glasgow.

The 1967 and 1968 Home Internationals also acted as a qualifying group for the 1968 European Championships. Despite being unbeaten v England in '67 and '68 Scotland, still failed to qualify and England reached the semi finals of the '68 tournament losing to Yugoslavia.

The Scottish Division Two title in 1966/7 was won by Morton, who scored 113 league goals on their way to the title. They won the league by eleven points from runners up Raith Rovers.

Dundee Utd and Dunfermline Athletic went out of the Fairs Cup (third European club tournament after European Cup and Cup Winners Cup) in the Second Round in 1966/67, but United knocked out Barcelona in Round 1 (beating them home and away before losing in Round 2 to Juventus 3-1 on aggregate although United won 1-0 at Tannadice).

Below: Cowdenbeath v St Mirren (stripes) in a 1967 Scottish Cup tie at a snowy Central Park. It was a significant year for the Scottish game as a whole. 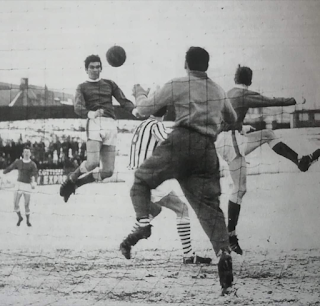