By Gareth Thomas - April 29, 2020
As part of a series of Scottish football history articles written for us by radio presenter Alex Horsburgh, today he explores the link between the incredible gesture of Hibs wearing 'Thank You NHS' next year, and a time when Hibernian broke new ground in the world of shirt sponsorship...


Hibernian FC's shirts next season will have 'Thank You NHS ' emblazoned on the front as the Edinburgh side show solidarity with NHS workers who are fighting the world pandemic which has blighted 2020. Supporters have the opportunity to pay £5 to put the thank you on the home shirts,with all proceeds being donated to Edinburgh and Lothians Health Foundation. 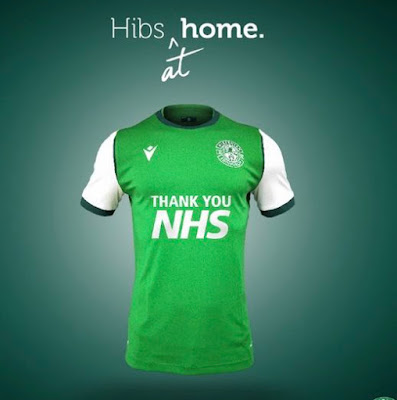 It seems appropriate in many ways that the Hi-bees should be the first major UK club to shirt sponsor in such a way with their NHS shirt, as back in season 1977/78 the Easter Road club signed a deal with Greater Manchester-based kit maker BUKTA, to wear their design on the famous green shirt with white sleeves. This green had been the first British colours in the European Cup back in the mid 1950s, when Chelsea stayed at home and refused their invitation and Hibs went into Europe as replacement for Scottish Champions Aberdeen.

However, the move to Bukta in August 1977 sparked an unexpected furore in Scottish football, in a time when shirt sponsorship was frowned upon in the UK with both non-league Kettering Town (Kettering Tyres) and Derby County (Saab cars), falling foul of the football authorities in England as they tried to bring a continental commercial fundraising approach to the British game.

It was thought the Scottish League and SFA would have a more relaxed approach to a kit manufacturer's name at the very least on the front of a shirt, but Hibs and Bukta reckoned without BBC Scotland TV and the commercial channel based in Central Scotland, STV, who firmly stated they would not show matches that saw what they termed 'free advertising' on the front of a shirt.

Initially, for games beamed into homes in Scotland, the Leith club were forced to change into a purple alternative shirt. However if the authorities thought this would curtail Bukta in their attempts to meet the challenge of Admiral and Umbro, who ruled the kit market in the UK at that time, then they were wrong, as commentators would usually explain the reason why Hibs were out of their iconic strip for the day. This at a time when their only colour clash was with the hoops of Celtic and even then there would usually be no away kit in evidence. Until the early 1980s it was actually the home team that changed when there was a colour clash north of the border anyway. 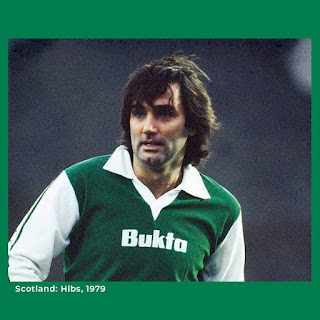 The Hi-bees finally brought in a green shirt with white sleeves minus the Bukta letters on the chest when the kit maker offered it for television, but the tv taboo of the Bukta chest writing on the shirt made it a football fashion icon which was popular until it was used for the last time at the end of the 1979/80 season. George Best played for Hibs in this season between stints in the NASL in the USA and his presence at the club only further boosted the Bukta branded Hibs kit to global popularity. Most of the iconic pictures of Best at Hibs include the superstar with Bukta on his chest, and while the kit maker also secured the signatures of Scottish League clubs Falkirk, Dunfermline Athletic, Cowdenbeath and Raith Rovers, thanks to their popularity at Hibs, it was the kit that Best wore that is now arguably their historic peak in their time as a maker of top football strips.

40 years separate the end of the first shirt sponsorship amongst major league teams in the UK with Hibernian and Bukta and the idea that will bring the NHS to the Hibs shirt when things finally get back to normal for football in Scotland... Although currently the political climate north of the border is telling us for SPFL leagues that is unlikely to be before 2021!