The 'most novel cup final in the history of football' | @GJ_Thomas

By Gareth Thomas April 14, 2020
As part of his COVID lockdown research, @GJ_Thomas has looked at the history of the FA Cup and some of its 'firsts'. Today, the first FA Cup Final with squad numbers:

CR7, R9, Cruyff wearing 14, Messi's famous number 10 - Kit numbers are a fully accepted part of modern football. Whether it is players choosing a number that means something to them, their favourite numbers, their first squad number, or clubs allocating numbers to their best players to maximise shirt sales. Despite this, there was a time in the history of the beautiful game where this was not the case. The 1933 FA Cup Final was the first in the competition's history that each team wore kit numbers, to the amusement of the watching fans and media. 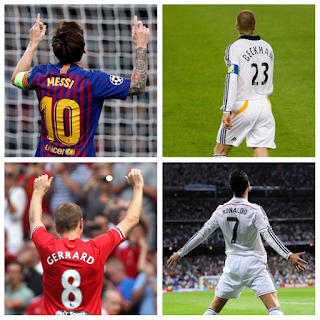 The idea of kit numbers in Britain had first been supported by the legendary manager Herbert Chapman. Chapman was an innovator who constantly sought to improve his teams. After two league titles with Huddersfield Town in the early 1920s, he joined Arsenal in 1925, planning to take the London club to great heights.

Chapman introduced the white sleeves to Arsenal kits that the clubs still use today, he believed players saw white in the peripheral vision more than any other colour. He also introduced tactical meetings before matches to analyse opponents, and was a keen media man who wanted to embrace the developing technology of the radio. His proposition of kit numbers however, was too much for the authorities and was blocked by the ‘instinctively conservative’ FA.[1] Chapman’s side had been the first to trial numbers in August 1928, playing away against Sheffield Wednesday. The Wednesday side wore 1-11, with Arsenal wearing 12-22.[2] The same day in the Division Two, Chelsea would trial squad numbers 2-11 at home to Swansea Town, with the goalkeeper remaining blank.

Following further trials, including at international level, it was decided that for the 1933 FA Cup Final shirt numbers would be exhibited again. The Derby Daily Telegraph’s build up to the game warned readers of the approach of the ‘most novel cup final in the history of football’. This was for a number of reasons, firstly 'foreign soccer enthusiasts' would be present, partly in the form of West Indian cricket team, partly due to the continuing growth of the 'Engish game' to continental Europe.


Secondly, due to the kit clash between the participants, Everton and Manchester City, it was decided neither team would wear their usual blue jerseys. Everton would play in white, with Man City donning 'scarlet' for the final. Considered even stranger than this though, was the fact each player would have a ‘huge distinguishing number on his back’.[3] Like 1928, the numbers would be separated by team, Everton 1-11, with Man City wearing 12-22.

On 29 April 1933, Everton would decimate Man City in the FA Cup Final. Winger Jimmy Stein opened the scoring in the 41st minute, the prolific Dixie Dean making it two, just after half-time. Jimmy Dunn would then wrap up the 3-0 victory in the 80th minute as Everton would lift a second FA Cup, but the significance of seeing kit numbers was not lost on journalists. Stein (11), Dean (9) and Dunn (8), would be clearly heard over the radio as commentators could easily identify players, fans too not having to guess who was on the ball.


The Northern Whig remarked that 'This Cup final will go down in history' with the much welcomed 'innovation'. This particularly appreciated by 'the spectators in the back rows of the stands or out on the terraces'.[4] The Liverpool Echo, also in favour of the development, wanted the further ‘simplicity’ of both sides wearing 1-11, beginning with the goalkeeper and finishing with the left-winger. They noted how it would be ‘much easier to spot your man and his position from a glance at your programme’.[5] Another meeting of the Football League and the FA would reject the idea once more and kit numbers were not formally implemented.

The FA Cup Final had first been broadcast on radio live in 1927, as Cardiff City beat Arsenal 1-0 at Wembley. Perhaps it was meant to be that it was media-savvy Arsenal manager Herbert Chapman who would be involved in the first live radio broadcast of final. He saw football as a ‘media event’ and agreed with BBC Director-General Lord Reith about the importance of broadcasting matches of national significance. To convince fans of the the 'Christian' values of broadcasting, the hym 'Abide With Me' would be sung, a tradition that remains in cup finals today. Radio broadcasting grew rapidly in popularity, with the number of UK radio licenses sold rising from two million in 1926, to eight million by 1939.[6]

Radio alone was not enough to get kit numbers introduced throughout the British game. It would be the growth of television that finally saw kit numbers needed. The first BBC television broadcast of football was in 1937, and the 1938 FA Cup Final between Preston North End and Huddersfield followed it. With most sets small and grainy, viewers needed as much help as possible to distinguish players.


By June 1939, the Football League would vote again on squad numbers for the 1939/40 campaign. The vote would pass by 24 to 20, kit numbers would be used for the new season (although this season was cut short by the Second World War beginning in September 1939). The move was labelled as a ‘progressive step’ by the Grimsby Daily Telegraph,[7] with the FA ‘insisting’ that these would be 1-11 for both sides, giving the media their wish, with the goalkeeper allocated the first jersey, the full-backs taking two and three, up to the left-winger at number 11.[8]


As teams grew there would be adaptions to the numbering of players. With the 1954 World Cup squads containing 22 players, all members would be allocated individual numbers for the tournament, 12-22 were irrespective of position. In 1958, a stroke of luck would see a 17-year-old Pelé wearing the number '10' jersey for Brazil. When the Brazilian FA forgot to submit numbers for the competition in time, FIFA randomly selected 1-22. Pelé would take '10' for Seleção, he would net six times on his way to lifting the Jules Rimet trophy and never gave up the '10' shirt he became so synonymous with.[9]

Over the years, a player’s shirt number became the ‘equivalent of wearing a job title’ on their back. It was like they had been ‘branded’ by a hot poker into the role the number gave them.[10] A playmaker being seen as the perfect '10', a goalscoring number '9' was what sides dreamt of, and the tricky and explosive winger wore an '11' or '7' kit.

Kit numbers are now how players are recognised throughout the world, children dreaming of wearing their hero's number for their club when they grow up. This all began at the 'most novel cup final in history' back in 1933. Although those original kit number wearers back in the 1930s, would never forsee the future crimes of the likes of centre-back William Gallas wearing ‘10’ for Arsenal, striker Milan Baroš as ‘5’ for Liverpool, or midfielder Edgar Davids turning out inexcusably as ‘1’!

This piece was written for @TFHBs by Gareth Thomas - you can follow him on Twitter: @GJ_Thomas. Make sure you purchase our debut book, 'Football's 50 Most Important Moments' here.


©The Football History Boys, 2020
(All picture borrowed kindly and not owned by TFHB)