By The Football History Boys - August 03, 2020
The trials and tribulations of golden goal are well documented in football histories, and although not favoured at the time, the concept has seen a wealth of nostalgic sentiment in recent years. Its short-lived successor, ‘silver goal’, however, has seen nothing of the sort. Only in existence for a year, the innovation by UEFA was designed to ‘encourage positive football’ and ‘produce a sensible and fairer ending to a game’. Used just once in a major international competition, the result of the experiment was a confusing, complicated and calamitous exercise of which football was quick to distance itself from.

Silver goal was effectively designed to limit extra-time to 15 minutes. If a deciding goal was scored in the first period, or if a team was ahead at the break, then the game would end at half-time in extra-time. Unlike, golden goal's sudden death approach, this would theoretically gave losing sides at least an opportunity to comeback after falling behind. Furthermore, it provided stadiums with a definitive finishing time to ease and combat safety and security concerns. If opposing teams were still level after the first period, then the rule would apply again in the second period before a penalty shootout would decide the winner if none could be found earlier.
Silver goal's introduction was born out of the inconsitencies raised by its predecessor, golden goal. Golden goal had come under intense scrutiny since its inception in the mid-1990s. Despite offering some of football's most dramatic and heartbreaking moments, critics claimed it had led to increasingly negative passages of extra-time as sides became 'too afraid to concede'. Euro '96 had seen the final decided by Oliver Bierhoff's golden goal against the Czech Republic, but earlier knockout rounds were criticised for their lack of drama. The Liverpool Echo were quick to voice their frustration at the ‘so-called and so far fruitless’ golden goal as the Czech Republic and France played out ‘quite frankly, the worst match I have ever seen’. Adding to their annoyance that Neighbours had been cancelled to accommodate the semi-final, it is clear that golden goal was not offering the impact it had envisioned upon its ratification by FIFA in 1994.
Indeed, in 2001, a meeting between 12 elite coaches decided that golden goal had meant players and officials were being ‘gripped by a fear factor’ and that the response of a team going behind in extra-time was ‘part of the excitement of the game’. By 2003, the decision had been made by FIFA to remove golden goal from the game. The positive use of the innovation at the 2002 World Cup, however, left some football fans advocating its utilisation. Nia Kunzer's dramatic header at the Women's World Cup in 2003 was the final time a golden goal would be scored as Germany sunk Sweden in Los Angeles.
In the meantime, UEFA had been devising a new system to help determine the winner of a drawn game. European football's governing body's own website was quick to write that its primary aim was to reintroduce 'positive play'.

Following what UEFA described as 'widespread consultations with a wide spectrum of representatives of the European game', silver goal was adopted. Further reasoning given was in its aim to create a more decisive period and erradicate 'negative football'. Finally, the 'sensible plan' would provide teams with a second chance in the extra period, which many believed to be essential to a good game.

"We have addressed the problems created by the golden goal which many in the game have identified. The new system will encourage positive football in the extra-time period, and produce a sensible and fairer ending to a game."

The 2003 UEFA Cup Final would offer silver goal its first opportunity to be used in a major competition. An entertaining match saw Celtic and Porto draw 2-2 after 90 minutes and provide a chance for both sides to make use of the new law. Fortunately for José Mourinho's side, they would triumph in extra-time after Derlei's strike. Unfortunately for the new rule, the goal came in the 115th minute and the full 30 minutes would be played, leaving silver goal redundant. Further frustration would be found the following week as Milan and Juventus played out a goalless Champions League Final in Manchester. 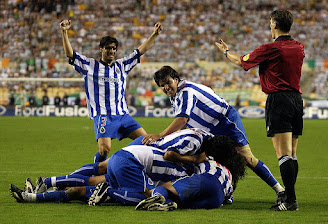 The following season would also see silver goal's use limited to only a few occasions. The 2003/04 campaign of the Champions League failed to register even a single extra-time period in the knockout rounds and could only offer one example of silver goal - during the third qualifying round. Ajax would defeat Austrian side Grazer AK via a 103rd minute penalty from Tomas Galasek. The UEFA Cup could at least offer a few more chances for the new law to flex its muscle. The straightforward knockout approach to the competition 16 years ago meant extra-time was far more likely. Eventual winners, Valencia, were the most well-known beneficiaries of a silver goal as Vicente sunk Gençlerbirliği in the last-16.
Internationally, its most significant usage came in the 2004 European Championships, hosted in Portugal. Greece’s run to the final, which they eventually won, was certainly eventful and their triumph was mainly thanks to a staunch defensive unit headed by centre-back Traianos Dellas. Withstanding attacking onslaughts from Portugal, Spain, Russia and France, the defence seemed unbreakable with another clean sheet against an impressive Czech side in the semi-final, taking the tie into extra-time.
In the 105th minute, a corner from the right was swung in dangerously towards the front post. Amidst a cluster of players, Dellas managed to flick a header goalwards and past the flat-footed Petr Čech. ‘A silver goal worth its weight in gold’ wrote Telegraph journalist Henry Winter after the game for Dellas’s silver goal had indeed proven to be as valuable as its predecessor. With just seconds left on the clock, there was no time for the Czechs to offer up a response to falling behind and the game was almost immediately brought to an end by referee Pierluigi Collina.
As if premeditating the law’s future discrepancies, FIFA chose to remove the silver goal rule earlier in 2004 at an IFAB meeting in London. Its eradication was met with little contention and the game reverted back to the tried and tested extra-time after the 2004 Euros. Despite its long standing traditions, football has never been afraid to introduce, edit and remove rules throughout its history. The most recent introduction has of course been VAR, which causes heated debate amongst football fans who want the game to return to the ‘good old days’ - whatever that means. One thing is for sure, is that it definitely does not mean a future with silver goal!
To find out more about the history of extra-time - read our blog here!

Anonymous said…
Terrific post but I was wanting to know if you could write a litte more on this subject?
I'd be very grateful if you could elaborate a little bit further.

Anonymous said…
Wonderful post! We are linking to this particularly great
article on our website. Keep up the good writing.
27 June 2021 at 22:54