By The Football History Boys August 10, 2020
A Raul Jiminez penalty against Olympiakos was enough to see Wolves progress to the quarter-finals of this season's Europa League. It is an impressive achievement for a club who just six years ago were playing in the third tier of English football. Whilst a highly anticipated clash against five time winners, Sevilla, awaits, this will not be the first time that Wolves have met some of the finest clubs the continent has to offer. In the mid 1950s, the Midlands club would undergo a series of revolutionary 'floodlit friendlies' and even be crowned as the 'champions of the world'. 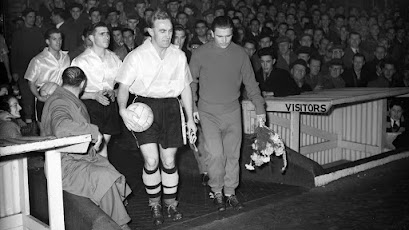 The introduction of floodlights in football surprisingly dates back to the late nineteenth century. Their use, however, was incredibly infrequent with the Football League apprehensive to utilise them and even banning them in the 1930s. It can be argued that the reasons for such a ban were primarily based on financial ramifications and even class repression. By extending the sporting day into the evening, an increase in leisure time would have to be granted and player’s pay would once more be brought into conversation.
In spite of a two-decade ban on floodlit league fixtures, 1953/54 league champions, Wolverhampton Wanderers would host a series of 'floodlit friendlies' against the best sides world football had to offer. Arranged to be played across the Autumn and Christmas period, spectators would flock to Molineux to see the best the world had to offer. The Birmingham Daily Post was quick to note the hectic arrangements under the headline 'Busy Wolverhampton'. The first opportunity for the stadium to host a floodlit fixture came with the 1954 Charity Shield Final. Hosting FA Cup winner and Midlands rivals West Brom, it wasn't just the match that supporters were interested to see. 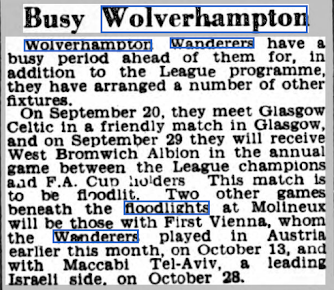 The fixture against West Brom was a tremendous success for the new technology and an equally fantastic game. Drawn 4-4, the trophy was shared for only the second time in the competition's history. Perhaps it was the notable absence of star defender and England captain Billy Wright which could be to blame for such a lack of defence solidity. Played in the 'international break', there were many other star players missing from the fixture. Around the same time, it is common to find numerous newspaper articles covering other sides and their initial forays into floodlit matches. League leaders Chelsea would accept Brentford's invitation to play under the lights at Griffin Park and Kilmarnock would host Sparta Prague just before Wolves' clash with West Brom.
October and November would see the fixtures pile up for Wolves. Under the lights at Molineux, Tel Aviv were humbled 10-0 and Spartak Moscow were ‘hammered and sickled’ 4-0. The Daily Herald ran with the headline, 'Wolves Bash the Floodlights out of Spartak'. Every aspect of the match drew intrigue from journalists, from the pre-match training methods to the reactions of backroom staff. The alien nature of foreign football was of immense curiosity, as most in attendance had little knowledge of what was in store. Wolves boss Stan Cullis would comment that he had never seen a side train as hard as Spartak but were ultimately 'out-manouvered and outstayed by a fighting band of British footballers'. Tel-Aviv and Spartak were of course impressive victories, but Wolves were yet to be truly tested. Step forward Hungarian giants Budapest Honvéd.
Honvéd were revered throughout Europe and featured a number of the Hungarian national team, the ‘Magical Magyars’. In the past year, the national side had twice battered England, including the famous 6-3 ‘Match of the Century’ at Wembley. Before the match, national newspapers had predicted a close game between the finest side in Europe and the best team in England. Upon their arrival, the Honvéd team were treated like celebrities. Key players Ferenc Puskás, Sándor Kocsis and Zoltán Czibor were by now household names and the presence of young autograph hunters signified Honvéd’s growing popularity.
Despite being from the other side of the Iron Curtain, media reports highlight a sense of awe and admiration for the Hungarians. Words of encouragement and support were even given at a banquet dinner from Wolves Chairman J.S. Baker. Baker remarked that if Honvéd were to win, then he would be the first to congratulate them. Pre-match build-up centred on the tactics of the two sides. The Sports Argus commented on the two sides' interpretations of the long-ball. Wolves, it claimed, used the long-pass 'all the time', whereas Honvéd 'wait until the set-up is right'. Looking constantly for wingers or the main man Ferenc Puskas, the 'longish' through ball to the forwards had helped the Hungarians to victory after victory. 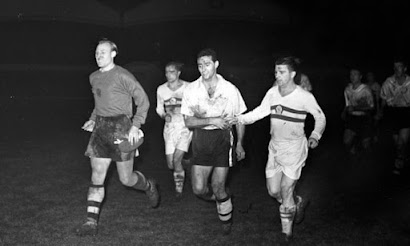 Within 14 minutes, Wolves found themselves 2-0 down. Kocsis and Ferenc Machos had scored to put Honvéd firmly in the driving seat. In spite of the ‘heavy pitch’, they had managed to control the game. Wolves manager Cullis had blamed the half-time deficit as a result of Billy Wright being drawn 'too far forward'. Similar to the match a year earlier at Wembley, the 'false 9' had confused the back four at Molineux. The Daily Herald would echo Cullis' words and write that in 'sheer football ability they [Wolves] were completely outplayed'.
The pitch would begin to disrupt Honvéd in the second half. The Yorkshire Post and Leeds Intelligencer reported that the intricate passing game of Puskás and co. was hampered by the ball being ‘stuck in the mud’. On a pitch 'as sticky as an Xmas pudding', Johnny Hancocks pulled a goal back for Wolves four minutes into the second half before Roy Swinbourne equalised with a fine header in the 76th minute. The goal had sent the Wolverhampton fans wild. Not only had they drawn level, they were pushing for a winner. Two minutes later, Swinbourne scored again with a ‘perfectly placed shot’.
Upon the final whistle, Molineux would let out a colossal roar - they had defeated the mighty Hungarians and shown incredible nous to change their tactical style in the second half. Turning the game around in the second half demonstrated a willingness to learn from their mistakes in order to improve. Billy Wright's second half performance drew mass praise, with the English captain commenting that 'it was good to get revenge for the 6-3 Wembley defeat'.
‘WOLVES. CLUB CHAMPIONS OF THE WORLD’ was the headline found in the Birmingham Gazette the next day. For the English media, winning in the quagmire of Molineux did nothing but confirm Wolves as the world’s greatest club. Winning in all weathers was ample proof that this was the best team the globe had to offer and Budapest Honvéd was merely a ‘fair-weather’ side. The embarrassment of Wembley a year earlier was beginning to be expunged and Wolves were regarded as ‘heroes, every one’.

Such British arrogance would lead to European media, and in particular, French paper L'Equipe, calling for a continental trophy to decide who really was the best.

“Before we declare that Wolverhampton are invincible, let them go to Moscow and Budapest. And there are other internationally renowned clubs: Milan and Real Madrid to name but two. A club world championship, or at least a European one – larger, more meaningful and more prestigious than the Mitropa Cup and more original than a competition for national teams – should be launched.”

Just half a year later, at the start of the 1955/56 season, the first edition of the European Cup began. Neither Wolves or Honved would feature in the first edition of the European Cup. English sides chose not to enter the new competition, still ever sceptical of the newly founded UEFA. Honved, on the other hand, would have to wait until 1956/57 to have their first opportunity at conquering Europe. Crashing out in the first round to Athletic Bilbao, the club would eventually lose the core of its team following the Hungarian Uprising in 1956.
The success of the friendlies and the promotion of the English game to the wider continent had proven floodlights to be worth their weight in gold. By 1956, the Football League had ratified their use, eventually leading to some of the game’s finest future moments. This season's (2019/20) European competitions will be written into the annals of football history, due to their unique format following the Coronavirus pandemic. Under the lights at Molineux, Wolves have managed to overcome some of the continent's finest sides in order to reach the quarter-finals. Against five-time winners Sevilla, it is sure to be another incredible match which could shape another chapter in the Midlands club's remarkable history. 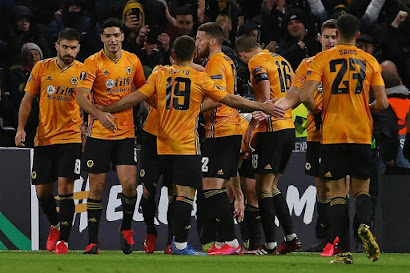