By The Football History Boys - January 10, 2014
In February 2013 up in the attic bedroom of our student house, Gareth Thomas, Ben Jones and Ollie Jackson after another prolonged football debate decided it was time we did something about the question, 'Who is the best player in the World?'. Housemate Liam suggested setting out to find the greatest 50 players of all time, this swiftly grew to 100, 150 and 200 before we settled on 250. Our original website www.top250.webs.com is still there to answer the debate but we furthered our work to blogging about the beautiful game starting up www.thefootballhistoryboys.blogspot.com.

“He takes command of things, and he knows how to motivate players who aren’t in his caliber. He demands perfection, but he does it in a way that’s not negative. He’s always upbeat, and he’s always encouraging.”

"We had a partnership going while he was learning the game and he got the Crazy Horse tag from the crowd because he ran everywhere, which at times wasn't good for an older player like me!...He had great leadership qualities and to win the European Cup in successive years was an amazing achievement."
Former Liverpool Striker Ian St. John

For more on Liverpool from the 1970s read our blog - "The Greatest Team Ever? Bob Paisley's Liverpool"

"This supreme striker was also one of the first players to write memoirs about his football career, and a statue of him stands to this day outside the headquarters of the Philippine Football Federation. A century may have passed since his glorious debut, but Alcantara - one of the beautiful game’s early greats – remains well worth remembering."
FIFA.com

For more on Paulino and his Barcelona side - Read our blog The Crest Dissected: FC Barcelona

"Perhaps England's most unsung legend in the modern day, Mortensen is arguably one of the nation's greatest players scoring 23 goals in 25 international matches. His hat-trick at Wembley in 1953 is to this day the only 3 goal tally in an FA Cup final. The Mortensen story is incredible as just 10 years previous he had been a wireless operator in the RAF!"
Ben Jones - The Football History Boys 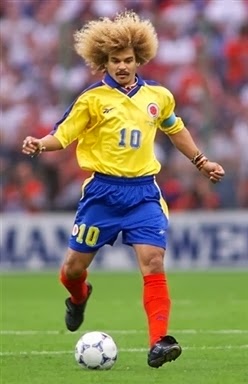 "I remember Valderrama playing against [Paraguayan goalkeeper Jose Luis Felix] Chilavert and [Argentine defender Diego] Simeone, as if he was a lion about to devour them. He was defending the Colombian colours. That is why he achieved what he achieved, and that is why he is the undisputed captain, the leader"

“I was already in position out on the left wing, ready for kick-off, and I saw Didi walking slowly with the ball in his arms. I ran over to him, shouting in desperation, 'Come on Didi, we're losing!' He just said 'Calm down lad. We're still a better team than they are. Don't worry, we´ll turn this game around soon enough...And once we heard that, everybody suddenly calmed down. We equalised five minutes later and the rest is history. That's what Didi was like: he made everything seem easy."
Mario Zagallo "A quiet individual whose unique sportsmanship set him apart from his rivals for this spot in the line-up, his red-cardless career emphasises Scirea’s placidity and sportsmanship in an footballing era that was often famous for little of either."
Forza Italian Football's Sam Lewis - As part of his Serie A: All-Time XI blog!

How do you win over Arsenal's fans? Simple - score the goal which beats Manchester United and clinches the Double at Old Trafford. That's exactly what Sylvain Wiltord did in May 2002 as Arsène Wenger's side swept all before them on the domestic stage for the second time in four years. Wiltord never achieved 'legendary' status at Highbury but he will always have a place in the Arsenal supporters' hearts after converting the rebound when Freddie Ljungberg's shot was parried by Fabien Barthez on that glorious night."
Arsenal.com (Voted #33 in their countdown of the 50 greatest Arsenal players)

"It was one of the hardest games I ever played. I think it's the only time I've been happy to see my number come up to be substituted. He was running inside and outside me, and he was too strong. My body couldn't cope with the demands of that game."
Steven Gerrard

"As far as I can remember, we used to play with anything, with any round thing we could find, and whenever we managed to get hold of a ball, that was a bonus! I mean it was amazing!"
Okocha on growing up in poverty-stricken Nigeria