By Gareth Thomas January 30, 2014
In February 2013 up in the attic bedroom of our student house, Gareth Thomas, Ben Jones and Ollie Jackson after another prolonged football debate decided it was time we did something about the question, 'Who is the best player in the World?'. Housemate Liam suggested setting out to find the greatest 50 players of all time, this swiftly grew to 100, 150 and 200 before we settled on 250. Our original website www.top250.webs.com is still there to answer the debate but we furthered our work to blogging about the beautiful game starting up www.thefootballhistoryboys.blogspot.com.

"Legend is a term often overused when it comes to sport, especially football. But when you think of someone like Fernando Carlos Redondo, the term is a mere understatement.  Seldom can players in football claim to have the perfect combination of the brawn and the brain, but this boy was special." www.thehardtackle.com

"During Simeone’s playing days he was known to be a bustling, fiery and spirited player, who not only commanded the midfield, but was also an expert passer of the ball.  He had an unyielding passion for the game, and he pushed himself to the extremes in pursuit of glory.  He never feared anyone – player nor team – only himself." www.insidespanishfootball.com

"Far from being a slight winger, he was powerfully built with supreme balance, who used his upper-body strength to his advantage to shrug off incoming challenges. Furthermore, despite his relatively young age, those around him quickly came to admire his supreme self-confidence, which verged at times on arrogance.
His stellar performances and potential drew a number of suitors, but it was the La Liga outfit, Real Betis, who eventually beat their rivals to the wonderkid’s signature – albeit breaking the world transfer record in the process by spending an estimated £21,500,000." www.worldsoccer.com

"His determination to succeed made him popular with players and fans alike and his adoption of Spanish culture adhered him to the media in a way which few British footballers had achieved previously... Becoming a cult figure with the Madrid ultras, McManaman became the first English captain of Real Madrid in their centenary celebrations... His successes at Madrid rank him as one of the most successful British players to play abroad." www.expertsforexpats.com

"Fourteen years as captain, 669 appearances and 10 major trophies, including League titles in three different decades. It's no surprise that 'Mr. Arsenal' himself is regarded as one of the Gunners' greatest ever players. Adams was the ultimate one-club man - an increasing rarity in modern football - and a rock at the heart of Arsenal's defence." Arsenal FC

"Another player who featured more prominently at international level than club level, Dunga won 91 caps for Brazil, captaining them to World Cup glory in 1994 and another final four years later.
Despite facing critics for his "Un-Brazilian" style early on in his career, Dunga's continued effort, determination, and desire won over his sceptics as he became a vital member of a team containing Romario, Ronaldo, Cafu, and Roberto Carlos, among others." Barney Corkhill, Bleacher Report

"Such is the talent in Spain’s midfield that even some of the world’s most gifted players would like look an imposter next to the likes of Xavi and Andres Iniesta. But Gerard Pique is an exception to the rule. And he’s a defender.  Barcelona’s stylish defender looks every bit an agent of tiki-taka when he glides out of defence with the ball at his feet and joins the La Roja attack. However, his technical ability should not detract away from his defensive strengths. Physically imposing, intelligent and deceptively quick, Pique is an accomplished sentry." FourFourTwo

“Dixie was the greatest centre forward there will ever be, his record of goalscoring is the most amazing thing under the sun. He belongs in the company of the supremely great ... like Beethoven, Shakespeare and Rembrandt.” Bill Shankly

"So assured was he in fact, that he liked to tell people: “The area is my domain, and I decide who enters it.” At that juncture in Elias Figueroa's career, few would have disagreed with the assertion. His anticipation and reading of the game was already beyond reproach, while his leadership skills, ability in the air and composure on the ball were recognised the world over. To give one example, at Germany 1974, he was hailed as the competition’s best defender and named alongside Franz Beckenbauer at centre-back in the tournament's Best XI." www.FIFA.com 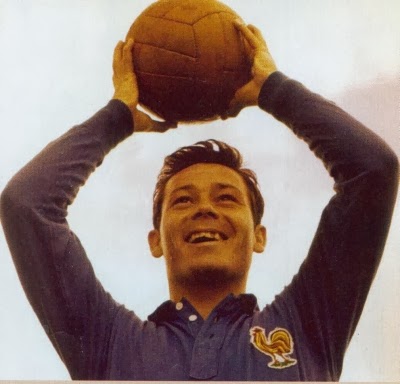 "Just Fontaine sits at 4th in FIFA's all time World Cup goalscorer list with 13 goals. However unlike Ronaldo, Muller and Klose who did it in more than 1 tournament, Fontaine can boast all his goals in a single tournament. Incredible scenes." Gareth - TFHB

"The man is simply a statistician’s dream – even more so when you consider his France totals read 30 goals in 21 games. Simply an astounding goal scorer, one whose career was sadly cut short by injury in 1960." www.FIFA.com