By Gareth Thomas - January 15, 2014
In February 2013 up in the attic bedroom of our student house, Gareth Thomas, Ben Jones and Ollie Jackson after another prolonged football debate decided it was time we did something about the question, 'Who is the best player in the World?'. Housemate Liam suggested setting out to find the greatest 50 players of all time, this swiftly grew to 100, 150 and 200 before we settled on 250. Our original website www.top250.webs.com is still there to answer the debate but we furthered our work to blogging about the beautiful game starting up www.thefootballhistoryboys.blogspot.com.

"He was a leader, he had fantastic ability in the air and he was strong. He was a talisman. I played about four of five games with him with England at the end of his career and I felt that he was the one that was in charge."
Sir Bobby Charlton

"A blisteringly fast forward and prolific striker, Blokhin was one of the best players in the history of the Soviet Union… He was also one of only five players from the old communist era to be named European Footballer of the Year, an award he won with Kiev in 1975." Daily Mail

"The Mexican keeper is most often remembered for designing his own garish shirts, but he too had an eye for goal - and scored 38 in his career. In his early career, his first team place was blocked by a more established keeper, so he got games as a striker (scoring 14 goals in his first season). Later in his career, when his team were struggling for goals, a substitute keeper would be brought on and Campos would finish the game up front - once scoring an impressive bicycle kick for Atalante in 1997 in a game he started between the posts." The Independent

"A goal scoring machine that broke records for fun.  Goals that brought multiple league titles to Ibrox during his time as a player… Super Ally’s contribution to Rangers and Scotland as a player was truly remarkable; he represented the club with a smile and certainly his playing feats alone will never be forgotten – his place in The Scottish Football Hall of Fame is a testament to that." www.therangersstandard.co.uk 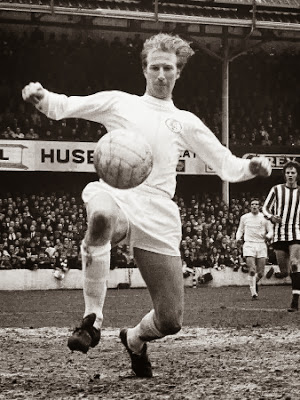 "He was a true giant physically and metaphorically. By far the superior Charlton brother he commanded his defence as much as he commanded respect. The fact he played over 600 times for Leeds just shows the dedication and professionalism of the man. A Leeds legend."
Friend of TFHB and Leeds fan Anthony Lewis

"I've never really forgiven Italian football, and Juventus, for buying my favourite player in 1980. Liam Brady was my hero and a footballing genius. I saw him from the North Bank as he scored against Manchester United in 1978. Later, I watched with awe as he destroyed Tottenham at White Hart Lane with one of the greatest goals ever seen on UK TV" John Foot in 'Winning at All Costs: A Scandalous History of Italian Soccer'

"I think people forget just how good Deco was, he wasn't just an ordinary player to have won league titles in 4 different countries as well as make over 550 career appearances. I was so excited when the little playmaker came to the Premier League, even if it was playing for Chelsea!" Gareth - TFHB


“My nerves were settled by a fantastic volley from Romario that put us in front before Bebeto received a long pass that put him face-to-face with the goalkeeper. Calmly, the striker tricked the Dutch keeper and tapped in Brazil's second goal. The celebration that followed has never been forgotten. Bebeto's wife had just given birth to his son, and to honor him, Bebeto was joined by Mazinho and Romario, the trio making the form of a cradle with their hands.”
Goal.com

"Caniggia was rapid and that's an understatement! To illustrate, not a great quote about the man, no much more one of the worst tackles ever on him. If TFHB were to do a Top 10 Worst Tackles, this would be there: Benjamin Massing of Cameroon hacks him down in World Cup 1990 as he speeds away in the last minute after hurdling 2 previous challenges."
Gareth - TFHB (The moment is too good not to reference!)

"If 'Boys Own Paper' had cast a character as a good looking, blond haired, clean living footballer, who became the captain of England's top club, won the FA Cup and several League Championship medals, was selected to play for England's national team, went on to captain it a world record 90 times, became the first man on earth to receive 100 international caps, played in world record 70 consecutive international matches, captained England to 3 consecutive World Cup finals, and in a career of nearly 700 top flight games was never either cautioned or sent off by any referee, was idolised and adored by the whole nation, became world famous and married the glamorous queen of pop music, and that the two of them lived 'happily ever after', then readers would say this was all too unbelievable. Yet however fantastic it may seem, for Billy Wright this was no fairytale, it was the real story of his life…" www.sirbillywright.com (Visit this site to support the campaign to get Billy Wright posthumously knighted, something TFHB support)