Brazil took the Jules Rimet trophy home with them in 1970 after winning the Mexican World Cup, their third in total at the time. They were the first side ever to do this and they did so in the space of just twelve years, between 1958-1970. This Brazilian team is still considered to be one of, if not the, best national side of all time. With the exception of the France side of 1998 our previous World Cup blogs have looked to tell the story of the headlines which have been somewhat lost in translation. Wales in '58, East Germany in '74 and USA's triumph over England in 1950. However, the 1970 World Cup was won by Brazil...and quite frankly was all about Brazil.

Their third global victory was the major story of the 1970 World Cup. They played six games, winning them all and scoring a total of nineteen goals in the process, eleven of which came in the knockout stages. Brazil capped a fantastic tournament with a comprehensive 4-1 win over Italy in the final, including a spectacular final goal scored by full-back Carlos Alberto, in which eight different Brazilian players were involved in a passing move, which started at the edge of their own box.

Pelé, who is regarded as the best player in football history, spearheaded their attack throughout the tournament, which also contained Jairzinho, Gerson, Tostao and Rivelino. Pelé scored six goals in six qualifying matches. What is more, he scored a further four during the tournament and played a part in fourteen of Brazil’s nineteen total goals, including his assist for that spectacular final goal in the final. He was also named as player of the tournament, winning the golden ball award.

What about their run to the final? Firstly Brazil were drawn against holders England, a side with the memories of '66 still very fresh in their thinking. When the two sides met, the South-Americans won 1-0, Jairzinho inflicting the damage on Alf Ramsey's men. Despite defeat, the game is remembered fondly in England for two reasons - Gordon Banks' save from Pelé (arguably the greatest ever) and Bobby Moore's beautifully timed challenge on the goalscorer, described as the "perfect tackle." It was a win which showed Brazil were hungry and ready for another trophy to highlight their global dominance. 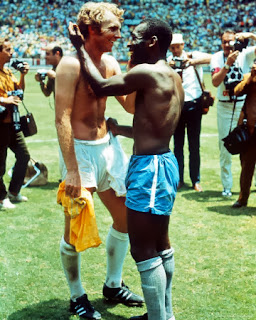 Further victories over Czechoslovakia (4-1) and Romania (3-2) propelled the samba nation to the quarter-finals where they met fellow South-Americans Peru. Tostao did the damage with a brace, adding to Rivelino and Jairzinho's goals to win 4-2. Uruguay were up next, and were no match for Mario Zagallo's side, 3-1 the final score and a fourth World Cup Final against twice winners Italy awaited. Italy themselves had memorably reached the final, playing out the "Game of the Century" against top scorer Gerd Muller's West Germany. The heroics of Luigi Riva, Gianni Rivera and Giacinto Facchetti still fondly remembered on the Italian Peninsula. The 4-3 extra-time victory is so commemorated - it even has a plaque outside Mexico's Azteca!

In 1999 Pelé was voted as the best player of the century by the International Football Federation of Football History & Statistics and in 2014 was awarded the Ballon d’Or Prix D’Honneur, his first Ballon d’Or award (he never played in Europe). Pelé scored a staggering 1281 goals during his career. Brazil never lost a match when Pelé and Garrincha played upfront together. His international performances have rarely been reciprocated since, only the most prestigious names in footballing history of Maradona, Cruyff and Zidane are worthy of joining Pelé.

The best player in the world playing for the best team in the world, it is no wonder this team dominated international football. But despite their incredible record is the 1970 World Cup Brazilian team still the best ever?
The modern day equivalent has to be Spain. Having won three internationals tournaments in a row, the 2008 European Championships, the 2010 World Cup and the 2012 European Championships, they have secured their place in international football history. Their ‘tiki-taka’ style of play makes them exciting to watch and is something that is trying to be developed by the majority of European football clubs. What is more, their team has unbelievable strength in depth, particularly in midfield. The somewhat ambiguous striking role - so often used as a "false nine" looks to be have been filled by Brazilian-born Diego Costa who looks capable of stepping into the starting XI.
This year will see Spain attempt to win back to back Wolrd Cups for the first time since Brazil managed the feat in 1958 and 1962. This would only be the third team to ever achieve this; Italy managed it in 1934 and 1938. If they can achieve that then they would have to be considered equal to the Brazilian squad of 1970, if not even better. Del Bosque’s Spain contains that ability to shock and amaze on the world stage with some wonderful football that includes plenty of possession, intricate passing and goals.

It is not often that an international side achieves such a feat on a regular basis. Ironically, the team I think that are most likely to prevent them from achieving World Cup victory this year is Brazil. Their Confederations Cup performances would have pleased even Pelé. Their young and talented team is full of potential and they will only get better from their recent impressive displays. Additionally, the emergence of Neymar as a genuine world-class player has seen comparisons being drawn with Pelé. Certainly, he can be considered as important to Scolari’s Brazil side as Pelé was to the class of 1970. There is potential in this current Brazil team that could see them flourish into a world dominating squad to rival the Brazil of 1970. For now though we can sit back and admire as they try and topple the Spanish pass masters.