By The Football History Boys - March 18, 2014
In February 2013 up in the attic bedroom of our student house, Gareth Thomas, Ben Jones and Ollie Jackson after another prolonged football debate decided it was time we did something about the question, 'Who is the best player in the World?'. Housemate Liam suggested setting out to find the greatest 50 players of all time, this swiftly grew to 100, 150 and 200 before we settled on 250. Our original website www.top250.webs.com is still there to answer the debate but we furthered our work to blogging about the beautiful game starting up www.thefootballhistoryboys.blogspot.com.

"At the peak of his powers there was no one capable of reading the game better than Alessandro Nesta. Elegant, graceful and capable of gliding out of Milan’s defence carrying the ball, he was the master of his art. Even though he was rarely beaten for pace, he patented the recovery tackle with his immaculate timing and showed remarkable composure in the most trying circumstances. He has been voted defender of the year four times in Italy, was part of two Champions League-winning teams at the San Siro and won the World Cup in 2006."
Neil Ashton, Daily Mail

"For his majestic performances at the 2006 World Cup in Germany. I haven’t seen a better defender than the Italian in that tournament. He had it all; a supreme athlete who was commanding in the air, comfortable on the ball and fearsome in the tackle. He was the leader and hard man of that Italy side, too. He didn’t pick up a single yellow card during the 690 minutes he played in the tournament and his performance in the final earned him the nickname ‘Wall of Berlin’. Lifting the World Cup on the night of his 100th cap was fitting for a player who a few months later was crowned world player of the year."
Matt Lawton, Daily Mail

"Schmeichel - labelled as the ‘bargain of the century’ by Sir Alex Ferguson - is for some, the best keeper ever to play for the Red Devils. The Dane won five Premier League titles, three FA Cups, the League Cup, and the Champions League in 1999 at United. He is widely regarded as the greatest goalkeeper in Premier League history, the Dane's heroic efforts provided clean sheets aplenty and the security at the back which was so key to United's success throughout the 1990s. Schmeichel, recruited for around £500,000, knew how to intimidate opposition strikers by making optimum use of his frame and at times appeared just as fearful for his defenders, who would frequently receive a rollicking from him. Capped eight glorious years with the club by skippering United - in the absence of the suspended Roy Keane - in the 1999 Champions League final as Ferguson's men secured the treble. The goalkeeper position would prove to be a problem for United after Schmeichel's departure until Edwin van der Sar arrived from Fulham in 2005."
The Independent

“Pirlo has the face of an angel, but he is a son of a bitch! He’s always making jokes, always breaking the rules. One time when I was eating at Milanello, I had the bright idea of leaving my phone on the table, and he sent a text message from it to Galliani and Braida offering them my sister!”
Gennaro Gattuso

"Throughout the world there are players who are head and shoulders above the rest. Pirlo is one of those who has marked an era. He would get in any team in any league in the world.”
Luiz Felipe Scolari

"A good defensive midfield player with vision and strength. I played with him at club and international level for many years and he was one of the best. He controlled the midfield with his presence, strength and technique. He would help start attacks, but make sure the other team couldn’t get at the defence. Provided a great balance to any team he played in."
Ruud Gullit, FourFourTwo - Best XI

"In a sense Gascoigne's career – so outlandish (for a top-level footballer) as to be barely credible, yet somehow obvious when put in the context of the wall-to-wall craziness of his life. In among the drama and trauma of that life was an equally erratic career, one that delivered fewer highs than his inordinate talent had promised but that still almost unfailingly brings a glassy-eyed smile to success-starved and glass-half-full England supporters.

Here was a maestro in the grand tradition, a fantasista who in his pomp would have walked into any team in the world -- and, despite what the tabloids say about the likes of David Beckham, Steven Gerrard, Alan Shearer and others, there have been very few of those. It is perhaps therefore no coincidence that both of England's semifinal appearances at major tournaments came with a relatively fit Gascoigne pulling the midfield strings, all imagination, power and balance, a balletic bouncer either ghosting past an opponent or strong-arming them out of his path."
Scott Oliver, ESPN FC

"He is an exceptional person and really doesn’t need to prove himself to anyone. Del Piero is a wonderful man and player."
Mauro Camronesi (TFHBTop250 #243)

"Del Piero is a champion with extraordinary technical ability and wonderful characteristics. When he is selected he never disappoints. He is an example to us all. He has great skills and intuitions that few other players have. He is a captain in the real sense of the word".
Marcello Lippi

"When writing an introductory paragraph on the astonishing Liverpool career of Welsh striker extraordinaire Ian Rush, there is only one sentence to possibly choose: simply the greatest goalscorer in Anfield history. Ever since the club was founded, Kopites have been privileged to watch a succession of predators ply their lethal trade - but Rush surpassed them all with his statistics of 346 goals in 660 appearances. It's a record which could stand for eternity. Quick, agile, incredibly fit and hard-working, the No.9 converted strikes from every scenario imaginable during his 16 years with the Reds; although his speciality was lurking inside the penalty box, Rushie was adept with his head and capable of the spectacular. The Welshman's intuitive partnership with Kenny Dalglish will go down as arguably the finest Liverpool supporters have witnessed. If that is not enough, Ian was also the team's first line of defence as they dominated English and European football throughout the 1980s, pressing and harrying opponents into mistakes with his ceaseless running."
Liverpool FC - Players Who Shook The Kop - #3

"For me 'one-club-man' Iker Casillas has to be regarded as one of the best goalkeepers of all-time. Alongside Victor Valdes he is the most decorated number one in the game - (Just Casillas actually plays for Spain, unlike his Catalan counterpart). Recently Diego Lopez has replaced Iker between the sticks at the Bernabeu, a decision still questioned by many, considering he has been in the starting XI for Real Madrid since he was 18! His incredible 153 caps (so far) for Spain highlight just how important he has been to the global dominance of La Roja. It is often forgotten that he is also the Spanish captain, leading by example both on and off the pitch - surely if he leads the Iberian nation to a second consecutive World Cup in July, he'll have to be regarded as the best ever."
Ben Jones - TFHB 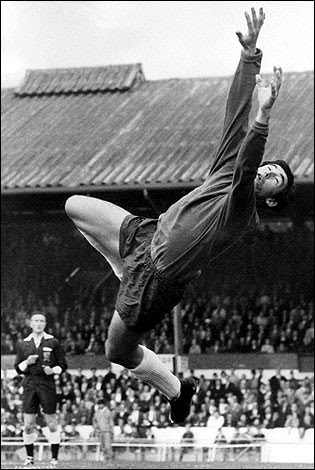 "‘Gooool’ bellowed the distinguishably deep voice of Pele as his firm, downward header edged past Gordon Banks on what was, to 67,000 fans at the Estadio Jalisco and the millions watching across the globe, a journey destined to end in the bottom corner of the net. The Englishman refused to subscribe to destiny, however, despite admitting thereafter that he thought there was no chance he could denyO Rei under sweltering temperatures in Guadalajara.

But that is exactly what he achieved in the Group 3 match at the 1970 FIFA World Cup Mexico™, hurling his body down to his right, arching his arm backwards, outstretching it to a distance that almost defied physics and, with his thumb, miraculously flicking the eye-catching adidas Telstar round the upright and out for a corner – all in the swiftest of movements.

'From the moment I headed it, I was sure it had gone in,' recalled Pele. 'I had already began to jump to celebrate the goal. Then I looked back and I couldn't believe it hadn't gone in.'

It remains the most renowned save in football history."
FIFA

Voted for by the public between Aug-Dec 2013