By Gareth Thomas - March 07, 2014
In February 2013 up in the attic bedroom of our student house, Gareth Thomas, Ben Jones and Ollie Jackson after another prolonged football debate decided it was time we did something about the question, 'Who is the best player in the World?'. Housemate Liam suggested setting out to find the greatest 50 players of all time, this swiftly grew to 100, 150 and 200 before we settled on 250. Our original website www.top250.webs.com is still there to answer the debate but we furthered our work to blogging about the beautiful game starting up www.thefootballhistoryboys.blogspot.com.

"Very rarely are football terms named after the footballers themselves, one example is of course the famous Cruyff turn, but the most famous of our generation is “The Makelele Role”.  The Cruyff turn epitomizes the skill and the footballing brain of its inventor, but total football’s most famous man has an unlikely successor. Claude Makelele’s role at Chelsea under Jose Mourinho when they won the Premier League title was named after its inventor." www.thefalse9.com

"Schmeichel was a warrior you know? He lambasted every defender in front of him, so aggressive. But Edwin was so calm, which was fantastic for our defenders, but he was very different in the dressing room... There was a magnificence and calmness about him and he was great for our players... I just wish I'd got him when Schmeichel decided to leave." Sir Alex Ferguson

"Whatever you say about Samuel Eto'o, he knows where the goal is. Cameroon's record marksman, Eto'o was a serial scorer for Mallorca and Barcelona before joining Inter Milan in the summer of 2009. Work rate, aggression and an eye for goal are the key attributes of a player not afraid to voice his opinion and speak out against perceived injustices. Eto'o is the only African to have scored in two Champions League finals, having lifted the trophy with Barcelona in 2006 and 2009." Stewart Coggin, www.worldsoccer.about.com

"Northern Ireland have always had a reputation of producing first class goalkeepers, but very few people would dispute that Pat Jennings is the probably the finest of them all. Jennings glittering career spanned an amazing 22 years during which time he built up a reputation of not only being the best goalkeeper in Britain but undoubtedly in the world." Northern Irish Football Association
96. Jimmy GREAVES

"When Greaves played for England, he usually scored, amassing a hugely impressive tally of 44 goals in 57 games, including six hat-tricks – a record that stands to this day. In one five-game streak in 1960/61, he scored eleven goals. He was famous for always scoring on his debut, and his first national team appearance was no exception; he notched England’s only goal during a 4-1 defeat by Peru in May 1959." The Football Association

"Regarded as the greatest Italian player of all time, Giuseppe Meazza was much more than a football genius. With his triumphs on the pitch and his excesses off it, he was long seen as a symbol of social success in Italy, rising from a modest background to become a two-time world champion and legend of the game before giving his name to Milan’s famous football stadium. "Having him in your team meant you started every game 1-0 up,” his Italy team coach Vittorio Pozzo once said. “He was a born striker. He could read the game, understand situations and make the whole attack work by applying a concept of the game that was based entirely on technique.” www.Fifa.com 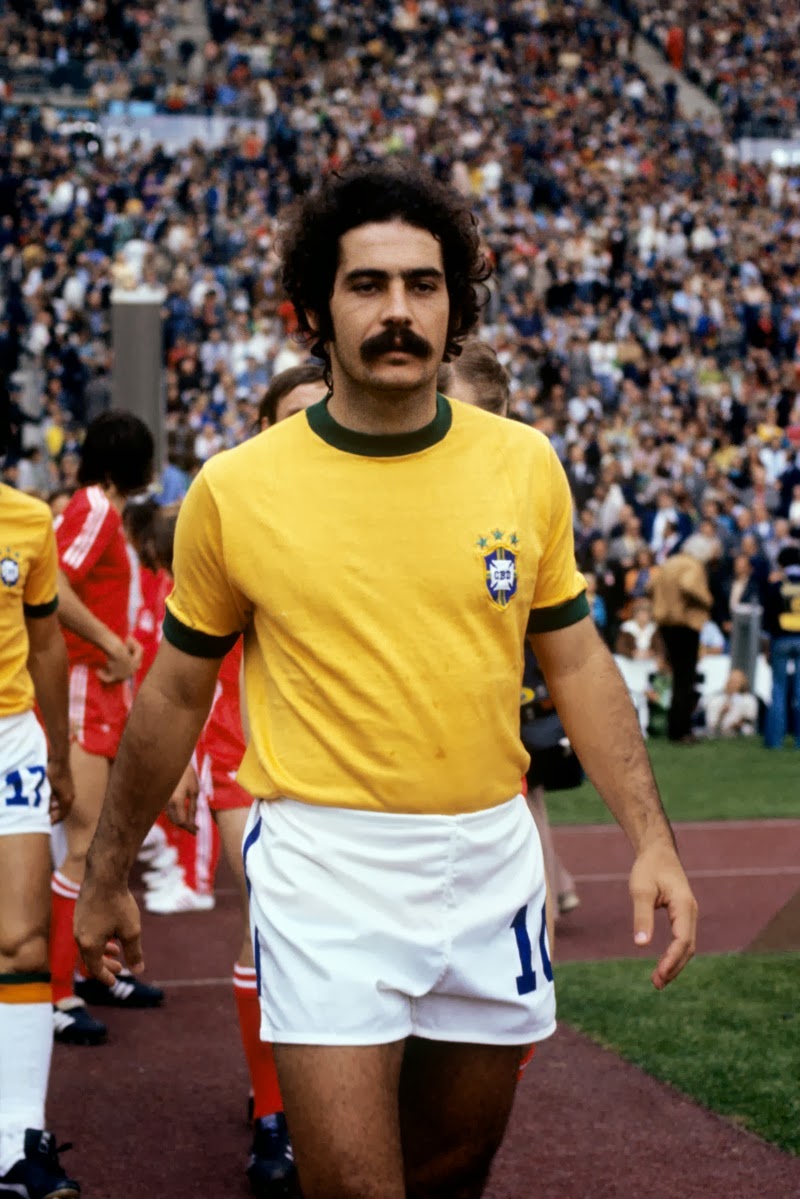 "The legendary and iconic Roberto Rivelino, born 1946 in Sao Paolo, featured in three World Cups for Brazil, including their third and most celebrated success in Mexico in 1970. Lining up alongside the likes of Pele, Carlos Alberto, Gérson, Tostao and Jairzinho, he played a key role in what is widely acknowledged as being the greatest football squad of all time. Lauded for his grace and style, Rivelino's dazzling array of moves, thunderous shooting and free-kicks, effortless distribution, quick-thinking and distinct control, secured his status not only as one of the best midfielders of his generation, but in the history of Brazilian football. He is credited with the invention of the 'elastico' (‘flip-flap’)." www.goalsoul.net

"A prolific goal-getter, Ruud van Nistelrooy’s scoring exploits at Old Trafford have safeguarded his place in United folklore. The Dutchman struck 100 goals in his first three seasons in Manchester. He overtook United legend Denis Law’s title as the club's all-time top scorer in European competition in his fourth term, and by the end of his fifth year at Old Trafford he’d reached 150 goals in fewer than 200 starts." Manchester United "Legends"

"For all the years spent refining his defensive technique with Monaco, Parma, Juventus and Barcelona, and his part in France's European Championship win in 2000, Thuram is probably best known for the two goals he scored in the 2-1 win over Croatia in the 1998 World Cup semi-final. These are commonly described as the 'most famous goals in the history of French football'." The Guardian

"Sir Alex Ferguson labelled him the best he's ever worked with, aspiring footballers and Reds everywhere worshipped the ground he walked on: Roy Keane epitomised the unwavering spirit and desire to succeed Manchester United stands for. Few sportsmen lead from the front in the way Keane did, on and off the pitch - and the fact that more than 70,000 United and Celtic fans paid their tributes to him at his testimonial before he retired in June 2006 says it all. Images of him rallying the troops, covering every blade of grass in the process define the 1990s for United. He was not afraid to speak his mind in front of the media, particularly if he felt his colleagues were not reaching the high standards he expected." Manchester United "Legends"