The 1990 World Cup remains arguably the most iconic of all World Cup's, just a mention of the phrase, 'Italia 90' is enough to make a certain generation of Englishmen (and Irishmen) turn bleary eyed with nostalgia over those four glorious weeks in the summer of 1990, four weeks which changed the lives of men such as Paul Gascoigne, David Platt, and Salvatore Schillachi forever. Despite this, Italia 90 is often, and perhaps unfairly, branded as a boring World Cup short of entertainment, with the proponents of this theory citing the fact that it has the lowest goals to game ratio of any World Cup as consummate proof of such a narrow minded thesis. Yes, defences ruled and the final was dire, and it is undeniable the tournament remains more iconic on these shores than anywhere else, yet to say it was a genuinely forgettable World Cup does a tremendous injustice to a tournament that was a feast of drama, romance and intriguing sub plots.

With the benefit of hindsight, from an English point of view, the tournament was an unqualified success. It is England's only journey past the quarter finals since the now mythical and distant year of 1966. The fact that the country were only a penalty shoot-out away from the final, (in a prime time TV World Cup for European viewers), a penalty shoot-out against West Germany, only adds to the idealised memories of England's on-the-field performances at this particular chapter of the World Cup. England simply got better and better, from dismal draws against Ireland and Holland, to a performance of such assured calibre against a strong West German side. England's run captivated a nation, and the semi final genuinely brought the country to a standstill. Paul Gascoigne's tears in Extra Time moved a nation, and were thus held up in the most brutal of contrasts to the way football and football fans were viewed in the late 1980's in Britain.

This leads on to the fascinating social and footballing backdrop in the United Kingdom against which Italia 90 was contextualised against. With the social upheaval of the 1980's over and Margret Thatcher's famously anti-sport government on its knees, combined with the fact the tournament occurred in the days before Sky TV's dominance and the now routine takeover of English clubs by wealthy foreigners, all meant the distinct impression that anything was imaginable, not just for football in this country, but for society itself was created.
The feel good factor that swept through England throughout and even after the tournament was unprecedented, and it seems unlikely that the craze ‘Gazzamnia’ could have materialised at any other point in England's footballing and social history. The ban on English clubs from competing in Europe since the 1985 Heysel disaster was lifted the day that the side returned home and it’s only thanks to the achievements of men such as Gary Lineker, Paul Gascoigne, David Platt and Chris Waddle that this was made possible. England were a force on the field, rather than off it, for the first time since potentially 1966, and certainly 1970. 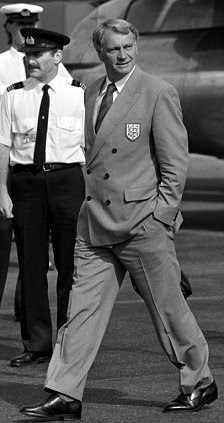 The England which graced Italy with such surprising presence of mind, and ability (at least in the semi final) was a flexible one both in terms of the players in the starting line up and in terms of the formation chosen by Bobby Robson with which to mould these players around. Like four years earlier in Mexico the formation England started the tournament with was discarded by Robson for one more suited to tournament play and the more cosmopolitan environment that comes with it.

After the mind-numbing draw against Ireland in England's opener (a game so dull it prompted the headline, 'No football, please, we're British') 4-4-2 was replaced by a 5-3-2; with Mark Wright and Des Walker in the centre back roles and after some shuffling, Terry Butcher in the Sweeper position. The three central defenders ensured greater defensive solidity, which in turn allowed more space and freedom for the creative talents in the side, namely Gascoigne, to give England a more creative and incisive edge than they would have had under the utterly outdated and too easily outmaneuvered 4-4-2.

For the first and perhaps only time in the national team’s history, England looked remarkably continental, and this goes a long way to explaining the side's likeability at the tournament, a likeability not harmed by the team picking up the FIFA Fair Play award. Even losing captain and playmaker Bryan Robson goes largely unremembered due to the way this side equipped itself at the tournament, his injury allowing Gascoigne even greater licence to dictate proceedings, in a way only Gascoigne could, and paving the way for the emergence of the revolutionary David Platt. Although this narrative does great injustice to Robson, who was unquestionably a fantastic player, further argument can be made that as good he was, his style was seen as archetypal of the English game, therefore suggesting his absence actually benefited the feel and style of the team, a style that served them so well.

It must be stressed that the English side possessed an extremely well equipped armoury in terms of dealing with the rigours of a four week tournament and in coping with the different challenges on the pitch and the various types of game likely to accompany a run deep into the knockout stages of a World Cup. There can be no better example of this than the contrast in terms of the type of match and style of performance between the quarter final in Naples against Cameroon, and the semi final in Turin against West Germany. (Almost as contrasting as the state of Northern and Southern Italian politics at the time, but that's another story).
Firstly, England had to find almost inhumane levels of reserve in the searing Neapolitan heat to first come back to, and then see off the tournaments surprise package and first African quarter finalists in the form of Cameroon. David Platt remarked that the African's "seemed built for boxing rather than football". With eight minutes left and with England seemingly heading home, Gary Lineker dispatched the first penalty that his country had been awarded in over four years, (spanning a remarkable 52 games) and then in Extra Time, Lineker, this time on the brink of exhaustion, scored from the spot again to put England through. 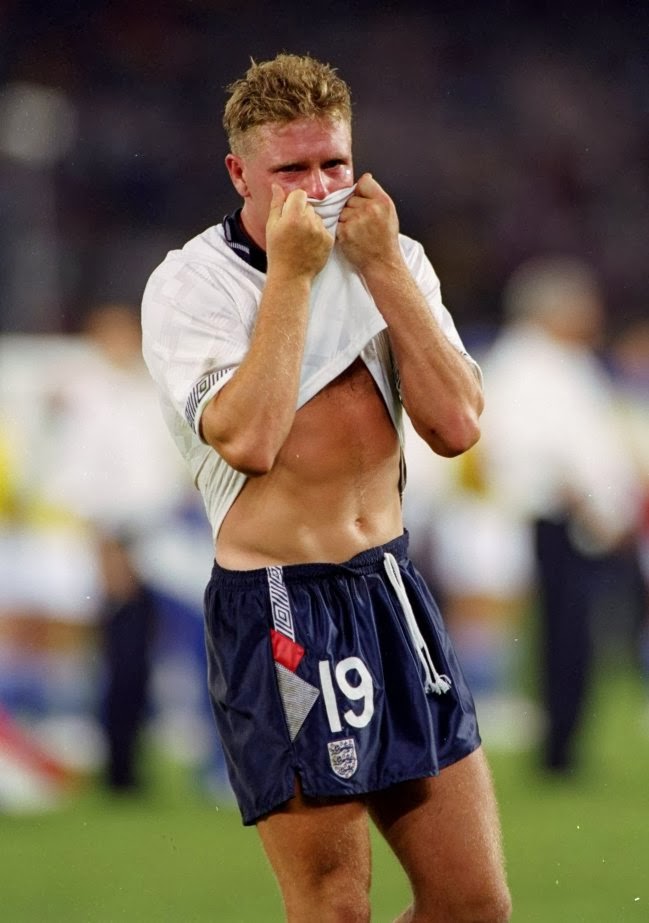 All this came after only squeezing past Belgium in the last 16 thanks to Platt's exquisite volley in the last minute of Extra Time. With the hysteria mounting back home, the story in terms of how the two teams faced up to each other in Turin, as mentioned before, couldn't have been more distant from the quarter final clash. The brutality and strength of Cameroon was replaced by the elegance and sheer class of a West Germany side hell bent ( in an aesthetic way) on avenging the miserly fact they had lost the two previous World Cup finals.

The game was magnificent and was incredibly balanced, so as perverse as it sounds, a penalty shoot-out was perhaps the fairest way of deciding the match. Lineker's equaliser with ten minutes remaining saw a brilliant touch and the opportunism of his strike was so true to his reputation; that it is fitting that this goal, of all the ones he scored, is perhaps the one he is best remembered for. The game, of course is chiefly remembered for Gascoigne's booking ruling him out of the final, and the resulting tears that after the years of hooliganism and thuggery that had blighted the English game showed the sport was capable of possessing an emotive side as well.


Whilst hopes of an English footballing renaissance in the wake of the 1990 World Cup fell profoundly on deaf ears, England's performances in Italy still reverberate through to the modern day with lustre. But as much as their run to the brink of the World Cup Final has to be seen as a majestic achievement, it would be foolish to suggest anything long lasting came of it in a tangible sense in terms of the team's subsequent fortunes after. England failed to qualify for the next World Cup, and have only been to the quarter finals twice in the 24 years that have elapsed since Chris Waddle sent his decisive penalty the wrong side of the crossbar in the Stadio delle Alpi on the 4th July 1990. Yet all this can be seen as part of the beauty and long lasting attraction of England's campaign. Nothing like it has been seen before or since in a foreign World Cup, and in a time of overpaid players consistently under-performing in the England shirt, it is hard to appreciate just how much emotional investment the general public had with this particular England side, and in some cases still has.

This piece was kindly written for TFHB by fellow Swansea University student Will Jeanes! Hopefully the first of many!
The World Cup