Scots on the Spot | @AlexHTheMAX

By Gareth Thomas May 28, 2022
Rangers penalty shoot out heartbreak in the Europa League final against Eintracht Frankfurt in Seville continued the dark side of Scotland's spot kick history which is chequered both in penalty competitions and in 90 minutes in big matches.
@AlexHTheMAX gives us some instances when Scottish sides failed from the spot and, don't fret too much Rangers, because you are not alone.
1. Dons Make History
Aberdeen were involved in the first ever penalty shoot out in European club competitions in September 1970. It was a Cup Winners' Cup 1st Round tie in Hungary against Honved, after the game finished on a 4-4 aggregate following both sides winning their home leg 3-1.
Steve Murray of the Dons scored the historic first pen in the then-new UEFA format. Jim Forrest then became the first to miss, hitting Aberdeen's third pen off the underside of the bar and out, before Honved eventually won 5-4 on pens.
Murray also scored a goal in normal play in both the home and away legs, while the German referee in Hungary for the 2nd Leg had to be reminded by the UEFA observer about the penalty competition as he led the teams off at full time, clearly forgetting the days of a third match to decide aggregate deadlocks were now history. 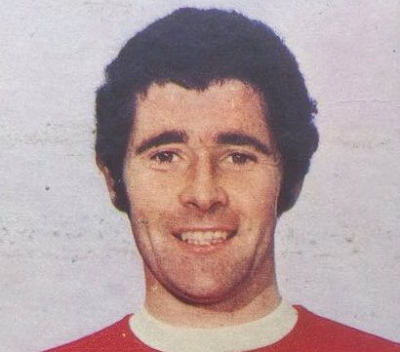 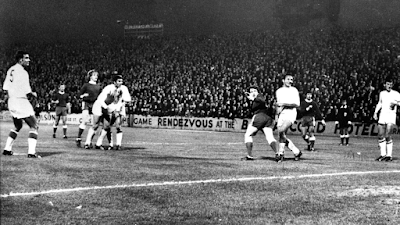 Above: Steve Murray of Aberdeen was a history maker in penalty shoot outs and the first to net in a UEFA club competition. Whilst Aberdeen play Honved at Pittodrie in the 1970 Cup Winners Cup 1st Round.
2. The Dixie Kick
Hard to believe now but in 1972 a European Cup Winners' Cup and a European Cup semi-final were played in Glasgow on the same night!
Rangers, in front of 80 000 supporters, overcame Bayern Munich 2-0 on the night to progress to the CWC final on aggregate at Ibrox and in the east end of the city. On the same evening Celtic were attempting to reach their third European Cup final in five years as they battled against Inter Milan, the team they had seen off to win the trophy in 1967 in Lisbon, in the white hot atmosphere of 70,000 at Celtic Park.
Following a 0-0 at the San Siro Stadium Celtic failed to break down Inter in the 2nd Leg over 120 minutes so the Glasgow giants embarked on their first ever penalty shoot out, and the first on Scottish soil, after a 0-0 aggregate finish. It is not well known that in 1970, despite Celtic reaching the European Cup final (losing 2-1 to Feyenoord in Milan), then Celtic Chairman, Robert Kelly, complained to UEFA about the toss of a coin deciding European club ties and shortly afterwards a penalty competition replaced a coin toss for games that were level on aggregate with the away goals rule unable to decide the tie (away goals rule brought in in 1965 and abolished in 2021).
Inter would win the 1972 spot kick shoot out 5-4 with ace hoops striker John 'Dixie' Deans, who had replaced Kenny Dalglish as a substitute in the match, launching the first Celtic attempt over the bar.
Jock Stein had prepared for a penalty competition the day before at Celtic's base at Seamill in Ayrshire and had selected the original five penalty takers based on a spot kick session in training with Deans being included on the list for the Inter match because he was the best penalty taker on the training day! 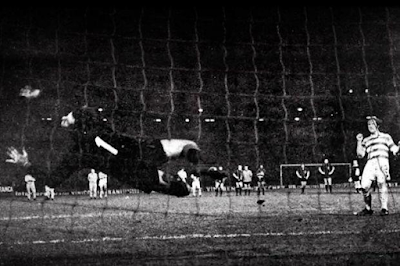 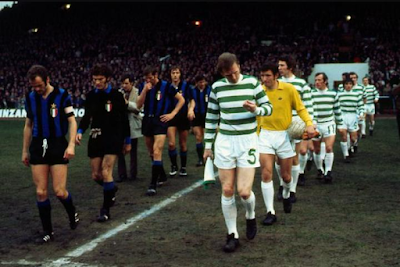 Above: Over the bar and far away as Dixie Deans fails from the spot v Inter Milan in front of 70,000 fans and the teams emerge for the 1972 semi-final showdown.
3. Scotland on the international spot
Scotland at international level suffered heartbreak in the 1989 Under-16 World Youth Cup Final at Hampden when Saudi Arabia beat the young Scots (managed at the time by Craig Brown) 5-4 on pens after a 2-2 draw after extra time amidst allegations of over-age Saudi players. The SFA chief at the time, Ernie Walker, was tipped off a year after the Saudi victory by a reliable source that one of their players was infact a captain in the army and a married father of three!
Outside that shoot out in 1989 Gary McAllister's pen miss v England at Euro 96 in normal time (an equaliser if he'd netted) and Don Masson's crucial miss v Peru at World Cup Argentina stand side by side as Scotland's two greatest spot kick sins outside actual penalty competitions to settle matches.
Ex Middlesbrough, QPR, Derby County and Notts County stalwart Masson said a couple of years ago that he still gets flashbacks regarding his penalty miss v Peru in the 1978 World Cup in Argentina.
Everybody knows that Scotland's opening two games of the tournament against Peru and Iran were their downfall but it is sometimes forgotten that Scotland had the chance to retake the lead against the Peruvians at 1-1 after they had equalised an early Joe Jordan strike.
The second half pen,rightly given,was taken by Masson and saved by Quiroga, a turning point in the game, with the Peruvians taking control soon after as Scotland heads dropped, and the two Cubillas goals that followed to make the full time score 3-1 are now written in World Cup legend. 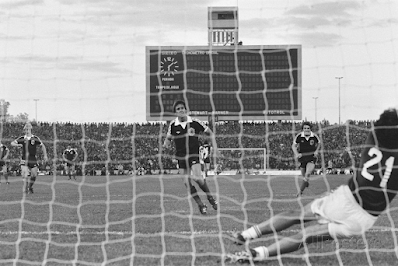 Above: Don Masson misses from the spot v Peru at 1-1 at World Cup Argentina 1978.
4. Hibs fail to hit the target
November 1973 saw Leeds United and Hibernian meet in a Battle of Britain in the UEFA Cup, but in a time when winning the domestic title was still as important as Euro success for most clubs, it was reported by some football hacks at the time that Don Revie wouldn't be too disappointed if Leeds went out to the Scots. The Elland Road club were fully focused on winning the First Division title, after finishing runners up three times in four seasons, although obviously the future England manager wouldn't admit such a thing publicly, but it was a lack lustre Leeds in the first game in Yorkshire as the visitors from Edinburgh somehow contrived to miss a host of chances and finish the game at 0-0.
Hibs again were not overawed by the team known as 'Super Leeds' in the 2nd Leg at Easter Road but once again it was scoreless in the Scottish capital so spot kicks would decide who went through to Round 3.
It would be Hibs legend and captain Pat Stanton who would be the odd man out as Leeds won 5-4 on pens with Scotland captain Billy Bremner netting the decisive kick after he had allegedly said to Stanton "you do know the whole of Scotland is watching" as the Hi-bees midfielder made his way up to take the first kick from 12 yards before hammering his shot off the post amidst the mind games.
Hibs made a lack lustre complaint to UEFA after the game that Leeds officials had encroached onto the pitch during the penalty competition, and also Bremner left the pitch during the shoot out (not allowed) for a drink of water, but Leeds pointed to sour grapes as it was clear the men in green and white had blown enough chances to win both legs before the pens.
Leeds also dropped five regulars for the 2nd Leg in Edinburgh with a 19 year old goalkeeper (John Shaw) injuring a hand in the second half.
His replacement (the Welshman Glan Letheren) was a 17 year old rookie so no wonder Hibs were peeved they couldn't finish Leeds off.
For the goalkeeping record Welsh international Gary Sprake had joined Birmingham City and his replacement David Stewart was unavailable. David Harvey was less than a year away from being Scotland number 1 but he played only in the 1st Leg at Elland Road. 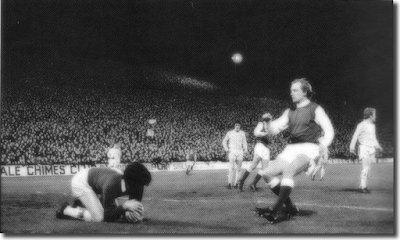 Above: Hibs v Leeds United at Easter Road in 1973 in the UEFA Cup.
5. History Repeating for Gers
Rangers suffered penalty heartbreak in Seville against Eintracht Frankfurt in the Europa League Final, but sadly there was a glimpse into the past as far as pens go when it was revealed the Gers had suffered in a Euro final before in a similar way.
In 1961, when it was Rangers v Fiorentina in the Cup Winners Cup final, the tie was over two legs.
The Gers were also the first British club side to contest a major European final.
Rangers unfortunately lost the first match 2-0 at Ibrox (4-1 on aggregate) with Gers Captain Eric Caldow missing a penalty. On that night in Glasgow the goalkeeper was apparently allowed to run out to the six yard line as he was taking the spot kick. 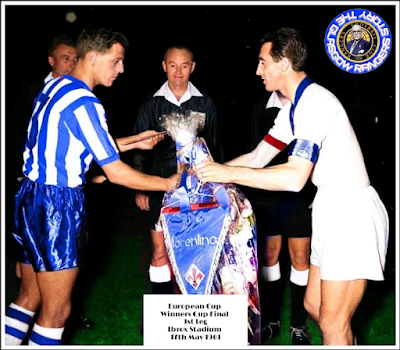 Above: Eric Caldow (stripes) and the Fiorentina captain in Rangers first ever European final in 1961.
By Alex Horsburgh, written for @TFHB.
©The Football History Boys, 2022
(All pictures borrowed and NOT owned in any form by TFHB)