By Gareth Thomas May 15, 2022
A familiar Scottish League name have joined the ranks of football pools towns now in the 5th tier of the game north of the border.
@AlexHTheMAX witnessed history on May 14th, as Cowdenbeath were replaced by Bonnyrigg Rose Athletic in the SPFL in the Scottish Pyramid play-off final 2nd Leg at Central Park. Cowedenbeath had beenca mainstay of the lower reaches of the Scottish game since 1917. Read his story below... 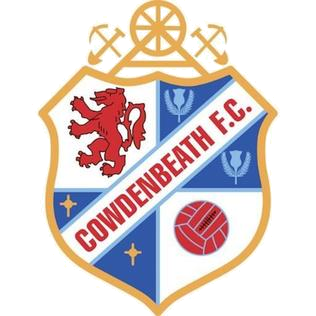 Walking through the centre of Glasgow in a blue, albeit rugby style, shirt on the day Celtic are celebrating a Scottish League title might seem to many as negotiating a bit of a tightrope, but this was no act of Rangers blue nose defiance ahead of the Europa League final.
While Glasgow was gripped with green and white mania on Saturday May 14th, as Celtic prepared for their triumphant final league game of the season at home to Motherwell, I was heading back to my home town in the east of Scotland by train looking for a blue and white miracle, that was about as far away from the top of the Scottish Premiership as you could get. For this was all about the blue and white of Cowdenbeath playing Bonnyrigg Rose Athletic for a place in Scottish League 2.
Former Junior side Bonnyrigg were 3-0 up from the 1st leg, played in Midlothian on May 7th, but there was still a feeling the self styled Blue Brazil could live up to their nickname amongst many locals, as I made my way along Cowdenbeath High Street two hours after escaping for the day to the possible scene of a great escape ("the old home town looks the same as I step down from the train": to quote a famous Tom Jones lyric).
Programme bought, club shop (portacabin) visited and 50/50 Half Time draw ticket bought I take my seat in one of two Central Park stands (the newer one built in the 1990s after part of the original huge Central Park wooden stand suffered a fire), and I talk to some familiar faces from a past life as to the chances of a Lazarus-like Cowdenbeath comeback. 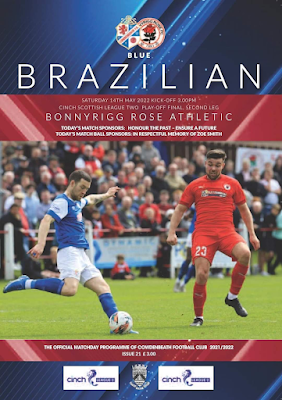 Cowdenbeath FC's award winning programme (above) was a collectors item on May 14th, and restricted to two copies per supporter, after ebay re-sellers descended to attempt to buy in bulk.
The home team decide to wear their all black away kit, brought in this season to celebrate Cowdenbeath's mining roots, for this final home fixture of season 2021/2, it might also be the last home match in a 117 year run in the Scottish League for the Fife side, which started in 1905 with a 1-0 home win over Leith Athletic at North End Park, Cowdenbeath's ground until 1917 before the move to Central Park.
Despite a healthy attendance of 2117 inside Central Park (average Cowden home crowd this season around 300) it's a subdued atmosphere with a big away contingent (five supporters buses from Bonnyrigg) not as loud as you'd expect, despite being 90 minutes from a first crack at the SPFL, while the tension amongst Blue Brazilians is in keeping with what is at stake (Bonnyrigg and Cowdenbeath were both formed in 1881 but only one will prevail on this sunny Saturday).
Ex-Rangers player and former Notts County assistant boss Maurice Ross, has his Cowdenbeath team set up to play for a first half goal that will bring hope but there is a bit too much caution in the home eleven for a do-or-die fixture.
One can maybe understand that Cowden caution following a soft penalty and a questionable sending off being awarded against them in the 1st Leg, but at a time when the kitchen sink has to be thrown we see the home team in microwave oven mode waiting for the ping of an opening goal to reward their patient build up.
There's a scuffed Cowden shot off the post and a scramble in the Bonnyrigg six-yard box which sees the ball on the bar, but the visitors are comfortable in the first half. These Cowden half chances do little to raise the home fans at the end of the first 45 minutes, while the more hardcore element in the visiting support can see games against Elgin City, Albion Rovers and Stenhousemuir looming. Although, in that curious Scottish style, they seem as keen to remind Cowdenbeath they're on the brink of relegation as theu are celebrating their own team's impending promotion.
We hear at the interval one of Bonnyrigg's suspended players is throwing up his carry out in the terracing toilets so for one person at least it looks like the celebrations have already began!
The second half sees Cowden still probing for an opener and playing better than they did at Bonnyrigg in the first game, but with a continuing cautious approach that is starting to annoy some Fifers, and then comes the turning point in the match.
Cowdenbeath 0-1 Bonnyrigg - Neil Martyniuk scores from the spot after referee David Munro awards a penalty following Ross Gray being swiped down in the box after 62 minutes. It looks soft but Bonnyrigg's penalty expert cares little as he follows up his 1st leg kick from 12 yards with another pen worthy of a higher level. For some of the Cowdenbeath contingent, that's game over and they're off to drown their sorrows in renowned local pub Wee Jimmies, and even I'm tempted to join them at the bar early as my home town team are going out the league with a whimper.
Cowdenbeath have a late flourish in the last ten minutes, with their former Chelsea Academy forward Sammy Omperon my bet to score Cowden's historic last league goal, but the consolation won't come and the full time whistle finally brings an end to the agony as Bonnyrigg win 0-4 on aggregate.
There are a couple of dissenting voices amongst the home support as the Cowden players and management team troop off, with Bonnyrigg now celebrating in front of their terracing fans, but the Blue Brazil majority take it pretty well, this is, after all, Cowdenbeath's third league survival play off since 2017 and even in a tough little former mining town they know football Russian roulette can only have one outcome.
It's been coming since Christmas but now it's confirmed, as Bonnyrigg are awarded their play off trophy on the hallowed Central Park turf, Cowdenbeath will play in the 5th tier Lowland League for the first time with new opponents such as Stirling University, Spartans of Edinburgh, Gala Fairydean Rovers and Celtic and Rangers B teams on their fixture list from August.
It's the end of an era and we head for Wee Jimmies pub meeting the inevitable English fans of Cowdenbeath (one from Brighton and one from Derby) on the way.
It's a long way to come for a wake but the legend of Cowdenbeath extends beyond the east of Scotland and the hurt is just as real for the groundhoppers as it is for the average Fifer who has seen the Blue Brazil over many years.
Thanks for the Scottish League memories Cowdenbeath, it's been emotional, but as that other Central Park sport of Stock Car Racing gets ready to own Saturday night I head back west to be greeted on arrival in Glasgow with that other Scottish League world of hundreds of Celtic supporters still in full celebratory mode at 8.30pm.
It's a long, long way from Cowdenbeath and the Lowland League. 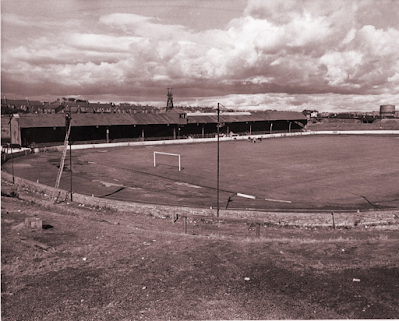 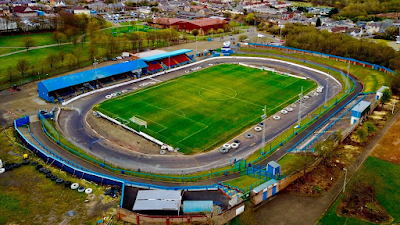