Cowdenbeath: The End or A New Beginning? | @AlexHTheMAX

By Gareth Thomas May 11, 2022
It is advantage Bonnyrigg Rose Athletic FC as the Lowland League (5th tier) Champions, who beat Highland League winners Fraserburgh to earn the right to play for a place in Scottish League 2 next season, start with a 3-0 lead at Cowdenbeath in the 2nd Leg of the Scottish Pyramid play off final on Saturday May 14th.
The 141 year old Fife side, nicknamed The Blue Brazil, need a comeback worthy of Lazarus himself if they hope to preserve their 117 year league status, which started in 1905 with a 1-0 home win over Leith Athletic at their first home North End Park before a move to Central Park in 1917.
@AlexHTheMAX presents more pictorial history from Team 42 in this season's SPFL, who will either finish the weekend replaced by the Midlothian reds in League 2, or as the heroes of a third Pyramid play off win, which would see a great escape that would even better their last day aggregate wins over East Kilbride in 2017 and Cove Rangers a year later. 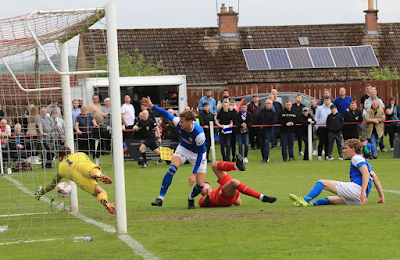 Above, Bonnyrigg (in red) score their first in a 3-0 win over Cowdenbeath at New Dundas Park on Saturday May 7th in the 1st Leg of this season's Pyramid play off final in Scotland.
Changed days for Cowdenbeath (below) as 52 years ago they were facing up to 1970 European Cup runners-up Celtic in Glasgow and at Central Park as part of the then 18 team Scottish First Division. John Hughes battles two Cowden defenders at Celtic Park and a ticket from the return league match in Fife. 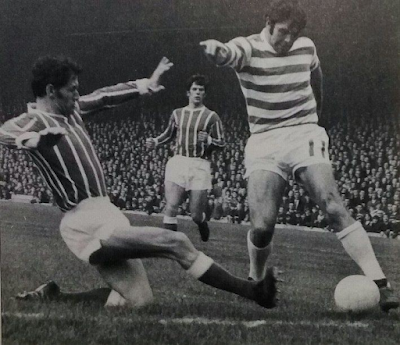 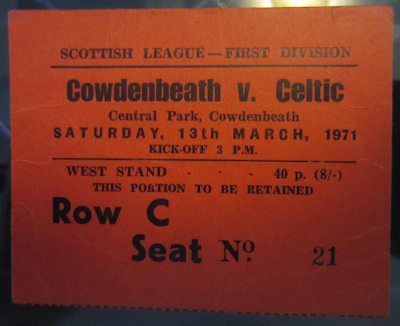 Sadly, Cowdenbeath survived just one season in their last top flight foray in season 1970/71. Rangers thrashed the Fifers 5-0 at Ibrox (pictured below) in the league with a young Derek Johnstone netting a hat-trick. The return league game was scheduled as Rangers first away fixture of 1971, but was delayed due to the Ibrox disaster and when it was eventually played Rangers won 3-1. The Gers also beat Cowden 2-0 in the League Cup semi-final of 1970 at Hampden.

Another League Cup semi-final for Cowdenbeath (v Hearts) at neutral Easter Road, home of Hibs, in 1959 (below).
Similar to the England v Scotland game two years later, which ended with the same score, the underdogs trailed their more fancied opponents 4-3 before a runaway flurry of goals late on saw a final scoreline of 9-3 for Hearts, as It would be for England at Wembley 1961. 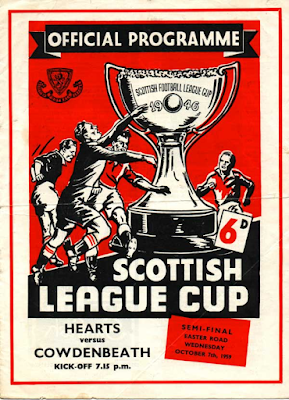 Cowdenbeath have fallen far since this limited edition pin badge was produced for their second tier fixtures with Rangers at Central Park. Cowden even managed a 0-0 home league draw with a club now on the brink of winning the Europa League. 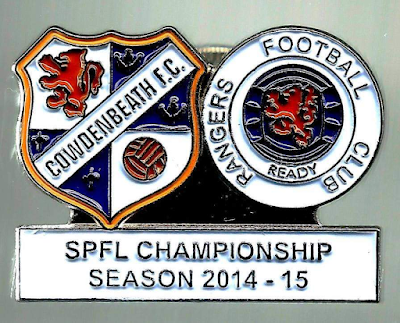 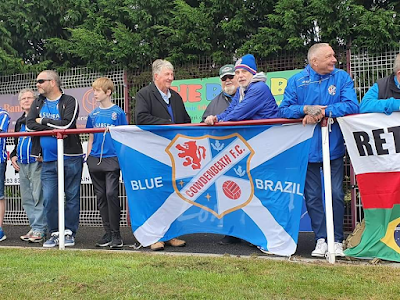 Cowdenbeath fans at an away game at Kelty Hearts FC this season (above). Kelty is just three miles from Cowdenbeath and the former non-league club won Scottish League 2 in their first season as an SPFL club this term. That certainly adds insult to injury should Cowden end up replacing their local rivals in the Lowland League.
The gates of New Dundas Park before the 1st Leg of Bonnyrigg v Cowdenbeath on May 7th (below). A chapter closes in the league history of one of Fife's five SPFL clubs if they can't overturn the 2021/2 Lowland League Champions 3-0 lead in the Pyramid play off final. 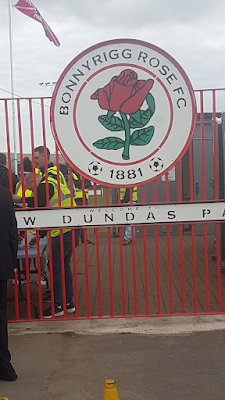 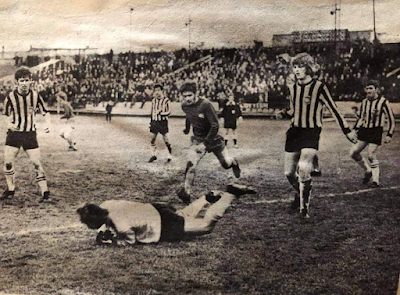 1972 and 1973 saw Cowdenbeath go close to retaining top division status following relegation in 1971. Central Park saw some classic Division 2 battles in those years with some great Scots on view. Future Leeds United and Man U legend Gordon McQueen above (stripes just behind the goalie) couldn't stop Cowdenbeath winning this league fixture 2-0.
Future Spurs star John Duncan below (in dark blue) battles the Cowdenbeath defence as a Dundee player in the Fife side's first top tier fixture in 31 years in August 1970 at Central Park. Cowden's previous promotion to the First Division was declared null and void after six matches in season 1939/40 due to the start of WW 2. 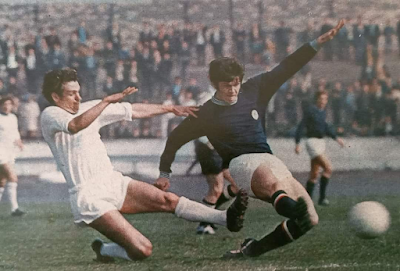 When hostilities ceased in 1945 Cowdenbeath were told their promotion and title win wouldn't be recognised and they never managed promotion again until May 1970 when they went up as runners-up to a Falkirk side which featured two future Scotland managers playing up front for them in the shape of Andy Roxburgh and Alex Ferguson.
Bonnyrigg or Cowdenbeath...who will prevail at Central Park on May 14th? Let us know who you are backing. 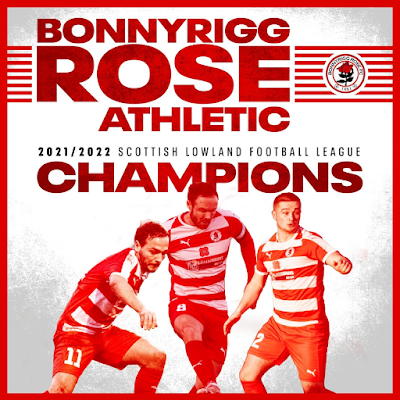 By Alex Horsburgh, written for @TFHB.
©The Football History Boys, 2022
(All pictures borrowed and NOT owned in any form by TFHB)