Halifax Town: The Shay Do Well

By The Football History Boys - July 31, 2020
In the modern game, we can often get swept up in the trials and tribulations of clubs in the top-flight. It has caused a divide between the bigger and 'smaller' clubs. One of such sides are Halifax Town. Notable for their remarkable FA Cup runs they would make it a habit of reaching the later rounds. Their Fourth Round tie against Stoke City on January 31, 1953 turned out to be one of the many great days the club experienced. In fact, this wasn’t even the first time they went on an impressive cup run. In 1933, they made a run to the fifth round by not seeing a side higher than their third tier status. Twenty years later, however, upon reaching the fifth round, their journey would see a number of top-flight sides succumb to the might of the Shaymen.

Founded in 1911, Halifax Town's earliest days would see the club feature initially in the Yorkshire Combination and the Midland League before becoming a founding member of the Third Division North.

The interwar and post-war period was dominated by the struggle to avoid relegation and if near the bottom, earn re-election each season. It would be the appointment of Gerry Henry as manager in 1952 that helped add some grit to the team. Henry didn’t help them earn promotion, but kept them midtable which was a huge upgrade in their form. Their 1953 FA Cup run almost ended before it started, as non-league Ashton United almost took them out in the first round. Once that scare was taken care of, Halifax would begin their impressive run. They made it to the third roundby beating a side in the First Division, Cardiff City. The Bluebirds were back in the First Division after gaining promotion are year earlier. 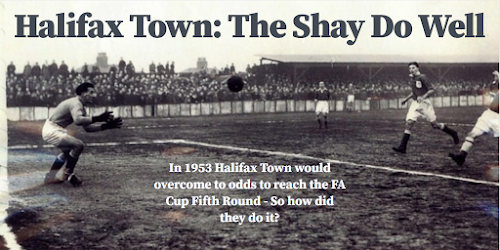 Cardiff was battling against relegation at the time, so their meeting against Halifax Town came when City was at its most vulnerable. The directors of Halifax Town planned to sell out the match, but were left disappointed by a lack of interest from spectators. The club had to return 500 tickets from underwhelmed supporters but Halifax had their way, winning 3-1.

This moved the club onto another First Division side. This time it was Stoke City. Like Cardiff, Stoke was reeling. Bob McGrory had just resigned after a number of inconsistent seasons following the acrimonious departure of club legend Stanley Matthews. Frank Taylor came in, but the Potters were off to a bad start, though by the time they showed up to play Halifax they were showing some good signs. Town player George Holt was sent to watch Stoke on a scouting trip against top of the table West Brom, which was a 5-1 shock win for Stoke. Despite the victory, his report afterwards was that Stoke had many weaknesses to exploit.

The Shaymen were without their first choice keeper, so they had to debut the new signing Frank Elliott in his first top flight game. Unlike the Cardiff match, the directors could smile at the turnout as the fans queued up for well over an hour before the gates opened. When the turnstile counters finished their work they could record a record attendance of well over 35,000 in the stadium.

Stoke put the foot to the gas in the first part of the match looking to end Halifax fast by peppering the goal with shots. All were proven to be wasteful but it was shown that Stoke was here to play. For the Shaymen, opportunities at the other end were very limited. Just before halftime a shot on goal from Stoke was saved well by Elliott. This completely sapped the confidence out of the Stoke players just before the break. 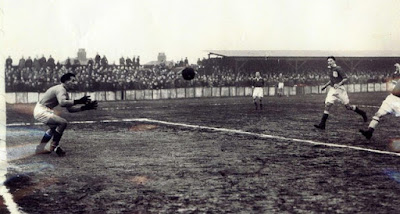 Into the second half, the wind was at the back of Halifax. They came out as the better side, playing very entertaining football. Both keepers were kept busy. The Shaymen had their first shot on goal in the first part of the second half. A goal from Derek Priestly finally put the Potters away to see Halifax through to the Fifth Round. Against 1951 league winners Tottenham, that’s where the run ended as Spurs dispatched the minnows 3-0 at The Shay. Played in heavy snow - the conditions did little to help Halifax upset the odds.

Halifax's recent history has been turbulent to say the least. For all their FA Cup successes, they failed to reach as far as the fifth round again. In 2008, the club was dissolved following financial trouble and eventual administration. Fortunately, Halifax Town AFC was reformed a month later under the new name FC Halifax Town. The side has since earned its place back in the National League following a decade of battling their way up from the Northern Premier League Division One North. In 2016, they would even add a piece of silverware after triumphing in the FA Trophy at Wembley. 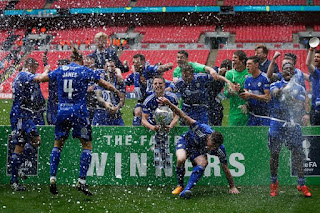 This season, Halifax would fail to reach the first round proper, falling at the final qualifying hurdle to Harrogate Town. In the National League, despite having their campaign finished early due to Covid-19, they would reach the play-offs only to fall to the hands of Boreham Wood. Next season offers The Shaymen a real chance to improve and hopefully reach the Football League once again. Watch this space!
This piece was kindly written for @TFHBs by Stephen Brandt - you can follow him on Twitter
@StephenCBrandt
©The Football History Boys, 2020