By Gareth Thomas June 02, 2020
As part of a series of Scottish football history articles written for us by radio presenter Alex Horsburgh, today he considers some of the best kits in Scotland...

As Hibernian FC launch their NHS 'away' kit to follow on from their idea to carry a 'Thank You NHS' logo on their iconic green and white home shirt when Scottish football finally returns [£5 donation from every fan going to Lothians Health Foundation]. Our Lockdown writer Alex Horsburgh pens another piece as the tentative phase one of moving out of Lockdown begins north of the border.

Everyone will have their own favourite of course, but this time it's his top five iconic Scottish football strips, which are purely personal picks, compiled over 50 years of watching the UK game:

Following on from England's deal with Admiral Sportswear in 1974, which saw Three Lions manager Don Revie bring in the first concept kit for one of the home nations, Scotland followed the trend with a more understated set of Umbro diamonds on their famous dark blue shirt/white shorts and red socks.

The kit was launched in time for the British Home International series at the end of season 1975/6 and gained instant success as Scotland beat Wales 3-1, N.Ireland 3-0 and England 2-1, with all the games at Hampden due to the troubles in Ulster stopping Scotland visiting Windsor Park in Belfast.

The England game saw the visitors go 1-0 up but goals from Don Masson and Kenny Dalglish [who nutmegged goalie Ray Clemence with a shot from a Joe Jordan cross], was their second successive victory over the Auld Enemy in Glasgow. The manner of the winner in the 2-1 scoreline was particularly satisfying as England had beaten the Scots 5-1 at Wembley 12 months earlier after a nightmare display in goal by Rangers Stewart Kennedy.

The kit also featured in the infamous dismantling of the goals and tartan army pitch invasion of 4th June 1977. Scotland won 2-1 at Wembley to claim their first success in London for ten years, before it gained infamy at the Argentina World Cup where blue shorts were added to prevent colour clashes with Peru and Iran. Although it returned to its original form for Archie Gemmill's memorable goal in the 3-2 win over Holland which wasn't enough to take Ally MacLeod and co through to the second phase, but the dark blue shorts version of the kit is still somewhat revered north of the border.

The iconic white wing collar was replaced in 1980, although the rest of the kit remained the same, before Umbro brought in a new kit for Scotland's appearance at the 1982 Spain World Cup under Jock Stein.

Formed in 1888 the famous green and white hoops were first worn for a match v Patrick Thistle in 1903 with black socks worn with the white shorts until the 1930s.

The strip is a favourite worldwide and will forever be connected with the first British winning of the European Cup, when the Glasgow giants were the underdogs in their match in Lisbon v Inter Milan in the 1967 final before winning 2-1 after conceding an early penalty goal.

Various interpretations of the hoops have been worn since the 1980s when glazing company CR SMITH became the first company to advertise on the Celtic shirt [cleverly sponsoring Rangers shirts at the same time] and for many years Celtic only wore numbers on their shorts for domestic matches, such was their reverence towards the hooped shirt, although from the early 1980s UEFA decreed numbers on the back of the hoops please for European encounters.

Controversy reigned in the early 2000s as the hoops were broken to accommodate a white panel down the sides of the shirt but this cultural faux pas was quickly forgotten when the shirt featured in Celtic's last European final, a 3-2 loss to Jose Mourinho's Porto, in the 2003 UEFA Cup final in Seville.

The socks have changed at times from the 1990s until the present day but for most football purists the white shorts [with numbers] and socks, which accompanied the hoops from the late 1960s and throughout the 1970s, will be the quintessential Celtic kit design.

V necks, pin stripes, Nike's swoosh, Admiral flashes and Adidas stripes have all featured on the Gers blue shirt since the 1960s through until the present day but, for me, the plain blue shirt with three Adidas stripes around the sleeve, as worn by Gazza, will forever be this writer's favourite Ibrox attire.

Rangers ruled Scottish football under first Graeme Souness and then Walter Smith at the helm from the mid 1980s until Celtic stopped them achieving 10 league titles in a row in 1998. This kept both Glasgow giants on a 9 in a row which is, so far, yet to be beaten, but this particular Rangers kit is synonymous with the Paul Gascoigne era and echoes the shirt worn by the likes of Alex Ferguson, Sandy Jardine, John Greig, Colin Stein and Willie Henderson in the 1960s and the team that won the European Cup Winners Cup in 1972.

The Gazza run from inside his own half past a clutch of Aberdeen defenders to score a memorable goal at Ibrox that helped Rangers clinch the title, and a comical moment [although he was sadly booked for it by the school master-like official] when Gazza picked up the referee's dropped red card and comically sent him off, with it are two golden oldies in the top 'Gers strip for me amongst many memorable beauties in the last 50 years. 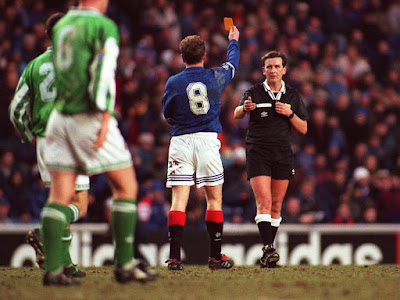 The ultimate marmite kit for Scotland fans with the design worn from 1985 until 1989 with a yellow and blue away kit in the same design.

I always thought it was shirt by Umbro and shorts by Wham, as the design team at the Manchester based Sportswear giants went with a hoop around the shorts which might have looked good in Ibiza, but gave the Scots the look of a team Melchester Rovers might have played in the old Tiger Comic when they appeared at World Cup Mexico '86. 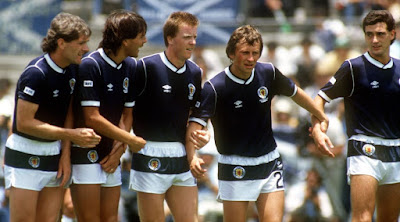 Another kit which is remembered for an offbeat moment as Gordon Strachan puts the Scots ahead against W.Germany in the second group game and then runs behind the goal to celebrate only to realise he's too wee to jump the advertising hoardings and celebrate with the Tartan Army! Scotland failed to get out the first round group as the Germans came back and won 2-1 while a 0-0 with Uruguay and a 1-0 defeat from Denmark in their opening match also did for Scotland in Mexico.

The kit featured in Scotland's last win over England at Hampden, which was in 1985, when Richard Gough headed over Peter Shilton in the Glasgow rain to give Scotland a 1-0 win over the visitors in the Rous Cup at Hampden.

Was the band round the shorts some sort of homage to the sporran? Or were the Umbro design team a victim of 1980s excess when they went into do a deal with the SFA in the days of mobile phones the size of house bricks and Duran Duran ruling the pop charts? I guess we'll never know. 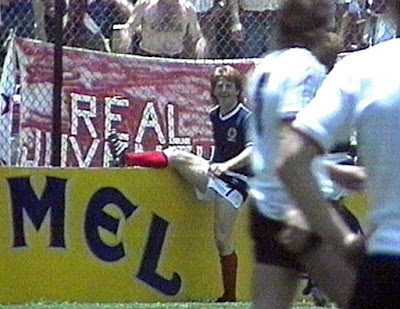 The Lanarkshire side had their Admiral moment, like so many other British clubs of the era. It was in the days of a Fir Park revival, which saw the rise of star striker Willie Pettigrew and the re-emergence of Peter Marinello who was touted as the ''Scottish George Best'' when he was transferred from Hibernian to Arsenal, as Best reached his peak at Man United. The Edinburgh born player, maybe not surprisingly, failed to live up to this ridiculous billing before being offloaded to Portsmouth from Highbury then returning to Scotland with Motherwell in the mid 1970s.

Motherwell established themselves as a real force in the Scottish game again in their amber and claret kit, which was a similar design to the Leeds United lemon away kit of the era. That was Admiral's first eye catching design as they shook up kit manufacturing in the years of flared trousers and prog rock.

In an era when only the Old Firm really registered with football fans south of the border, Willie Pettigrew ended up winning the coveted SHOOT Magazine player of the year award, donning the famous 'well kit for the photo call as he picked up his award in London. 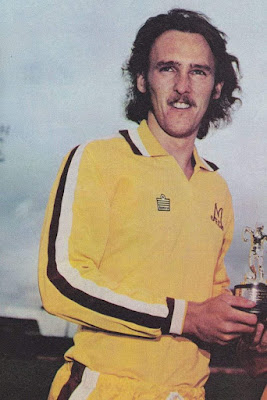 
Our book is available to buy here! https://www.amazon.co.uk/Footballs-Fifty-Most-Important-Moments/dp/178531632X