Peru vs Austria, 1936: The Remarkable Match You've Never Heard About

By The Football History Boys - June 15, 2020
A turbulent decade, the 1930s would see the very fabric of society torn apart by the emergence of ruthless dictatorships and repressive ideologies. It perhaps comes as a shock, therefore, that Germany, under the brutal fascist regime of Nazi leader Adolf Hitler, was chosen to host the 1936 Summer Olympics. Centred in the eastern capital of Berlin, the games proved an opportunity to demonstrate Germany’s rebirth to the watching world.
The 1930s had seen football become increasingly less popular at the Olympics. The development of the World Cup at the start of the decade meant the Olympics were only open to amateur players. Even though there was a lack of recognisable faces, the absence of the game’s professionals would help the final tournament to be incredibly competitive, with the forthcoming Second World War’s key nations all taking part in Berlin. Sport in Nazi Germany had become heavily politicised in order to promote its leader’s ideology on the watching masses. The appearance of Nazi salutes was seen before matches leaves a bitter taste today.
Today, the 1936 Olympic games is synonymous with the achievements of Jesse Owens. The US athlete would win four gold medals at the games, much to the vexation of Adolf Hitler. Hitler's promotion of a 'superior' aryan race had come crashing down, as Owens won the 100m, 200m, 4x100m relay and long jump. A black athlete, his race, so often ridiculed and forced into segregation, had help highlight the futility of  the Nazi promotion of a 'superior race.' Even in the UK, any articles relating to Owen's victories are quick to reference the colour of the sprinter's skin. Traditional histories will explain that his triumph was remarkable due to the repressive racial idelogy of the Nazi's, but the reality is that his four gold medals were on the back of global ambilvalence towards race.
Despite what the Nazi state saw as humiliation at the Olympic Stadium, the football tournament had proven relatively successful for Germany and her international allies. 1934 World Cup winners Italy had raced through to the final, even in light of making a wealth of changes to their squad, with Japan surprising the watching spectators by reaching the quarter-finals. Germany’s neighbours to the south, Austria, had also enjoyed a run of success to make the last eight, where their opponents, perhaps surprisingly, would be South American’s Peru.
Peru was by no means known for its footballing prowess and in their opponents, Austria, found one of the world's most renowned international sides. The match attracted the attention of the British press as Great Britian would potentially face the winners in the semi-finals. Despite fielding amateurs, Austria had seen the sport grow dramatically in the late 1920s and early 1930s. The pioneering efforts of Hugo Meisl had helped to develop Europe's first continential club competition - the Mitropa Cup, and the national team had performed well at the 1934 World Cup, finishing fourth.
Peruvian football had seen some growth in the previous decade as they featured at the Copa America for the first time in 1927, a tournament which they also hosted. There was clearly an apetite for the game in Peru, and their appearance at the 1930 World Cup highlighted their growth. Defeats to hosts Uruguay and Europeans, Romania saw them crash out without a single point, but it gave Peru and their vociferous supporters something to relate too and identify with. More recent histories have led many to describe the 1930s as a 'golden era' for Peruvian football with the talented Alejandro Villanueva, Juan Vildivieso and Lolo Fernandez leading the attack. The lack of professionalism within Peru meant the national could field their strongest XI against the European amateurs. Even with this in mind, Austria were still heavily fancied to progress to the semi-finals.
It came as little surprise then that by half-time, the Europeans, who had resorted to ‘rough play’, were two goals to the good. An Austrian victory would be pivotal to Hitler’s foreign policy, with the 1938 ‘Anschluss’ very much at the forefront of future Nazi plans. Remarkably, with the odds stacked against them, Peru hit back in the second half, scoring through Jorge Alcalde before Alejandro Villanueva equalised in the 81st minute to send the game into extra-time.
Incredible drama was about to unfold in the additional half an hour. The 'disgraceful scenes' had emerged after a violent kickout to the stomach of an Austrian player by one of the Peruvian XI. Heading off for treatment, the South Amercians were incensced when what they believed to be a different player return onto the field. Despite providing evidence of his stomach scars, Peru refused initially to restart. The 'excitable' Peru supporters would then storm onto the field. Some reports numbered the supporters at over a thousand and others a more modest 400. Peruvian supporters, some apparently wielding revolvers, stormed the pitch and attacked the Austrian XI. Shaken by the assault which had reportedly left a player ‘covered in blood’, Austria would concede twice in the final three minutes to lose the game 4-2. 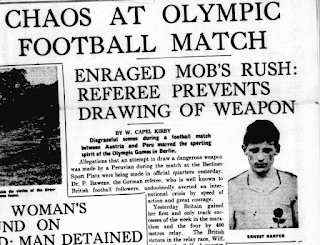 Peru’s national celebrations would be cut short after the game’s dramatic climax as a complaint was lodged and upheld, leading to an arranged rematch. Peru refused to play, arguing that the denial of their legitimate victory had been merely an example of ‘latter day colonialism’ against South American nations. According to The World's Game: A History of Soccer, Peru's President Oscar Benavides was quoted as saying, "National Socialist Germany could not bear to admit that a football team from a South American country, whose race they consider inferior, could carry out a victory over a team of aryan race'.
In Peru, anti-German sentiment was rife. Political leaders, as well as Benavides, would do little but intensify the feeling of robbery throughout the country, eventually withdrawing their entire delegation from the 1936 Olympics. It has been argued that the outrage may well have been exaggerated by those at the top, with national elections around the corner. Locals would stone the German consulate in Lima and a widespread nationalism gripped the coutnry. Peruvian outrage has also done little to quell conspiracies regarding possible Nazi involvement in the farce. Many from Peru have suggested that propaganda minister Joseph Goebbels, fearing an Austrian exit, had prompted the invasion and that the ‘Peruvian supporters’ may not have been native to South America after all.
Austria would go on to win a silver medal at the games in a final suitable to the Nazi regime. Gold medallists Italy would promote their triumph as one of national victory and further proof for Mussolini’s government that theirs was a country to be regarded above all else. Two years after the Olympics, Austria would be annexed into Germany and the wheels of war were to be set in motion once more. The Austrian Football Team would also be controversially merged with the German side and the identity of the nation was quickly expunged in order to prompt a wave of euphoric, flag waving Nazi symbolism.
Peru, on the other hand, would grow after the events of 1936, winning the 1939 Copa America. Forty years later they would see the emergence of a second 'golden age', led by the prolific Teofilo Cubillas and reaching the second group stage at the 1978 World Cup. Controversey was to be just around the corner again as a suspect 6-0 defeat to hosts Argentina saw them miss crash out of the tournament.
We can not know for sure what happened during the football at the 1936 Olympics. For as long as there is interest, conspiracies will remain and the secretive and untrustworthy nature of Nazi Germany leave even the wildest of ideas with some degree of believability. Football is never far way from politics and in the 1930s, the relationship was closer than ever. This moment of football history offers a clear example of its entanglement within the confines of global politics.
Notes:
https://www.theblizzard.co.uk/article/great-walk-off