By The Football History Boys - June 01, 2020
David Collins looks back at his first visit to Ninian Park, former home of Cardiff City Football Club, and describes the pivotal role played in his own story by a true giant of Welsh football.
I have to say my personal memories of John Charles' glittering career are somewhat limited. I wasn't quite around when ‘Pele broke our hearts’ to send Wales out of the 1958 World Cup in Sweden and by the time I had settled into my regular spot on the Ninian Park terraces during the 1970s the great man's best days were behind him.
Despite this, he remains a surprisingly significant figure in my development as a football supporter. As we use these football free times to perhaps look back on our fond memories of times we spent at football grounds in the past, this is a good opportunity to explain why.
During season 1967/68, John Charles had been appointed player-manager of Hereford United. The big man held a two-fold ambition for his new club: to steer the Bulls into the Football League and to win the Welsh Cup. He soon found an opportunity to realise the second of these aims as the two-legged final tie for the 1968 Welsh Cup paired Hereford United with Cardiff City. But fate also had other plans for that evening. 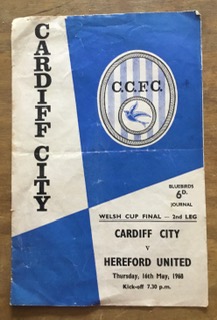 Like many football fans, I was taken to my first game by my father. It is a rite of passage endured by many and my father felt that the match that Thursday night back in May 1968, and my attendance, were in no way an accident. His decision was that I should be "treated" (his word) to an evening at the football. An air of nervous trepidation hung over this frail nine year old I don't mind telling you, for Ninian Park in the late 1960s was no place for the faint hearted.
Now, as I say, a lad's first football match is a Big Event. Cardiff City held a 2-0 lead from the first leg, a fact of which I was doubtless unaware. But I was mesmerised by the sights, sounds and smells of that, my first night at Ninian Park. An army of comrades huddled together beneath the night sky. Enormous floodlights which stretched high into the darkness shining their beams down onto huge cavernous stands. A strange media centre known as “Radio Ninian” occupied the far corner. I think this basic tannoy system under a corrugated roof fancied itself as a pirate station washed up on the shores of Lake Ninian, announcing half time scores and “Golden Goal” competition results.
A special Boys Enclosure at the very front seemed only inches from the goal and the pitch itself. TV cameras sat on a gantry above our heads. Wooden benches filled the giant Canton Stand behind one goal. Behind the other, the dark and imposing Grange End. Back in the days when football grounds featured boisterous home “ends” full of noisy, partisan fans, Cardiff’s boys rubbed shoulders with the best of Britain. Liverpool had its Kop, Man United the Stretford End. We had The Grange End. Like a mighty cave behind the goal who knew what beasts lay within?
A horde of faceless souls occupied these vast structures. Battle-hardened pensioners in weather-beaten flat caps, shaven-headed monsters with giant boots, braces and silk scarves tied to their wrists. In the darkness of the stands a thousand cigarettes flickered like fireflies on a hot, tropical evening.
But this was Cardiff, not Calcutta. And that night, names such as John Toshack and Don Murray became part of my world for the first time; lifetime friends I might never actually meet. I gazed in wonder at their bright blue shirts shimmering beneath the silver light shining down from on high. 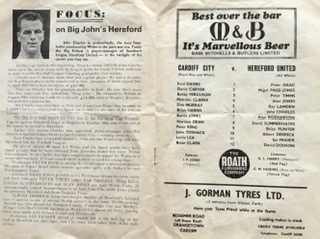 Yet, for my father, there was only one man out there on the pitch. ‘Finest player you ever saw!’ ‘Greatest Welsh player of all time!’ ‘Watch the Game!’ These were the lines I would remember from that very first night. My father's pride in sharing the same stadium as his hero, John Charles, resonates still as my overwhelming memory of that evening. Don't give me anything about my Dad being 50 yards away on the terraces either. As far as he was concerned, he was out there on the same pitch as the Gentle Giant. And who was I tell him otherwise?
Such things stay in your mind don't they? They create an impression and shape one's obsessions. I was hooked. A lifetime's wasted Saturdays started here. Thanks a bunch Dad.
In the mid-1970s I was fortunate to actually meet the great John Charles, at a charity match held deep in one of Cardiff’s leafy suburbs. Eager for an autograph, I pressed my muddy crumpled programme under his sweaty brow as he was leaving the field of play. ‘Not now sonny,’ he breathlessly replied.
Did you spot that? John Charles called me “Sonny.” My Dad was over the moon. Years later, these golden memories came flooding back. It was 2002 and the Gentle Giant as he was known was acknowledging the cheers of a packed Millennium Stadium prior to Wales’ famous victory over Italy. (Charles had played for Juventus and was something of a hero there as in Wales.)
My father is no longer with us, yet, inevitably, I could feel him alongside me, bristling with the same admiration and awe as this time I stood alone among the massed ranks to applaud the great man. Unbeknown to him, I was also acknowledging his influence on my life as a football fan. That’s where it all started.
Cardiff City won the 1968 Welsh Cup Final by 4 goals to 1. I know this, because I have looked it up. But I also know that my father was in awe of John Charles, because I was there. Sometimes, sometimes, you just have to be there.
David Collins is the author of several football books including ‘Born under a Grange End star.
Kindly written for @TFHBs by David Collins (@DavidCollins29a) with the help of Tim Hartley (@TimHHartley)
Our book is available to buy here! https://www.amazon.co.uk/Footballs-Fifty-Most-Important-Moments/dp/178531632X