By Gareth Thomas August 31, 2022
There are plenty of reasons why football has grown to become the world's most popular sport. The game's simplicity means it can be played by almost anyone, anywhere. Its incredible fanbases have helped to create unbeatable atmospheres, but it is arguably in the sport's unpredictability that truly sets it aside. Gareth and I have compiled a list of 10 of the Men's World Cup's greatest shocks. Covering almost 100 years of football history, the following upsets can tell us more than just what happened over the course of 90 minutes. 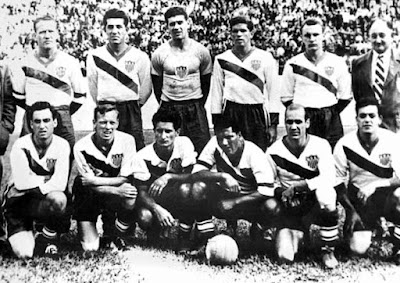 USA 1-0 England - 1950
This moment, the Miracle on Grass as it has been called, is a TFHB favourite. The moment the English, post-WW2, after missing the first three editions of the tournament, finally decided to join the FIFA World Cup. In 1930, 1934 and 1938, the English (and other home nations) decided that a world football competition was below them, the founders and perfectors of the beautiful game. The danger of letting that crown slip left England, Wales, Scotland and the Irish refusing to take part. In 1950 the English would agree to join and in Brazil, England would lose 1-0 to the United States of America in a result that shocked the world.
England's isolationist policy from international football was further justified in their minds in 1934 when they beat World Cup 1934 winners Italy in the Battle of Highbury. England beat the world champions and for them, this showed who really was the best. However, by 1950, after a world war, views were beginning to change and it was agreed that the British Home Champions would join FIFA competition for its return in Brazil.
Alongside England, the US and the hosts were teams from South America, Asia and Europe. The competition was originally scheduled for 16 teams, however four of the teams withdrew before a ball was kicked - India, Turkey, France and Scotland. The Scottish National Team had stated before the tournament that only victory in the British Home Championships would be enough to see them qualify, despite FIFA allowing two British representatives. The decision was made by SFA chairman George Graham much to the dislike of the Scottish team members like captain George Young, but the SFA saw the righful place at the World Cup as only for the victors.
In the build up to the World Cup, England had showed fine form, with victories over Italy and Portugal, 4-0 and 10-0 respectively. This build up sharply contrasted to USA's seven straight losses and so when the two met in Belo Horizonte on 29 June 1950, expectations were set for the English to romp to a comfortable victory.
In their World Cup opener England had beaten Chile 2-0, courtesy of talisman Stan Mortensen, whilst the USA had been beaten 3-1 by the Spanish. It meant that a win for England would all but seal their progression and send the USA packing back to North America. However, on that famous day a miracle would occur... the Miracle on Grass.
USA's squad was filled with part-time players, one being Haitian-born striker Joe Gaetjens who led the line for his adopted nation. He would finish his international career with just three caps and a single goal but this one goal was to become one of the most famous in World Cup history.
England, as expected, dominated the first half with American goalkeeper Frank Borghi facing six shots in just twelve minutes - two of which had hit the woodwork. However, in the 38th minute, Walter Bahr launched a rare shot goalwards for the USA. Bahr's shot flew in the direction of Gaetjens who dived and got his head to the ball, the contact enough to take it past Wolves goalkeeper Bert Williams - 1-0 to the underdogs!
Into the second half and the English pushed for an equaliser, their talented front line of Mortensen, Tom Finney and Jimmy Mullen peppering the US goal. Borghi though, had a day to remember, making a number of 'miraculous' [1] saves to keep his clean sheet and secure his country a famous victory. Alf Ramsey (player that day and future England manager) claimed afterwards that Gaetjens didn't even mean his game-winning header, stating he 'ducked to avoid the ball' [2]. Whether this was true or was just Ramsey's sour grapes, the fact is clear; England were on the receiving end of one of the World Cup's greatest shocks.
The result obviously recieved sizable reaction in the British press in the following days, a paper reportedly misprinting the scoreline as 10-1 to England, believing the '0-1' score being sent over from Brazil must be wrong. The Birmingham Daily Gazette labelled it 'a black day for England', with the Nottingham Evening Post calling it an 'unbelievable defeat', to the '500/1 outsiders' (Newcastle Journal).
England's humiliation on the international stage was compounded on 2 July 1950, as another 1-0 loss, this time against Spain, sent the English back across the Atlantic Ocean in shame. The USA meanwhile, would lose their next fixture to also see elimination, the highs of Belo Horizonte not replicated in a 5-2 defeat to Chile. This was to be their last World Cup until 1990, meaning for 40 years, Haitian-born Gaetjens held the USA's greatest ever footballing moment in his header. 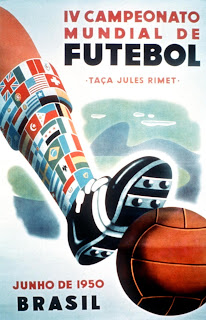 Notes:
This blog contains an extract from our second book - The History of Football in 90 Minutes (Plus Extra-Time) - you can purchase it here!