By Gareth Thomas August 28, 2022
The greatest goals in football are often judged on the artistry of a single player. Whether it is a situation of a ball that was dribbled from the halfway line, a curling free-kick, a bullet header or a thunderous strike, it always glorifies the individual. Then again, sometimes football needs a reminder of it’s humble origin, teamwork. Malaysian based football writer @SivanJohn_, recalls his experience of Argentina's 2006 beauty. 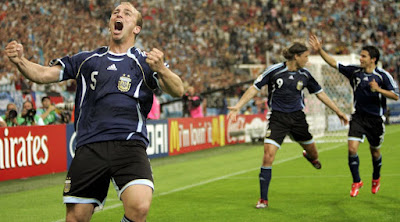 On one afternoon in Gelsenkirchen during the 2006 FIFA World Cup, Argentina were set to play Serbia & Montenegro (S&M) in their second group game. Surprisingly S&M were a team that arrived in Germany with the most stubborn defence in the European qualifiers, so little did fans expect a hammering. S&M had topped their qualification group, which also contained Spain, by conceeding just one goal in eight matches. However, within the space of 90 minutes, that defence was about to be shredded to smithereens.
Argentina, managed by José Pékerman, put up one of the most unblemished performances seen on a football pitch in recent World Cup memory. To make this whole situation even paradoxical, the match kicked off with both Lionel Messi and Carlos Tevez were on the bench. I can remember the commentator saying “how scary is that?”, and he was right, as Argentina began to take apart their European opponents.
Argentina came into the contest needing to be more convincing if they were to mount a challenge at winning the tournament. They had only managed to scrape through 2-1 against Ivory Coast in matchday one. On 16 June 2006 though, already 1–0 up thanks to Maxi Rodríguez's opener, Argentina were on the verge of putting on a breathtaking show. Their second goal consisted of the most alluring 24-pass move ever seen at the World Cup. 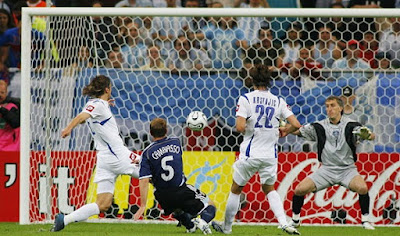 Again, it started with Maxi Rodríguez. He came lurking right behind Metaja Kežman to take the ball away from S&M’s possession and from then on, the entire pitch was only filled with moment of grace and deftness that requires ones patience to truly embrace.
With Juan Román Riquelme being the conductor of this orchestra, you could actually feel your entire body going through a sense awe with every pass made. It would've been a shame if it all ended without its moment of climax.
In came Inter Milan midfielder Esteban Cambiasso, who had initially replaced the injured Lucho González in the 17th minute. It is worth noting that Cambiasso was actually dropped from the starting line up, as Pékerman felt with him around, the team was too defensive.
After receiving the ball from Javier Saviola, he provided a subtle pass to Hernán Crespo. On any given day, Crespo being the predator he was, would've attempted the kill. But on this day, he felt that this show deserved to have its encore.
He decided to back-heel the ball to Cambiasso, who then provided the most spellbinding finale by the sending the ball straight to the roof of the net. What followed was an explosion of jollification, not only seen by those inside the stadium, but also the millions of people around the world who were glued to their television sets.
Football is very much like music. It arises out of the intellect and creativity of an individual or group but equally important, a dedicated producer to harness that talent. Thus in the context of popular culture, Diego Maradona’s goal of the century against England in 1986 would be very much on par with Michael Jackson’s greatest selling album, Thriller.
So where would Cambiasso’s goal stand then in the world of pop then? I can’t think of better record than 'Hysteria' by Def Leppard. After all, the album’s success wasn't just down to the elements brought by each members of the band, but also the guidance of producer Mutt Lange. This was only made possible thanks to the years of hard work between the band and Lange.
In this case of Cambiasso's goal, the ideal person to play the Lange role would be non other than Pékerman himself. Before he took over the senior team, he was the director of youth football within the Argentine Football Association. Under his orchestration, the Under-20s side went on to win three World Youth titles between 1995 to 2001. The likes of Riquelme, Cambiasso, Rodriguez, Saviola and captain Juan Pablo Sorín were all part of those winning sides.
Whilst every single pass and move, right from Rodriguez’s pilfer to Cambiasso’s shot, may have only lasted for 54 seconds. The reality is, that this goal is the accumulative of work that goes back for almost a decade. It is a direct result from the chemistry and relationship that Pékerman has build with his players since their teen years.
Equally important is the knock-on effect this goal had on football in the years to come. The moments in those 54 seconds was also the precursor of a revolution known as 'tiki-taka', that would take the world by storm when perfected by Spain national side between 2008-2012. It has also been customary for every team playing this way to want to score what is described as the “perfect goal”.
Argentina went to score four more goals in this game, securing the biggest win of this tournament (6-0). The sixth goal coming from Messi, his first ever at the World Cup. It immediately cemented their status as the hot favorites to lift the trophy. Unfortunately, they were undone by Germany on penalties in the quarter-final.
Pékerman may be blame for his dubious substitutions which practically cost their chance against the host nation. But this goal (watch it below) will however secure legacy on the amazing that job he has done for Argentine football.
This piece was kindly written for @TFHBs by Sivan John - You can follow him on Twitter: @SivanJohn_
©The Football History Boys, 2022
(All pictures borrowed and NOT owned in any form by TFHB)