By Gareth Thomas January 11, 2022
Footballers who also fought at war is always an intriguing topic, one @RichEvansWriter is passionate about. Take a look at the career of a man who has an experience no other footballer can boast:
The hero who helped to win the 1954 World Cup for West Germany might easily not have made it home from the Eastern Front.

In fact, it is a list that features only one name: Fritz Walter.
His club career with FC Kaiserslautern spanned 364 appearances between 1937 and 1959 and saw him score an astonishing 357 goals as an inside forward. He also succeeded at the highest level when, in 1954, he captained his national team to victory against overwhelming favourites Hungary.
‘The Miracle of Bern’ was a 3-2 win that ended the Magical Magyars’ 32 game undefeated streak, arguably paving the way for West German success in the tournament in 1974 and victory for a unified Germany in 2014. It was made all the more remarkable by the fact that Die Mannschaft had been trounced 8-3 by Ferenc Puskás, Nandor Hidegkuti et al in the group stages a mere fortnight previously.

There must have been footballing magic emanating from the Palantinate Forest: Fritz’s brother Ottmar was another striker at Kaiserslautern; he had an even more impressive scoring record than his sibling (307 goals in 275 games) and also played in the World Cup winning West German team.
While cross-generational comparisons can admittedly be misleading, in terms of goal-scoring ratios, the brothers Walter (0.92 for Fritz and 1.04 for Ottmar) outstrip Messrs Messi (0.80) and Ronaldo (0.75) by some margin.

But it could all have been so different…

As with almost all German males of his generation, Fritz Walter was conscripted by the Nazi war machine. Having already made his international debut in 1940, he played various wartime friendlies. Indeed, national team manager Sepp Herberger – owing to party privileges – was often able to recall players from the front line for such fixtures. The match with the most significance to the Fritz Walter story was probably the 5-3 German victory over Hungary in 1942 which saw him score twice.

By this stage of the war, and with the entry of the USA, the tide against the Blitzkrieg was gradually turning; while Goebbels’ propaganda claimed otherwise, air raids and food shortages were becoming undeniable features of everyday German life. Come 1943, all focus had shifted to supplying the front, which meant footballers could rarely return to participate in fixtures as they had done before. This directly impacted upon Walter who had been transferred to a parachute regiment stationed within the Soviet Union.
By this point, Stalingrad had proved a watershed and the Red Army – with its seemingly limitless manpower – was beginning to push inexorably west. Desperate in the face of the Soviet advance, Walter’s commanding officer - Major Graf - ordered the destruction of his unit’s planes. He also advised his men to head towards the more benevolent Allied forces in order to surrender.

So it was that Walter found himself interned in a US camp. However, a few weeks later, a prisoner transfer meant that he – along with 40,000 fellow POWs – was relocated to a Ukrainian reception centre overseen by Soviet forces. Their destiny was to be the Siberian gulags; minus 40-degree conditions and insufficient clothing for the conditions awaited them. Estimates vary considerably, but it is reckoned that between 12 and 20 million prisoners perished under such circumstances during Stalin’s rule. At the very best, those in the camps rarely survived more than five years of incarceration.
So, what happened to Fritz Walter?

The story is, that he found himself embroiled in an impromptu game involving some of the guards. Doubtless his ball skills would have drawn attention to him and it was as a result of this that a Hungarian guard, who had seen him play in 1942, recognised him. Owing to this twist of fate, Walter’s name was mysteriously removed from the list of prisoners bound for Siberia.
It is, of course, impossible to ascertain how much of this is myth and how much is reality, but it is alleged that the guard was able to succeed in his endeavours by claiming that the footballer was actually Austrian rather than German.

After the war, competitive football in Germany resumed in 1947 and the demobilised soldier returned to Kaiserslautern. Though the national team was prohibited from participating in the 1950 World Cup, Walter did not escape international interest - Atlético Madrid reportedly offered an enormous fee for his services which he duly declined. It should be noted that German football in this pre-Bundesliga era remained amateur, so such a move would likely have disqualified him from future international selection.

Fast forward, then, to 1954 and Switzerland. The close proximity of the tournament played into Walter’s hands – one legacy of the War, borne of his time as a paratrooper, was an enduring aversion to flying. Another unwelcome result of his time in uniform was malaria; recurrent bouts meant that he was susceptible to humid conditions. Had the tournament been held further afield in warmer climes, then atmospherics might well have proved a real hurdle.
Finally, there was the weather on the day: rain-soaked conditions were affectionately termed ‘Fritz Walter’s Weather,’ owing to the elevated performances that they seemed to produce from the inside forward. His employment of longer studs meant that he was better adapted to the conditions than most and, as the weather in Bern worsened and the pitch deteriorated, the Hungarians’ possession-based passing game was much disrupted.
Looking back, the ending of the Magical Magyars’ dominance seems to have coincided with a sense that post-war Germany was beginning to rise from the ashes of the preceding decade. Arguably, Walter therefore had a cultural impact that transcended the world of football and helped to imbue a sense of confidence and pride in an emergent nation.
His place, both in the pantheon of footballing greats and also as a talismanic cultural figure, was clearly evidenced by the feelings of grief that accompanied his passing in 2002. The FC Kaiserslautern stadium still bears his name and, even now, whispered conversations take place over who was the greatest – Walter or Beckenbauer.

So there we have it. A legend – undeniably. As with any story rooted in wartime, though, it is important to reflect a little more broadly. Though we salute the footballing exploits of Fritz Walter and are thankful for what his unlikely escape allowed him to contribute to the sporting world, it is important to step back and remember the wider context.
He may well not have been among the 40,000 that went to Siberia, but it is almost certain that another prisoner went in his place. The law of averages would suggest that, whoever it was, they and the remainder of their transport would likely have perished. While we may celebrate Walter’s good fortune, we should nonetheless be careful not to forget the human tragedy that formed its backdrop. 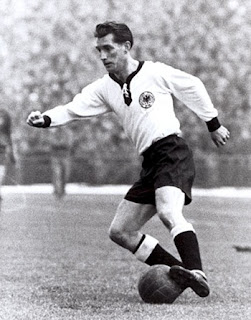 By Rich Evans, written for @TFHB.
©The Football History Boys, 2022
(All pictures borrowed and not owned in any form by TFHB)