Cowdenbeath: On the brink of unwanted history

By Gareth Thomas - January 09, 2022
They've been a football pilgrimage for fans outside Scotland for years and a mascot for the eternal underdogs of the game, but we are now close to losing one of the most familiar names from lower league football in the UK unless they can make a great escape for a third time. @AlexHTheMAX tracks some of the historic highs and lows of Cowdenbeath FC. 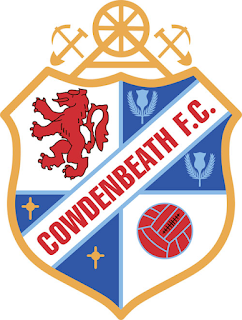 Sitting ten points adrift at the bottom of Scottish League Two at the start of 2022, Cowdenbeath FC are facing their third relegation play-off since the Scottish Pyramid system was established in 2014. They are once again looking down the barrel of a two-legged tie for SPFL survival against the winners of the Lowland or Highland League.

If Cowdenbeath were to be relegated they'd take their place in the Lowland League due to their geographical status around 25 miles from Edinburgh.

The Fife club have boasted support from a soap star and a pop star in their 141 year history, and were the first team from outside the Scottish top flight to competitively beat Rangers. However, the Central Park club, who are akin to a football brigadoon, enjoying visits from fans UK wide who want to see how "that team with the funny name" actually exist, are now on a precarious downward slope.
Formed largely by the Pollock family in the 1870s, after they had settled on the east coast following a move from Ayrshire, Cowdenbeath FC gained Scottish League status in 1905 and have been a fixture in the competition ever since.

However, a rollercoaster eight years since 2014 that has seen two promotions on the road to the Scottish Championship, then consecutive relegations, plus two play-offs to actually stay in League Two, has taken an emotional toll on supporters and a financial one on the self styled "Blue Brazil."
The tragi-comedic club nickname, which developed in the 1980s, has its roots in dry Fife humour rather than delusions of grandeur. Any Cowden fan will tell you that life is hardly a beach when you decide to don a blue and white scarf and sign up to the cause.

Elton John said Cowdenbeath were his favourite Scottish team in a radio interview after a concert in Edinburgh at the start of his reign as Watford Chairman in the 1970s.

In the 1960s one of the first UK TV soap stars, Coronation Street's Peter Adamson AKA Weatherfield character Len Fairclough, came to watch Cowden after being intrigued by the name on the pools coupon.

Adamson missed the game he was due to attend at Central Park due to his love of a drink or ten, then left in profit after opening a local furniture store in the town thanks to a proprietor with an eye for early British celeb culture.

The 1949 League Cup Quarter Final tie with Rangers represented a high watermark for Cowden as they inflicted a 3-2 defeat on the Gers at Ibrox in the First Leg to make history as the first domestic team from outside the Scottish top flight to competitively beat the Glasgow giants.

The Second Leg was pre-Central Park floodlights and played on a Tuesday afternoon, pulling in a 25,000 plus crowd, and once again Rangers struggled, with seconds left it was 1-1 on the day and 4-3 on aggregate to Cowdenbeath, with giantkilling history about to be written.
Rutherford then scored an agonising aggregate equaliser for the visitors, before Sammy Cox made it 3-1 in extra time to give Rangers an overall 5-4 victory at the end. Rangers wouldn't go as close to being humbled by lowly opposition before their infamous 1-0 loss at Berwick in the early rounds of the 1967 Scottish Cup.
In recent times, Cowdenbeath have survived against underdogs East Kilbride (Lowland League) and Cove Rangers (Highland League) to preserve their Scottish League status, but Cove gained SPFL status at the second attempt, sending Berwick Rangers out of League Two in 2019. The Aberdeenshire side now sit on the brink of Scottish Championship football.

Cowdenbeath are now in danger of joining Brechin City, Berwick and East Stirlingshire (all demoted since 2015) as former well known SPFL sides now plying their trade in non league football since the pyramid was established north of the border.

A 37th manager in 45 years for the Blue Brazil, former Rangers player and Notts County assistant manager Maurice Ross, saw Gary Bollan replaced as the man in charge of team affairs recently, as Cowden attempt to stop the rot. However, with ten points separating the Fifers from Elgin City at the bottom of League Two at time of writing, another "Great Escape" attempt is definitely a possibility at the end of the current season unless there is a sudden reversal of fortune.
Manchester United and Rangers favourite Jimmy Nicholl (two spells in the 21st Century), Lisbon Lion and Celtic legend John Clark, King of Hibs Pat Stanton (both in the 1980s), former Scotland internationals John Brownlie (1990s) and Peter Cormack (2000s, for a controversial few days) have been amongst the Scottish football greats who have graced the home dressing room as managers in the past four decades at Cowdenbeath. Now it's all about keeping the club, and indeed the town, on the map as these days the local football team and the sport of Stock Car Racing (also a feature of Central Park since the 1960s) is largely what the former mining community is known for.

Fans from Carlisle to Cardiff, Leeds to London and even beyond these shores will continue to venture north to view this glorious oddity of British football that is Cowdenbeath FC, and maybe more so this season, with so very much at stake for "that team with the funny name."
By Alex Horsburgh, written for @TFHB.
©The Football History Boys, 2022
(All pictures borrowed and not owned in any form by TFHB)
Scottish football