By Gareth Thomas January 24, 2022
Footballers who also fought at war is always an intriguing topic, one @RichEvansWriter is passionate about. Take a look at the career of Donald Simpson Bell, who holds the dual distinction of being the first professional footballer to enlist for the Great War, and the only one to be awarded the Victoria Cross. 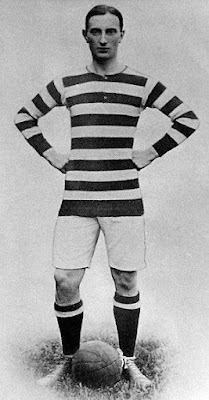 US Fleet Admiral William Frederick Halsey, Jr. famously said; ‘There are no great men, there are only great challenges, which ordinary men like you and me are forced by circumstances to meet.’ Such an assertion could easily be applied to so many of the servicemen and women of the First and Second World Wars who, plucked from their everyday existences, found themselves doing things they might never otherwise have dreamed of.
It might also be considered in the case of Donald Simpson Bell, whose bravery under fire in 1916 earned him the highest possible military commendation. Bell was not simply a soldier who switched his civilian attire for khaki, but was an accomplished sportsman whose footballing prowess earned him professional terms with Bradford Park Avenue (now Bradford) in 1912.

Born in 1890, Bell studied at Westminster College before returning to his native Harrogate to become a teacher at what is now Starbeck Primary School. As a student, he played amateur football for both Crystal Palace and, later, Newcastle United. A utility player, adept in both defensive and midfield positions, Bell turned professional in order to supplement his teaching income.
His amateur background should not cloud judgement of his playing ability, though; the Bradford with whom he turned professional were a big club, having finished fifth in the First Division in the 1910-11 season and having also defeated Newcastle United to win the FA Cup final replay in the same year. He made five first team appearances in 1913, following his debut against Wolverhampton Wanderers, and was arguably on the cusp of a significant professional career when War was declared.

Bell felt very strongly that he should enlist and so, in 1914, he wrote to the directors at Bradford Park, formally requesting that he be released from his contract, stating; ‘I have given the subject very serious consideration and have now come to the conclusion I am duty-bound to join the ranks.’ 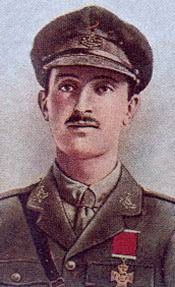 Whether or not Bell’s actions were driven by his own patriotic fervour or by the wider atmosphere of jingoism that proliferated after Kitchener’s call to arms is unclear, but, either way, he was inducted as a Private into the West Yorkshire Regiment (The Green Howards) less than three months after War was declared.

Once in the army, Bell’s intelligence and leadership qualities became quickly apparent and he was swiftly commissioned as a second lieutenant. By late 1915, though, the initial optimism that had accompanied the War’s declaration had evaporated (with the popular idea that it would ‘be over by Christmas [1914]’ having faded into distant memory). Heavy casualties suffered by the regular British army and her allies meant that British volunteer regiments were to be called into an offensive designed to supposedly hasten victory.

Of course, the first day of the Battle of the Somme in 1916, has passed into both folklore and the collective subconscious. It is difficult to compute the sheer scale of casualties. Sebastian Faulks powerfully encapsulates the sentiments surrounding it in Birdsong (1993) when the Padre – Horrocks – hurls his silver crucifix away in disgust after decrying the horrendous loss of life as being ‘half of England.’ Though this is a moving snapshot, carefully researched and with immense impact, it remains a work of fiction.

Bell was actually there...

On the opening day of the battle, the Green Howards were placed in reserve near Albert - the town lies directly across the Somme battlefields from Bapaume. Albert was notable for its shell-damaged basilica that featured a precariously leaning golden statue.
By the 5th of July, the Howards were moved to the front to attack a section of the German line known as Horseshoe Trench. Coming under heavy machine gun fire, Bell traversed a communication trench with a young NCO and, using small arms and mills bombs, destroyed the post. In doing so, he saved the lives of many of his comrades and allowed the mission’s objective to be secured. This gallant act led to him being recommended for the Victoria Cross but, in spite of his heroism, he remained extremely humble. Indeed, in a letter home to his mother, he described the deed as simply being ‘the biggest fluke’ and claimed he ‘did nothing… I chucked the bomb and it did the trick.’
Five days after his exploits at Horseshoe Trench, Bell was killed in an attack on a German position; across open ground, he came under machine gun fire and perished immediately. The exact location was Contalmaison – a village almost equidistant to both Albert and Bapaume – his men renamed the position Bell’s Redoubt in this honour. As with most casualties of the Great War, he was buried where he fell, his resting place marked with a simple wooden cross.

Following the Armistice, the Imperial Wars Graves Commission (as it was then known) set about re-interring victims that had been hastily buried on battlefields and moving their remains to official cemeteries. This was the case with Bell – his tombstone is at the Gordon Dump Cemetery, located in the valley below Ovillers-La Boiselle. The memory his sacrifice continues to hold within sport is clear; in 2010, the Professional Footballers’ Association purchased Bell’s medals and his Victoria Cross is now on loan to the National Football Museum, Manchester.

Though it is difficult to quantify heroism, Bell’s peers did it for him. That they recognised an act of selflessness that went far beyond that which might be expected under any conditions, is testament to his bravery and strength of leadership. The fact he seemed to shrug it off as being nothing out of the ordinary is evidence of the man’s modesty and perhaps his sense of duty and purpose. Halsey’s axiom speaks of ordinary people rising to meet extraordinary challenges. His argument that ‘there are no great men,’ though, does not seem so convincing in the case of Donald Simpson Bell.
By Rich Evans, written for @TFHB.
©The Football History Boys, 2022
(All pictures borrowed and not owned in any form by TFHB)