Real Madrid and all that | @DavidCollins29a

By Gareth Thomas January 19, 2021
South Wales based football writer David Collins reviews a unique new title, 'Real Madrid and all that', which chronicles a defining season in one football club’s history. If you share his obsession with all things 1970s, it’s well worth checking out! 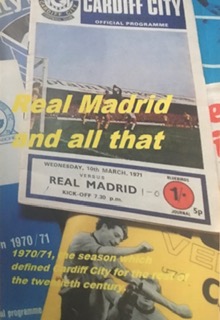 I have never been much for competitions or games of chance. I don’t play the Lottery, don’t bet on the horses, and can’t really get too animated over fantasy football. I’d rather keep my money in my pocket I guess.
Though I do enjoy a quiz. Mastermind, University Challenge, Quiz Night up the pub. Yeah, "I likes a good quiz I do". I particularly enjoy the regular testing of my soccer knowledge offered by the Cardiff City Supporters Trust magazine. It’s a testing exercise with a nice incentive of £50 prize money.
I have yet to win the top prize, but have come close once or twice. Usually this brings little more than a metaphoric pat-on-the back though recently I was delighted to pick up a “runners up” prize courtesy of Trust stalwart Paul Evans.
Paul is well known to Cardiff City fans. Blogger, historian, all round almanac, he can be relied upon to produce definitive accounts of the adventures of Cardiff City. His latest work is an account of Cardiff City’s epic 1970/71 season. An unexpected Christmas present for me. - It turned out to be an absorbing read!
Sure, the book is primarily aimed at Cardiff City fans, but students of the wider game would also enjoy it I’m sure. For, deep within the local references, Bluebirds line ups and transfer gossip, we find a host of tiny anecdotes which describe a very different football landscape from the modern era. We share the author’s tension as he tries to keep up with events at away games in a pre-digital age; no wall-to-wall satellite TV coverage or internet keyboard warriors to keep us posted back then were there?
Of course, the true justification for the book is to chronicle the adventures of a momentous season in the life of Paul’s beloved Cardiff City. He describes in eye watering detail the enormous events surrounding the Bluebirds’ famous victory over Real Madrid, the fall-out from the controversial sale of John Toshack to Liverpool and the club’s eventual fall from grace which saw them plummet from the edge of glory to the depths of the Football League over the next 30 years. Men in grey suits still sigh at such memories. 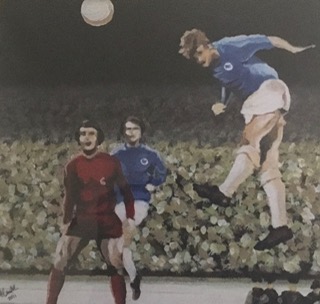 Paul describes how a club can slide down this slippery slope with apparent ease. I saw echoes of other fallen giants in his pages: the demise of Sunderland, Pompey and Coventry. Leeds, Manchester City and even a post '68 Manchester United. You will recognise your club somewhere in these events I promise you.
Paul acknowledges the introduction of colour TV, the early days of decimalisation and non-PC social references which characterised the decade. 'Call My Bluff' and 'The High Chaparal' were TV highlights in the 3-channel Chez Evans.
It is his eye for the intricate football details which most appeal though. Muddy pitches, Football League Review and “paying cash at the turnstiles”, Paul introduces us to a young Trevor Francis, Malcom Macdonald and Peter Shilton plus established stars such as Denis Law and of course, George Best. We also meet lesser names, stars of the old Second Division such as Derek Possee of Millwall, John Galley of Bristol City and Sheffield United’s Welsh ace Gil Reece. Don Rogers, who looked like a South London car salesman but played like a Brazilian. Paul calls Leicester “the Foxes” and refers to a Welsh Cup tie against Chester City at “Sealand Road”. Paul even uses a phrase I had forgotten about at one point, describing how a shot from Pompey’s classy "Under-23 international" Norman Piper is cleared off the line by Gary Bell. Under 23? Why was 23 considered such a milestone back then? Whole international sides were assembled to represent the best of their age group in this unusual category.
Paul’s odyssey is richly decorated with photographs of the iconic kits of the era, plain shirts with a simple badge. Full back Dave Carver is shown defending in his No.2 shirt, not pushing forward wearing 66. Teams only changed kits to avoid a direct colour clash, though Paul’s later obsession with Cardiff’s mauve & yellow ensemble still defeats me. Hair was groomed with a comb back then, while we also see John Toshack’s wife sporting ultra 70s white knee length boots in one shot as Bill Shankly greets the new Kop hero at Lime Street Station. She reminds me of the lead singer from Middle of the Road.
An encyclopaedia of newspaper articles, quotes and match programmes give the work a contemporaneous edge, though, engagingly, the author views his adolescence through the eyes of the 60 year old that he has now become. There is also a fascinating contemplation of the FA youth cup team of those days and its impact, or not, on the future fortunes of the club.
As a definitive record of a season in the sun, I found the title a reliable and informative read. I must admit to “fast forwarding” through the odd match report here and there, pausing though to share Paul’s memories of the Golden Goal Ticket, rivalries with Bristol City (not so much Swansea) and debates about whether football would ever survive merely ”by television alone”. 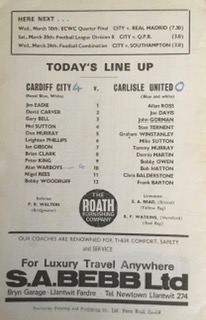 I felt myself searching for an index a few times as I sought to revisit Paul’s references to Bob Stokoe, John Charles or Bootham Crescent but given the wealth of references within the overall book, an index would have been one heck of an ask. Less easy to understand though, were the comparatively few references to football hooliganism, given the way in which the antics of some fans began to define the football landscape and this club in particular during the eras of bovver boots and tank tops. Maybe Paul thought that that had all been done to death in other publications or maybe, it all just passed him by during his early teens.
This book is a worthwhile addition to the bookshelf of any Cardiff City fan. If you are 60 plus, you will consult it many times, as I have. Even if you support Hull City, Sheffield United, Swindon Town or most other teams who lit up the old Second Division though, I reckon it’s still worth a read.
And if you can find some old repeats of The Big Match for company, you won’t go far wrong.
You can grab the book here via Amazon.
This piece was kindly written and given to @TFHBs by David Collins - you can follow him on Twitter: @DavidCollins29a
©The Football History Boys, 2021