Wow, there’s a thought eh?
Many contributors have plumped for agonising England defeats; Italia 90, Mexico 70 – both to the West Germans of course, despite that “lucky” red kit.

I am a Welshman. I could thus make a reasonable stab to amend the score of many international games I have attended over the last 50 years!

If only Bodin’s penalty hadn’t hit the bar? Should Yorath have tucked away that penalty against Yugoslavia in 1976. If John Charles hadn’t been injured in 1958. If only, if only??

But I’m going for real heartache. Full on, penalty based controversy. Welsh football in a nutshell.

Football-watching was a very different pastime in the mid 70s from the world we know today. Enormous banks of terracing stood behind the goals at the big stadia. Scarves tied to wrists. Fences kept the crowd at bay. An unruly world of football hooligans. Not the Burberry clad “casuals” of later years though. This was a barbarian era of long hair and flairs. Fights happened where you stood, not at some prearranged venue orchestrated by mobile phones. You could smoke inside the stadium. Nobody wore football tops to games.

Wales had faced Yugoslavia at Ninian Park, Cardiff, in May 1976. The quarter finals of the European Championship. Yes, that’s right: Wales in the last eight. It ended, of course, in a cocktail of mayhem and missed chances that was to characterise Welsh football for many years. Read Nick Burnell’s excellent account of the whole sorry tale in his highly readable “Trailing Clouds of Glory.”

As a result of the crowd scenes and disarray in that Summer of 76, Wales were obliged to play their next game some 200 miles away. In other words, Wrexham.

We were due to face Scotland though. World Cup qualifier. They would bring their tartan hoards. The Welsh FA’s eyes lit up. The cash tills were poised. The game was staged…..at Anfield. 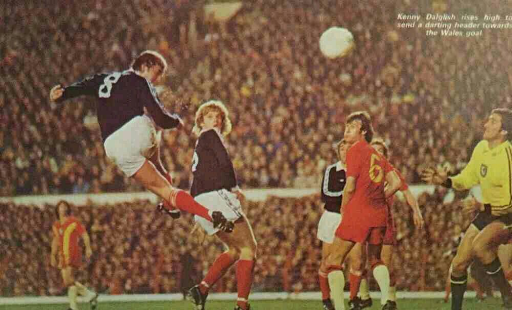 Fast forward then, to 12 October 1977. I was 18. My ticket said Spion Kop. Football folklore anticipated a swaying tide of “home” fans. We made a banner. People did this then. It said “Cymru Am Byth” in red, hand-painted letters, to be held aloft on broom handles, in keeping with the fashion of the day. It would take its place amongst a plethora of Welsh dragon flags as the massed ranks of Wales fans occupied the most famous section of terracing in the country. A swaying sea of Welsh passion.

Our coach load of Cardiff City fans snaked its way into Liverpool. I wore a red hoodie. My mate Gary clad in his beloved Wrangler jacket, decorated with sewn-on Wales patches. Ultra 70s. Starsky & Hutch had nothing on us two.
We crawled towards Anfield. Things did not look good. The Tartan Army, famed for their biennial invasions of Wembley, had given the game their full attention. The winners would surely qualify for the finals in Argentina. Scots were everywhere. Thousands of ‘em. Kilts & claymores. Each one over 6ft tall. Some held their tickets to the window of my coach. Their tickets said “Spion Kop.”

I pondered to myself. Surely I was about to die.

The game itself then. Wales showed up well. An unglamorous midfield of Yorath, Flynn & Mahoney went toe to toe with the rampant Scots. Toshack up front. I was squeezed into the back of the McKop. “Go on Tosh! Get in there Terry!” I yelled from amidst the Tartan Hoards. An almighty giant glared down at me. In thick Glaswegian he spat out….”Know all theirrrr naymes da ya Sonnie……?” Being incapable of reply, I simply looked at him. The Grim Reaper sharpened his axe.

As half time neared, the scores were level. We had survived half an hour. Literally. This was an opportune time, we felt, to raise the banner. If you look closely at the BBC coverage, you can almost see it. If you look even closer, you can see Scotsmen dismantling it to remove its poles. The banner lay trampled on the floor of the Kop as I grappled to retrieve it from Tartan hooves. Somehow, I managed to claw our regimental colours to safety, Scottish footprints notwithstanding. I still have it.

But if the aforementioned narrative has introduced the theatre of the occasion, painting a picture of the evening, stick around. You ain’t seen nuthin yet….. 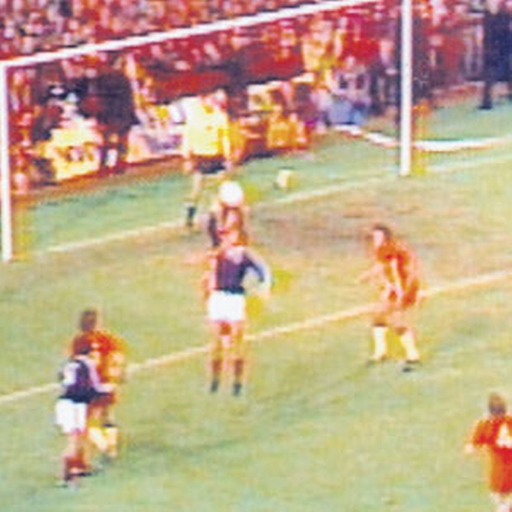 Just over an hour in, Scotland won a throw in at the Anfield Road end. Miles from where I peered at events, from within a tiny enclave of Wales fans at the back of the Kop. Suddenly it’s a penalty. Who? Why? Impossible to say from my distant vantage point, though the explanation of events has haunted Welsh fortunes for years. Welsh centre half Dave Jones has jumped with Joe Jordan in the penalty area. TV footage shows a navy-clad arm swing into the hair, as the ball is helped forward by the Scotsman’s fist. The ref has seen it differently and awarded Scotland a penalty. Jordan is seen “celebrating” by waving his clenched fist in triumph.
Like I say, this incident still rankles, some 40 years later. Has the referee spotted a push or other infringement? We think not. No sign of VAR here….and Don Masson coolly slots away the spot-kick. Cue Scottish mayhem all around. The entire ground was full of gleeful Jocks. Dalglish added a second as the Welsh pushed forward in search of an equaliser. It was my cue to leave.

I had lost Gary, I had lost the poles from the banner, which was now wrapped my waist as I tried to look inconspicuous outside the ground. Pockets of Scotsmen were busy “picking off” stray Welshmen. They got at Gary….but not the one in the hoodie with the enormous belly. I made the coach. It had been awful. Simply awful. 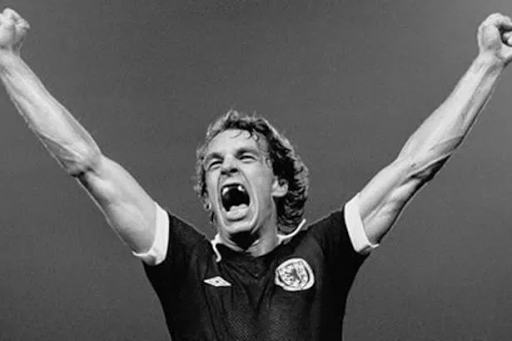 To this day, Jordan remains the most detested figure in Welsh football history. Terry Yorath describes how the 'toothless cheat' would deny it to his dying days, which may be necessary if by some cruel fate the sad event should occur in the presence of somebody from Wales.

Football eh. Sometimes I wish I didn’t care so but then, whatever would I do with the time?
This piece was kindly written for @TFHBs by David Collins - you can follow him on Twitter @DavidCollins29a
You can also read some of David's guest posts here...
Three Lions, a Pitch and a Wardrobe
Cardiff City: Like Father, Like Son

Unknown said…
Hi David ! A very interesting and well written article. As a Scotsman, I would say that it was clearly not a penalty and that Scotland rode their luck to win that night. Perhaps it would have been better if they had not, then the humiliation of Argentina would not have happened !

I would disagree, however, with your comment that in those days people did not wear football tops to games. From my memory of Scottish football at the time many teenagers and those in their twenties did so, at internationals and ordinary league and cup games. Given the lack of covered areas on the terraces and the wet and snowy weather in which many games were played, it is a miracle that they kept good health. I also remember many middle aged and retired men attending games dressed in suit,shirt and tie as well as overcoat and hat