Football and Music: A Brief History

By The Football History Boys October 15, 2018
It's coming home...it's coming home...it's coming! The words that no one could escape this summer as every news outlet seemed to join in on England's World Cup achievement. What was also common was articles explaining just why football fans were saying these three words. In 1996 The Lightning Seeds and comedians Frank Skinner and David Baddiel joined together to spur their nation on in Euro '96. Football was returning to its place of birth - Britain. For us at The Football History Boys - what we really want to find out is the relationship between the beautiful game and music. It is clear that it is no modern phenomena and it has its origins at the very start of football's extraordinary history.


Walk into any football stadium and you'll hear a number of things. Abuse at the match officials, someone scoffing down a half-time pie and of course songs. Songs and chants are a must for any decent atmosphere and bring with them more than just a nice melody. Music on the terraces is about identity. Each song has its own unique allegiance to one side or another and looking deeper into them will prove this point.

It is the same now as it has been for the last 100 years. A quick trawl through the British Newspaper Archives highlights this very aspect. In 1894 we can see a newspaper article in the Bath Chronicle writing about songs sung by fans at the Brighton Society, 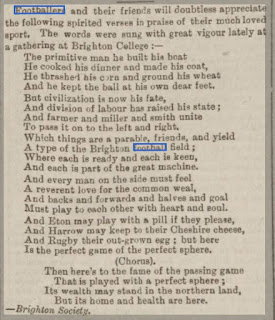 The song above is testament to the unwavering popularity the sport saw in its infancy. This trend would continue throughout the resulting decades and into World War II. In fact, throughout the archives, football songs are often written by fans and sent into the newspapers - open to the criticism of supporters and journalists alike.

"Football Yes, Football, is a song which  is proving very popular, especially amongst followers of the winter game. It has particular local interest, for both words and music are written by Mr. G. T. Francis. F.R.C., who is the Organist at Ardingly College. The tune is lively one, with catchy refrain, while the words are easy to learn and are written in the true sporting spirit. Utilized for community singing purposes, the song should prove very successful. Its price is sixpence."


Holt notes the importance of the music-hall in the growth of the game. In the 1920s for example, footballers were sometimes to appear on the music-hall bill. Footballers were beginning to grow in status and celebrity.  Matthew Taylor writes that fans would often take songs from the music hall and adopt them as their own. Over time, these tunes would become ingrained in the very identity of the clubs they supported.

This notion is perhaps no clearer demonstrated than it is by the song 'You'll Never Walk Alone.' Unbeknownst to football fans, it origins lie in the Rogers and Hammerstein musical, 'Carousel'. Following the 1958 Munich Air Disaster, it was seemingly first sung by Manchester United fans soon after as a demonstration of unity in a time which shook the very foundations of British football. By 1963 however, the song had been adopted by another club - United's bitter rivals, Liverpool

Following the recording by scouser Gerry Marsden, Liverpool supporters began to sing the anthem regularly and the rest is history. It is one of football's great sights to see when the Kop roars the song before a European Cup game at Anfield. The song itself is so woven into the very fabric of the club that the title is on the team's crest. Celtic fans will be quick to also claim the tune as their own - using it frequently since their 1966 Cup Winner's Cup tie with the Reds.


"It’s no wonder, then, that the poignant lyrics have found a permanent home at Anfield, fixed forever in wrought iron above the gates of the stadium as a permanent reminder to fans that football is more than just a sport, it’s family."

The 1960s had thrust music into the mainstream more than ever before and the art form would take on new and increasingly experimental styles. The 1970s and early 1980s would see songs sung by more than just the fans. Even the players were starting to get involved. 'Back Home' was recorded by the English national players before the 1970 World Cup. The song was immediately popular, reaching number one and remaining there for 3 weeks.

By the 1980s, football and music were now hand-in-hand. World Cups and FA Cup Final appearances seemed to be the ideal opportunity for a club to test their vocal chords. From Scotland's 'We Have a Dream' to Ossie Ardiles' infinite line, "In the cup for Tott-ing-ham" - music was as much a part of a club's identity as flags, rattles and scarfs. By the end of the decade we would see 'The Anfield Rap' show off John Barnes' musical skills before he was once again called upon for perhaps the sport's greatest number.

World in Motion by New Order is actually pretty good. The song features the rapping vocals of England's number 10 and also reached number one in the charts. Combing dance (rave) music and rap it would define the genres of the following ten years. Indeed, the 1990s could be seen as the golden age of football music. The aforementioned "Three Lions" was belted out around Wembley in 1996, before returning to the charts two years later for France '98. Fat Les' "Vindaloo" also merited decent chart success and the rise of Britpop saw artists proud to show off their club allegiances - Oasis and Manchester City comes to mind.

Today, the football song seems to be a thing of the past. It would be surprising to see Harry Kane singing his heart out in the name of pop music. Perhaps the last real tune with player backing was sung by the Manic Street Preachers and the Welsh National Team before Euro 2016. Nevertheless, in the last few months the rise of 'Bands FC' has seen the links between football club, music and location thrown together once more. It is a celebration of two different pastimes and one which we hope returns once more.


So why is all this important? Simple. It's a theme which has occurred again and again in our writing - Identity. So much about football's success its way to help people develop an identity and a brotherhood which they couldn't find anywhere else. From the pre-War music-hall to the modern day use of spotify and itunes, football and music have grown together. The popularity of one strongly correlates with the other and we've barely even scratched the surface of this subject. There is surely more to come!