By Gareth Thomas - February 09, 2014
In February 2013 up in the attic bedroom of our student house, Gareth Thomas, Ben Jones and Ollie Jackson after another prolonged football debate decided it was time we did something about the question, 'Who is the best player in the World?'. Housemate Liam suggested setting out to find the greatest 50 players of all time, this swiftly grew to 100, 150 and 200 before we settled on 250. Our original website www.top250.webs.com is still there to answer the debate but we furthered our work to blogging about the beautiful game starting up www.thefootballhistoryboys.blogspot.com.

"The former Tottenham Hotspur and Monaco maestro is hailed by many as the best creator that the English game has produced in a generation and the cliché goes that any other nation would have built their national side around him." www.goal.com

"El Niño was a goalscoring machine for the Reds, a natural heir to predecessors Robbie Fowler and Ian Rush in the iconic No.9 shirt, with his prolific finishing and unquenchable thirst to find the back of the net thrilling Kopites for three-and-a-half years... His impact was instantaneous, with an exquisite finish on his Anfield debut against Chelsea setting the tone for a season in which Torres would surpass the 30-goal mark and evolve into the focal point of Benitez's master plan" Liverpool FC's 100 Players Who Shook The Kop - #9

"As a player, Laurent Blanc was one of France's most loved and respected servants - a composed and calm sweeper who read the game superbly and was big and physical, he was a key component of the side which won the 1998 World Cup and Euro 2000." www.extrafootie.co.uk 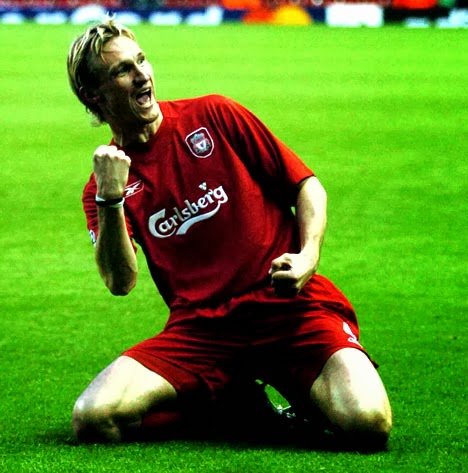 "Liverpool's decision to part with £2.5million to secure the services of Finnish defender Sami Hyypia during the summer of 1999 will forever rank as one of the smartest pieces of business the club has ever conducted. Robust and powerful, dominant in the aerial challenge and a consummate reader of the game, the centre-back was an efficient footballer at the same time - comfortable in possession and a threat in the opposition penalty area." Liverpool FC's 100 Players Who Shook The Kop

"During his time at Old Trafford Jaap Stam was arguably the best defender in the world. He played a crucial part in Manchester United's amazing treble winning season, culminating in that magical night in Barcelona when United beat Bayern Munich to win the Champions League. Immensely strong, a brilliant ball-winner and possessing a fantastic awareness that allowed him to break down attacks before they began, Jaap Stam was described by Dutch legend Johan Cruyff as "a one-man defence". www.icons.com

"Zibi Boniek is one of the greatest Eastern European players ever. He started his career in his birthtown club Zawisza before moving to one of the great Polish clubs, Widzew Lodz. Boniek was included in Poland’s 1978 World Cup squad as a 22-year-old and impressed many with his tireless running and commitment... Four years later in Spain, Poland had a better team and Boniek was excellent as his country won bronze medals. Arguably his best performance of his career for Poland came in a second phase match against Belgium where he scored a magnificent hat-trick. One of the best hat-tricks in World Cup history." www.planetworldcup.com

“He was a miracle. A human marvel who carried an aura about him.” Sir Alex Ferguson

"A bear of a player with the delicacy of a violinist - that's how one onlooker once eloquently described Graeme Souness. It fitted the bill perfectly, for here was a fearless midfield general who, despite a reputation as a hard man, possessed the most subtle of touches." Liverpool FC "Past Players"
http://www.youtube.com/watch?v=ygVgxYa3mlo - Here he is showing off that 'hard man' reputation!

"After learning his craft with a ball of rags on the streets of La Coruna, Luis Suarez went on to become one of Spain's greatest players of all time and in 1960 became the first and to date only Spaniard ever to win France Football's coveted Ballon d'Or." www.FIFA.com