By Gareth Thomas - February 18, 2014
In February 2013 up in the attic bedroom of our student house, Gareth Thomas, Ben Jones and Ollie Jackson after another prolonged football debate decided it was time we did something about the question, 'Who is the best player in the World?'. Housemate Liam suggested setting out to find the greatest 50 players of all time, this swiftly grew to 100, 150 and 200 before we settled on 250. Our original website www.top250.webs.com is still there to answer the debate but we furthered our work to blogging about the beautiful game starting up www.thefootballhistoryboys.blogspot.com.

"Rui Costa wasn’t just an immensely talented playmaker whose sublime skills graced Serie A; he was also a member of a now rare breed of footballer, those who are loyal to their clubs and put that loyalty before monetary gain.  On the pitch his mesmerizing skill and superb range of passing caused endless problems for defenders. Costa can be held up as a shining example of  how an attacking midfielder should play – he could drift around the pitch and influence the game from anywhere, with pinpoint cross field passes slicing open defences." www.forzaitalianfootball.com

"For such a tall player, Kluivert possessed a remarkably impressive ‘first touch’ and quick feet. Similar to footballer Ronaldo, he often used the Cruijff Turn to great effect to go past defenders. Kluivert also utilised his height and physique to dominate aerial balls and was considered to possess one of the best headers in the contemporary game." www.legendsinfootball.com

"Overmars became a vital cog in the Arsenal machine which brought the Double back to Highbury in Wenger's first full season. That 1998 vintage had the power of Petit and Vieira and the guile of Bergkamp. Now the blistering pace of Overmars made them an awesome counter-attacking force.Bergkamp was probably the main man but Overmars was his ultimate wing man. Right backs all across the country were given a torrid time as Overmars ran at them and jinked inside or sprinted onto weighted passes inside the full back from the likes of Petit and Bergkamp." Arsenal's Greatest 50 Players

"To help mark UEFA's Jubilee in 2004, each national association was asked to nominate its most outstanding player of the past 50 years. Croatia chose Davor Šuker as their Golden Player. Golden Boot and later Golden Player; even before he had earned global acclaim by scoring six goals at the 1998 FIFA World Cup, Davor Šuker had won a place in Croatian hearts." www.uefa.com

"One of the leading lights of the global game in the 1990s, Liberia's George Weah remains a superstar in Africa. Although he never had the opportunity to grace the FIFA World Cup finals, Weah made up for it with a hugely successful club career. George Weah was a towering figure on the '90s football scene... An exceptional goalscorer, it is no exaggeration to describe him as the precursor of the multi-functional strikers of today. Quick, skilful and boasting a powerful physique, fierce shooting power and deadly finishing skills, in his pomp Liberia's 'Mr George' was rightly considered one of the giants of the game." www.FIFA.com

"His name may not be as well-known as that of his former Real Madrid team-mates Alfredo Di Stefano and Ferenc Puskas, but in terms of the number of trophies won during his career at the club, Francisco Gento is ahead of both his erstwhile colleagues. Indeed, he is considered one of the finest left-wingers of all time, as evidenced by his staggering medal collection." www.FIFA.com 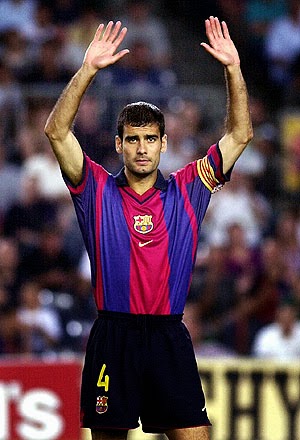 "Pep joined La Masia at the age of 13 and rose through the ranks at the youth academy of Barcelona for six years, making his début in 1990 against Cádiz CF. Guardiola played as a defensive midfielder and spent the majority of his playing career with FC Barcelona. He was part of Johan Cruyff's "Dream Team" that won Barcelona's first European Cup. After 17 successful years, the Barcelona captain left his boyhood club, and joined AS Roma in 2001. He further continued his footballing career with Brescia, Al Ahli in Qatar, and Dorados de Sinaloa in Mexico." www.goal.com

"Christian Vieri is one of the most famous and well respected Italian strikers of recent times. Although he had a nomadic career taking in 12 different clubs, his success for Inter Milan and Lazio, along with his prolific scoring record for the national team, earned him a place in Pele’s top 125 living footballers list of 2004." www.forzaitalianfootball.com

"Rarely over the years have Chelsea signed a genuine world superstar at the peak of his powers. One such player was Marcel Desailly who cost £4.6m from Milan in June 1998. He was twice a European Champion, being the first player to win the title with different clubs in consecutive seasons, and had won the Italian league twice in the previous five seasons. Just to add to the glamour he won the World Cup with France within six weeks of becoming a Chelsea player." Chelsea  FC