This year will mark 100 years since the outbreak of the First World War. After decades of global tensions slowly rising due to the growth of various European armies, the assassination of Austro-Hungarian Franz Ferdinand in Sarajevo sparked the greatest international conflict ever seen. So far, The Football History Boys have looked at the roles played by footballers during the Second World War and in depth at the Royal Air Force's sporting history. The Great War of 1914-1918 was the first time however, that footballers began to answer their nation's call to the front-line of global warfare.

To discuss the role of footballers during the First World War, is to first understand how such a conflict began. The nineteenth-century was, in Layman's terms the age of empire - Great Britain, France, Germany, Russia and other leading world nations had began to increase their size and wealth by creating colonies across Africa, Asia and the Americas. The era had seen the Crimean, Boer and Franco-Prussian Wars (to name but a few) develop a need for militarisation to highlight a country's strength and ideology. Despite many of Europe's royal families being closely related, it did not make for a friendly continent.

Britain and France were the to two leading nations in terms of militant prowess and power, boasting armies of superior size compared to the rest of Europe. The newly unified Germany under Kaiser Wilhelm II (Victoria's Grandson) had other ideas, following the construction of the revolutionary British destroyer HMS Dreadnought, an arms race was established. Various alliances had been formed between states before 1914, culminating in two opposing groups of power - The Allies (Britain, Russia, France) and the Central Powers (Mainly Germany and Austria-Hungary). Austria-Hungary had seen problems of their own due to the bubbling cauldron that was the Balkans and the 1908-09 Bosnian Crisis intensifying relations between them and the rest of Eastern Europe. When Bosnian Black Hand Gavrilo Princip assassinated Austrian Archduke Franz Ferdinand - The First World War had begun.
But where does football fit into this? In previous pieces we have talked about in some detail the early formation of the Football Association and how the 1900s and 1910s affected the global game. Football had become the national game in Britain and slowly, much like many of the globe's superpowers had wanted to do, began to take over the world. Football Historian Matthew Taylor has written that by the outbreak of the First World War,


"association football had acquired much of the shape and the meaning that was to define its role in the course of the twentieth-century."[1]

Such ideas are forgotten in the modern day, the common perception that football took shape after the Second World War are, in the main, inaccurate. Of course post-war developments did take place in the game, but in terms of structure - especially in England - football was a similar game to the one we watch today. For some, the modern day superstars like Ronaldo, Messi and Ibrahimovic are a phenomenon far removed from those playing a century ago. In terms of wealth and lifestyle this may be, but in terms of idolization and being central to supporters' lives this isn't the case. The 1900 FA Cup Final between Spurs and Sheffield United attracted over 100,000 spectators and the 1914 tie between Burnley and Liverpool 72,000 (including King George V).

Why are we writing this? To highlight that footballers were important in the early twentieth-century, not just because they made money, but also instilled pride and mattered to the general public. Dave Russell notes that, "By 1914 it [football] lay at the heart of much English male culture".[2] Indeed, the Football League actually kept running for the first year of the war (1914-15) albeit with the players urged to undergo "military drills and ample rifle shooting practice."[3] This absence from the frontline did not sit too well with the wider British opinion, The Times were soon to make clear the message "Duty Before Sport", making sure that football stadiums were used as places for enlistment of players and fans alike.[4]

Despite much national disdain for the game continuing, examples cn be found of people wanting football to continue for the good of the country and to rally the public. The Aberdare Reader mentioned one man's view,


"A friend of mine deplores the steps that are being taken to lessen the interest in the game of football during the present war. 'It's a shame' he says, 'that our national game should cease! Everybody cannot go to war, and there must be some to work and continue our trade at home. Therefore these fellows must have a little pleasure. If football is to cease, why are picture-halls and music-halls allowed to continue?' In the words of a well known writer, 'we are not a nation of mourning, but a nation full of hope and enterprise.'"[5] 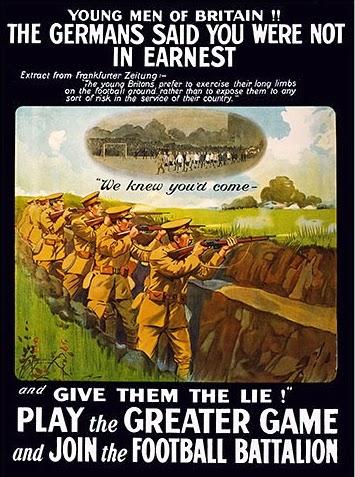 In terms of famous names involved in the fighting, it is easier to spot those from Britain, due to the game being a more popular affair in the United Kingdom. In 1914 a special battalion was set up for footballers interested in joining in the war effort, The 17th Service Battalion of the Middlesex Regiment. Set up by William Joynson Hicks, a politician, its first member was Bradford defender and England international Frank Buckley who would go on to become a Major in the army. The battalion, which fought at the Somme in 1916 had the household names of 2nd Lt. Walter Tull (the first black senior British officer), Fred Keenor (Cardiff City FA Cup winning captain) and England superstar Lt. Vivian Woodward amongst the ranks. However, the battalion would receive a significant amount of casualties, again showing that even the footballers weren't immune to the grim nature of war.

Response to the "Footballers' Battalion" is fairly ambiguous, although positively received in the respect that fellow citizens were actively enlisting, the fact that it took until 1915 to take effect meant for some, 4000 healthy men were not doing their duty. Again The Times was quick to notice any resentment, one letter to the editor in 1915 attacks the FA for their slow response,


"'To be a good footballer you must be big, strong, courageous, active and alert'...all the qualities needed in a soldier. What have they done? An official wrote that there were over 4000 registered paid professionals. These men were the one class of the community who were in special training and conditioning when war was declared. There were enough of them to form three or four battalions, yet months have past before there was any attempt to form one football battalion."[6]

The writer of the letter would carry on to state his disillusionment with the fact the league was still active. However, before the 1915-16 season could begin, the Football League was suspended, not to be restarted until 1919. The final goodbye to the sport was the 'Khaki' FA Cup Final between Sheffield United and Chelsea - coincidentally the match was our "Game of the Decade" in Football By Decade: 1910s.
Finally, the First World War has proven a broader topic than I first thought before researching into the game's history, but the role played by women footballers should also not be forgotten in the present day. Women in 1914 still couldn't vote and were living in a misogynistic society ran solely by men. Tim Tate's Girls With Balls: The Secret History of Women's Football (which I reviewed in August) is the most detailed account of women's football before, during and after the Great War. During the global conflict, the role of females changed as they began to be introduced to factory work to keep up with the mass need for arms and weapons.

Teams like the 'Dick, Kerr's Ladies', 'Blyth Spartans Ladies' and the 'Bolckow, Vaughn Ladies' all began to compete in front of large wartime crowds. The lack of men's football from 1915 meant that the women's game could take off, becoming a source of enlightenment and hope in a period dominated by anything but. Tate describes the new "Munitionette Football" as "vital lifeline" to war widows, children and wounded soldiers. Crowds of 5000 and more would watch the games, with money from tickets raised for various wartime charities.[7]


More could be written about women's football during the war, as it could the men's, but any extra information on the impact of the conflict will have to wait for another piece! Footballers at War has developed into one of the broadest, enlightening and often frustrating topics we have began to study. The stories of various soldiers, players and civilians alike are integral to study, in order to discover just how we have got to where we are today.