What's In A Nationailty Anyway? The Home Nations Agreement Explained

By Gareth Thomas - December 28, 2013
To start off The Football History Boys would like to say we hope you had a Happy Christmas and wish you the very best for the New Year! However for me, whilst following the plethora of Christmas sport, there has been something that's been bugging me: as the World Cup approaches why are we having messy debates over foreign born players representing countries they reside in? It's something that needs clearing up and to do this we have to look at the Home Nations Agreement.

Now I'm not questioning the reasoning behind people being either for or against players representing neutralised countries, in fact I do think it's something that needs looking at; but what I'm not in favour of is seeing the high profile figures of the game getting the rules wrong. To understand the background of the debate lets look at some history... FIFA previously allowed a player to change his nationality, Real Madrid legends Ferenc Puskas and Alfredo di Stefano being the most notable examples who represented 2 and 3 sides respectively. Problems also existed upon the break up of former FIFA nations such as West Germany, USSR and Yugoslavia. Players were eligible to represent 2 nations which got confusing and often difficult as countries once split or united had a history of animosity toward each other.


In 2004 FIFA decided a change was needed to make its policy different as many nations, particularly in Africa and Asia were giving citizenship to footballing immigrants with no connection to the country in order to call them up to the national side. The new ruling ordered that a player must have a "clear connection" to the country they wished to play for, giving us the current state which people understand as needing a parent or grandparent to be from the country if they were not born their themselves. Added to this a player is able to play for a national side if he had lived in the territory for 5 years after reaching the age 18, all these include the ability to play for a different senior side to the one represented at youth level if the application for change was placed before a player's 21st birthday.

To add to the confusion there are a number of Non-FIFA nations who have international sides, Gibraltar (who have recently just been accepted), The Basque Country (represented by the likes of Ivan Campo) and The Isle of Wight to name a few have all played fixtures where players will not effect their status in regards to FIFA.

So, that's the rules set out by the world governing body and it is this 5 year residence rule that excites England fans at the prospect of Manchester United's Adnan Januzaj and most recently Southampton's Morgan Schneiderlin being eligible to don the white strip. However, for the home nations (England, Wales, Scotland and Northern Ireland) it is not that simple, the Home Nations Agreement exists. This is an agreement that exists to stop situations such as the one that surrounded goalkeeper Maik Taylor. Taylor was born in Germany but his English father gave him British citizenship, using this he chose to represent Northern Ireland despite not having any ties there. This is where to wording of "territory" became important meaning his (grand)parent would have had to be from Northern Ireland for him to have any chance of representing them. 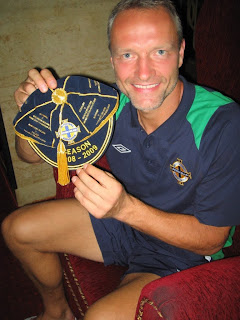 Maik Taylor - Not even slightly Northern Irish
Whilst Taylor was successful there were a number of unsuccessful attempts such as Nacho Novo failing to play for Scotland and a number of Northern Irish efforts, to clear things up further a new agreement was draw up in 2009. This closed the loophole of having a British passport allowing eligibility for 4 national sides and also removed the residency clause. This was instead made an 'education clause'; therefore a player must have engaged in 5 years of educations in a territory before the ages of 18 to be considered.

These education laws are what scupper England's chance of agreeing for Schneiderlin or Januzaj to join up with the national side and these won't be the first either. You may recall England's failed attempts to call up Mikel Arteta or Manuel Almunia who would both otherwise qualify under the FIFA guidelines but fail due to the Home Nations Agreement. It's not just England who miss out though, as a Wales fan I was once excited about the prospect of Angel Rangel, Swansea's adopted Welsh full back and someone who has professed his love for the country by even doing homeless work here planning for us but this was turned down as per the agreement.

Is this something that we should be looking at though? Jordan Rhodes and Andrew Driver (who was actually only 4.5 years educated in Scotland) both turn out for Scotland despite no family ties while Ben Turner and Ryan Shawcross both turned down Wales despite eligibility because they felt no connection to the nation (something I respect immensely). 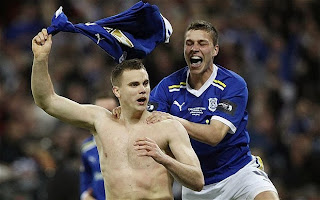 Ben Turner (Topless) turned down the chance to represent Wales
On the continent there are countless examples of players ignoring their birthplace to pick a new nation: Pepe & Deco Brazilian born who played for Portugal, numerous German national team players including Lukas Podolski who was born in Poland, Marcos Senna Brazilian born who won the European Championship with Spain in 2008 and Mauro Camoranesi, Argentinian born Italian World Cup 2006 winner who only qualified for the Azzurri through a great-grandparent. 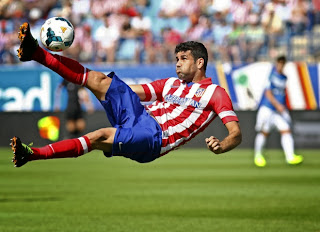 The latest example of a player defecting to a new side is Diego Costa of Atletico Madrid who used the residency rule to turn his back on Brazil (to their dismay) and join Spain as the World Cup approaches. This made me personally extremely excited as the prolific goal scorer looks set to lead the Spanish line and solve the problem of a forward player that has even seen Cesc Fabregas take the 'false number 9' role in the absence of an in form Torres/Soldado/etc. This though, is because I am backing Spain, Del Bosque and Diego Costa to tear things up and make history (again)... how I feel about this type of defection in general though is much more murky.

One angry blogger for Eurosport on Yahoo's website calls for a scrapping of the Home Nations Agreement to allow England to level with the rest of the world. I do agree that this extra clause puts the Home Nations at a disadvantage on the national stage but I also want to see in an ideal world a country represented by for example, Welshmen (even if this mean harms the quality of a side). Cardiff fans sang to Wales captain Ashley Williams in the South Wales Derby "Ashley Williams, you're not even Welsh", someone who has played 230 times for Swansea but was in fact born in Wolverhampton.

The angry blogger makes the point of how do you define a nationality as it is just a legal relationship between a person and a state? Fair point, it causes plenty of arguments too, take the Boateng brothers for example: both born in Germany but while Jerome represents them Kevin Prince elected Ghana causing a family rift. Thiago Alcantara, Brazilian parentage, Italian born but chose Spain after spending most of his life there, his brother Rafinha though chose Brazil... While these two are still best of mates I don't imagine it was an easy decision for them. 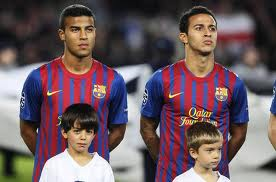 The Alcantara brothers at Barcelona

Do I have a conclusion? Not really, I just thought and wrote... My opinion would be that you should represent your nation of birth/parents birth or, if you've lived there a good amount of time under 18 (or maybe 21) similar to the Home Nations Agreement that country. Grandparents is too tenuous for me which is why Ben Turner rejecting Wales on that basis despite no real chance of England selection made me very happy. I've lived in Wales to Welsh parents since the day I was born, I'm Welsh but even if my parents were English and I had a shot at both (I wish!) 20 years of living in Wales would be enough to settle it.

To the angry blogger (who incidentally doesn't think Januzaj should wait for England), stop being envious of other national sides and look at your own. St George's Park is a superb facility, one that finally compares to the great countries and with the likes of Adam Lallana (ok no Iniesta but still... you won't win the World Cup even with him!) making waves then there's no reason to look further afield. One thing is for certain, this debate will rumble on and on for years to come!

What your opinion on the matter??

(Pictures not owned by The Football History Boys, used with thanks)
In-Depth Today's Stories Welsh Football