Arsenal Ladies: End of an Era? 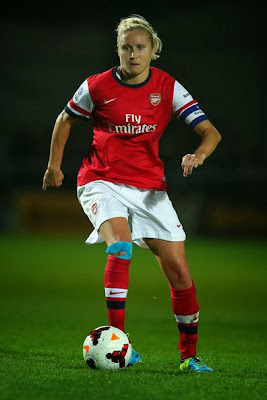 In the past I have made no secret of my stance on the women's game, and regrettably, the answer was not wholly positive. However, since Gareth and I founded +The Football History Boys in February, I am pleased to say my view has made a complete u-turn, in doing so I have discovered a fondness for the history of women's football, both past and present. One of the major female teams of the modern-day is the Arsenal Ladies, who just five years ago where described as "better than the men". The North-London team has dominated women's football in Britain and abroad for the last ten years, but the recent emergence of the game as a whole has driven the development of numerous challengers to their crown. Is this the end of an era for Arsenal's Ladies?


Arsenal Ladies are the most successful women's British football club of all-time, since their formation in 1987, they have gone on to win fourteen league titles as well as the Women's Champions League in 2007. Rachel Yankey, Faye White, Kelly Smith and Steph Houghton are too some extent household names for their exploits for club and country, exemplifying the emergence of a game which ten years ago was rarely talked about. The first part of the piece is to look specifically at Arsenal and their influence on the global surge of the sport, before dissecting whether the wider growth has hampered the side rather than helped them.

The team was founded in 1987 from within the men's side - a highly successful team in their own right at the time - it was kit-man Vic Akers, who became the manager of the team until his retirement in 2009. By 1987, women's football was beginning to grow, especially after the inaugural UEFA European Championships in 1984 & 1987, albeit internationally, but England finished runners-up in '84 and fourth in '87, prompting a rise in women's participation in the sport. In 1991, the Women's Premier League was formed with the Doncaster Belles topping an eight-team table. Arsenal, despite not being included in the division due to their infancy would still manage to win the League Cup defeating Milwall Lionesses in the process.

1992-2000: The following season brought Arsenal their first chance in the top-flight. The result? Winners. In fact it was not just the league title won by the team as a treble was completed following wins in the FA and League Cups. Arsenal had introduced themselves to the top flight and they were going to stay there! By the new millennium, Akers' side had added two more league titles (1995 & 1997), three more FA Cups (1995, 1998 & 1999) and continued their dominance in the League Cup, extending their trophy cabinet to compensate for four more (1994, 1998, 1999 & 2000). It is the FA Cup win in 1998 which provided the most recognition for Arsenal's Ladies, enjoying an open-top bus parade alongside the successful men's team who had recently completed a "double" of their own - The Premier League and FA Cup. The inclusion of the women's team seen as something of step in the right direction, with concern to the growth of the women's game.

2000-2006: Arsenal's dominance continued in the new millennium, further league and cup victories spearheaded the emergence of the team as a semi-professional outfit (they had been amateurs until 2002). The early part of the decade was a huge turning point in women's football, as mentioned in a previous blog, as the game began to improve drastically after the international exploits of US professionals Mia Hamm and Kristine Lilly, as well as the arrival of Hope Powell to the office of England Head Coach in 1998. Arsenal produced numerous players for the national team like Faye White, Karen Carney and Alex Scott with latter two eventually transferring to the US professional league for a brief spell improving their own games in the process.

2007-: The 2006-7 season provided the most successful trophy haul in the clubs already illustrious history. Alongside winning all three domestic cups (four if you count the Community Shield), continental dominance was gained via victory in the Women's Champions League at the fifth attempt. Led by White, the side remained unbeaten throughout the tournament and spearheaded by an attack of Scottish international Julie Fleeting and Kelly Smith they managed to do something the men have never done - earn victory in Europe. A two-legged win over Swedish outfit Umea provided arguably the greatest moment in the team's history. In fact domestically, they even won every game in the league scoring 119 goals, conceded just ten. Since the 2007 season, Arsenal have continued to win numerous amounts of silverware - 5 Leagues, 4, FA Cups and one League Cup.

"Arsenal won the League for the ninth year running, and means that once again, it will be the women’s team, rather than the men, who are drawing the applause of the Emirates Stadium crowd as they parade their latest trophy." - Metro, 2012


But what about the main question of this article? Has the recent emergence of women's football as a whole provided  decline in the Arsenal Ladies? Firstly the formation of the Women's Super League (WSL) has catapulted football to the mainstream, even earning a financial jackpot in BT Sport's coverage. Coverage from BBC Three of the UEFA Championships has provided investment into the women's game shown with the rise of the Liverpool Ladies to the WSL crown, contested hotly by not Arsenal, but Bristol City Ladies. Even the sacking of Hope Powell, a women who revolutionized the game can be seen as progressive, too many near-misses proved not good enough for England and Great Britain in the 2012 Olympics.

I was lucky enough to be at the opening game of the Olympics, which saw a Steph Houghton free-kick beat New Zealand 1-0 in front of 25,000 fans in Cardiff. It was a large attendance for women's football and one which continued to grow for the remaining fixtures, until defeat by Canada saw any medal hopes dwindle in London. It is Steph Houghton which provides the reason for this wider question of Arsenal due to her recent transfer to Manchester City. Houghton was described by Jacqui Oatley after London 2012, as an "overnight success that saw her face splashed all over the national newspapers", an idea which seemed alien five to ten years ago. As well as shining internationally, she also has been a linchpin for Arsenal Ladies and their dominance. Houghton's transfer, which was main story news on the BBC Sport website means she joins fellow England internationals Toni Duggan, Jill Scott and Karen Bardsley at City, a transfer she believes necessary due to their plans for the future, plans that Arsenal, no longer under Vic Akers, lack.


It is not just Manchester City's spending which prompts the questioning of Arsenal Ladies. The aforementioned Liverpool Ladies also provide food for thought following their WSL title, which included a 4-0 away thrashing of Arsenal at the Emirates Stadium, another milestone in women's football as the men's ground was used, a notion which until the 1980s was not even possible following the FA's misogynistic rule of not allowing women to compete on FA grounds after 1921. The Liverpool Ladies, who have been intertwined with the men in the "one-club" mentality of the Merseysiders have symbolized the rapid, recent growth of the game, even training with Suarez, Gerrard and co in March at Melwood. This has made possible the signings of 2013 player of the year Natasha Dowie, international centurion Fara Williams and Iceland's Katrin Omarsdottir. It is a way of running the club which teams across the board can take notice of, even to some extent Arsenal, as Liverpool swept the board at the recent Women's Football Awards and proved themselves a side not likely to give up their crown any time soon.
"This is a football club for all, not just solely for the men, Liverpool Football Club is very much a one club mentality and that's right across the board from the seniors, the women and right the way through to our kids...Women's football is taken much more seriously, which it should be" - Brendan Rodgers

Of course many commentators would disagree with me, saying that Arsenal are still the major side in women's football, the overall WSL table (2011-2013) highlighting this. However, for me, the emergence of Liverpool and now Manchester City could be too great a rise for Arsenal to match in the near future. Their quite staggering history means I wouldn't write them off, but is this the end of the dominant era for Arsenal? Quite possibly.