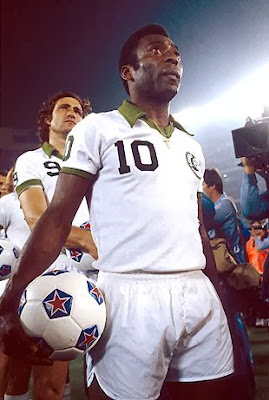 Let’s travel back 40 years for a minute. The New York Cosmos have just brought Pele out of retirement, the soccer world takes notice. In his many autobiographies Pele mentions that European clubs were always after him to play. Then Steven Ross goes crazy, and tries to buy every player who has thought of soccer. Which, looking back at it now, wasn’t that bad. Could this have been the start of the Real Madrid teams of the 90’s, Johan Cruyff’s Barcelona’s “Dream Team”, or the AC Milan teams with Gullit, Rijkaard, Van Basten? Or would have Blackburn in the 90’s bought every top player (and missed on some) to win their league? Could this explain why Manchester City was taken-over by oil barons?

There are countless soccer magazines out there, and I’ve read or bought pretty much all of the ones in America at some point. It is also very good that a big time magazine like +FourFourTwo talks about the NASL. “Franz Beckenbauer, Carlos Alberto, Giorgio Chinagalia, and Johan Neeskens, joined Pele at the Cosmos to create the world’s first soccer supergroup decades before Galacticos and Chelski”. That article was given to me by Cesar Diaz, a New York City based soccer writer for various publications, and one of the emerging experts on the old Cosmos. Before we get too far on here, let’s gloss the nicknames on those two teams. Galacticos means the super group that played at Real Madrid in the 1990’s. And of course Chelski is the Russian slang for Chelsea.

What this proves is that people are influenced by the past in the sport. Try as they might to reinvent the wheel and be a revolutionary, everything in the sport is based on what happened in the past. That is what is so key about the Cosmos and what the NASL showed was take these top players, and watch the success and money come in. There is a general thesis of the work here - if you can bring in talent, the money and the fans will come. And no one other than the NASL and the Cosmos showed this more. However, this was not a new idea, just bigger, more expensive and on a bigger scale than the old Bethlehem Steel teams.

The movie Once in a Lifetime, shows what the NASL would do to get anyone to join. Fuelled by the Cosmos using Warner Communication’s money, prestige and aeroplane, players came in from all over the world. The rest of the footballing world took notice of the crowds, and the media exposure. Okay, I’ll concede the point that the American media dropped the ball (pun intended), but for a short period of time in major markets you could not walk around in the sports community without hearing about your local club. Part of the appeal was people finally had extra spending money to burn, so there was the chance that people would go out and support another league, and more teams.

At this time in America, there were only three television networks, NBC, ABC, and CBS. Fox would not be established until 1986, and by that time the NASL was long gone. So any NASL match would pull in numbers, and be a big television event. At one time the league put six games on ABC 1979-81 and ratings for the six ABC games in 1980 averaged a “dismal” 2.6 million. As it was at the time, and the league didn’t think of this as a good thing because executive thinking that the numbers could potentially reach the NFL type of figures. If you move those numbers for six games to today’s standards, the MLS would love those. The sad fact is that they are part of an over-saturated media world.

If there is another thing the Cosmos brought to the sport, it was the club as a global brand. By having great players from around the world, you increase your visibility. The Cosmos were the first club to do that. That is because they were the first team to bring in the superstar names from overseas. How many people do you know now who actually still remember The Cosmos and were not soccer fans? There were a lot. I can say around my work, and I don’t live in a soccer area, or work in sports anymore, that there are still people who know of the old Cosmos. Obviously, if you have Warner behind you, transferring players can be easy and having that exposure is a big help.

Another advantage with signing great players is the marketing, and merchandise sales you can guarantee to flow into the club. In fact, if you want to look at EBAY, you could find the old NASL merchandise and apparel still. In this global market, teams are selling their jerseys all over the world. You can’t walk into a sporting goods store anywhere without seeing something to do with the top football clubs. Part of that, is directly related to the old NASL. If you search around enough online there are enough sites about the old NASL and their memorabilia. There are also many sites devoted to memories of the league, in fact, if you want just type in any club’s name and you can find a blog, or a site. I’m just waiting for someone to do the NASL video game.

Critics of this will also point out the negative aspects of buying up all the talent. One could say since Blackburn’s title in the 90’s they have been living a pipe dream, and will never see that again. Other people could point out Newcastle, spending and not getting the title. Or just look at the debts that Barcelona, Manchester United, and various other clubs have run up after buying talent. Oh and you can also say the NASL did not last because of the overspending.
On its face you can say that is true, but what has outlived all of that? That is, buying up all the top players for success, and ignoring the bottom line. Then there is the common thought that all clubs are run at a debt anyway, so why worry about the bottom line?

Finally let's not forget about the other teams in the NASL, as much as the Cosmos ruled the world and the soccer community in the states, there were other clubs, and they deserve a mention. The league didn’t start with the Cosmos, heck they weren’t even the first club to play football in New York City Generals. Ironically it began with Wolverhampton and Stoke City playing as “American” teams Cleveland and Los Angeles in 1967! To list every team that came and went in the NASL, would be difficult, since the league membership fluctuated so much during the years.

Let’s put it this way, there were a lot of teams in the NASL. Many of them were franchises that tried to match the Cosmos and failed miserably. Such is the case in sport and life, if something goes well, many try to copy it!