By The Sporting History Boys November 02, 2022
There are plenty of reasons why football has grown to become the world's most popular sport. The game's simplicity means it can be played by almost anyone, anywhere. Its incredible fanbases have helped to create unbeatable atmospheres, but it is arguably in the sport's unpredictability that truly sets it aside. Gareth and I have compiled a list of 10 of the Men's World Cup's greatest shocks. Covering almost 100 years of football history, the following upsets can tell us more than just what happened over the course of 90 minutes. 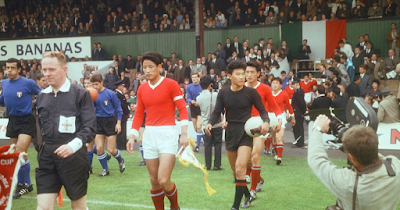 North Korea 1-0 Italy, 1966
The 1966 World Cup is one of the most discussed, dissected and analysed tournaments in the history of sport. A truly ‘national experience’, it was the first edition of the competition to feature extensive coverage on television and in the wider media.[1] The 1966 World Cup reflected the changes in wider society and helped to reinvent the image England, and the wider UK had created for itself. If, for English fans, the tournament holds an incredible reverence, the same can be said for those in North Korea.
North Korea is by no means known for its footballing prowess. Indeed, when googling the country, the most common searches involve human rights violations, war with the South and troubled relations with the West. In 1966, the nation (in its current state) was still in its infancy. A communist dictatorship had emerged following the Second World War, with the brutal Korean War splitting the peninsula in two during the early 1950s. Sport had emerged from in North Korea as a means to promote ideologies and 'one-up' their neighbours to the south. Such an impetus on the North Korean football team was no 'sudden occurrence' as the nation tasted victory 29 times out of 30 before the 1966 World Cup.[2]
The secretive nation had qualified for the tournament after a play-off victory over Australia. A 9-2 aggregate scoreline, was helped by 'meticulous preperation' [3], providing their fledgling nation with a major propaganda boost. Perhaps even more incredible was that their presence at the finals was helped in part by the widespread boycott of the competition from Africa (CAF), Asia (AFC) and Oceania (OFC). The confederations were frustrated at the lack of representation offered at the Euro-South American centric World Cup. With only one place offered between the three confederations, it is understandable as to why. Nevertheless, drawn against the USSR, Chile and Italy, there seemed little hope of the North Koreans making any significant inroads in England.

Arriving at the World Cup, the North Korean side was met with immediate suspicion. Described by the Daily Mirror as ‘Mystery Men’[4], a number of further newspaper articles can be found concerning North Korea’s anger at the state of their training facilities in Middlesbrough.[5] In comparison to other competing nations, North Korea had little to no support following them in England. The Sports Argus, however, was more akin to the abilities possessed by the 1966 World Cup's sole Asian representative. Highlighting their impressive record (at least in Asia) and the strict discipline instilled in the squad, they would be no pushovers. Moreover, their 'discipline, resovle and accuracy in passing [would] be hard to match'.[6]
An opening 3-0 defeat to the Soviet Union was followed by a credible draw against South Americans, Chile at Ayresome Park. The performances of the plucky underdogs led to the local population on Teesside becoming honorary North Korean fans overnight. This was further helped by the fact North Korea played in red kits, similar to those of Middlesbrough. By the time Italy faced the Asian representatives, the Azzurri were met with an almost partisan crowd.
Like their Korean opponents, Italy had also tasted defeat at the hands of the USSR. A victory over Chile, however, in their opening fixture would mean the tie against North Korea would decide who would progress to the quarter-finals and who would exit the competition early. The Italian coach, Edmondo Fabbri had warned that his side 'had lost faith in their ability' and were 'frightened by failure'. Further adding that attack was to be the form of defence, Fabbri was weary of the threat posed by North Korea.[7] 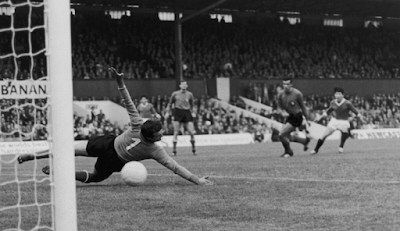 Just under 18,000 supporters would be in attendance at Ayresome Park to watch the two nations battle it out for a place in the last eight. After a cagey opening in which Italy showed glimpses of quality, in particular through the skill of Gianni Rivera, the Azzurri would lose their key man and captain, Giacomo Bulgarelli, to injury. With substitutions only being introduced to the World Cup four years after '66, Italy were to play the rest of the game with only 10 men. Against all the odds, Pak Doo-Ik’s 42nd minute goal would win the tie for North Korea. Slottinng the ball into the bottom left corner, Doo-Ik had shown remarkable composure in front of goal. With only ten players, the Italians couldn't match the energy and pace of the Koreans, being 'out-run to death' in the process.
It was, at the time, arguably the greatest shock in World Cup history. Described as ‘unglamorous, unfancied and unknown’, North Korea had delivered at the highest level.[8] Writing for the Daily Mirror, Newcastle manager Joe Harvey would comment that the result was a 'soccer sensation' and comparable with the USA's 1-0 triumph over England in 1950.[9] The Birmingham Daily Post and Aberdeen Press and Journal would echo the thoughts of Harvey, highlighting the sheer magnitiude of the result and comparing it to 1950. The Koreans had won the hearts of the host nation and by the time they met Eusébio’s Portugal in the quarter-finals, they were indeed the most supported nation left in the competition (except England of course).
For the Italians, the defeat led to major questions being asked across all levels of the game. Despite entering the '66 World Cup as one of the favourites, Fabbri's men had failed to progress beyond the group stage again. Incredibly, since their second World Cup triumph in 1938, the Azzurri had exited at the group stage four times between 1950 and 1966. Defeat to North Korea was to be seen as the low point in a turbulent two decades for the Italian game leading to wholesale changes and a renaissance in fortunes by the end of the 1960s. 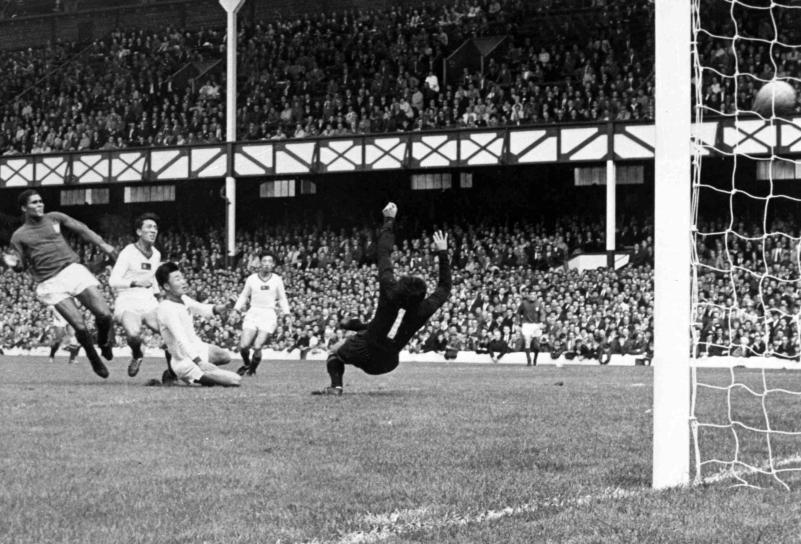 In the quarter-finals, despite North Korea racing to a 3-0 lead, Portugal would come back into the game and eventually defeat the North Koreans 5-3. The influential Eusébio was key to the triumph, scoring four goals at Goodison Park. Although exiting the tournament in the last eight, the Korean side had done more for its country’s global image in four matches than had been achieved through politics in the years before and after the 1966 World Cup. It shows the power football can have in changing opinions, opening previously closed minds and bringing people together from every corner of the world.
Notes:
[1] Ben Jones and Gareth Thomas, Football’s Fifty Most Important Moments (Brighton: Pitch Publishing, 2020)
[2] Fan Hong, Zhouxiang Lu, Sport and Nationalism in Asia, 2016
[3] Daily Mirror, 19 July 1966
[4] Daily Mirror, 01 July 1966
[5] Aberdeen Press and Journal, 05 July 1966
[6] Sports Argus, 19 July 1966
[7] Birmingham Daily Post, 19 July 1966
[8] Birmingham Daily Post, 20 July 1966
[9] Daily Mirror, 20 July 1966
©The Football History Boys, 2022