Canada at the World Cup: A (Very) Brief History

By The Football History Boys November 14, 2022
Canada, the polite neighbours to the north of the United States of America, are appearing at the 2022 Qatar World Cup for only the second time in their long history of Association Football. Their first and only appearance to date was in 1986 when the tournament took place down Mexico way. A tournament remembered for Diego Maradona; Gordon Strachan trying to jump pitchside advertising; Gary Lineker's hat-trick; Ray Wilkins red card and Josimar ruining Pat Jennings' birthday. 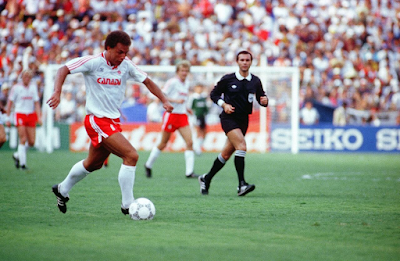 Yet Canada added some CONCACAF syrup to proceedings, being drawn as bottom seed with the then reigning European Champions France led by Michel Platini, the always dangerous Soviet Union and another Eastern bloc power of Hungary.
As history shows, Canada did not muster any points or goals in their three group stage matches, yet they were not humiliated. In their opening game, they held France to a one-nil scoreline, only conceding in the 78th minute to a Jean-Pierre Papin goal.
Following a period of intense training in Colorado - for the squad full of MLS personnel in the majority - at altitude to prepare the squad for the intensity of daytime heat of Mexico; the squad arrived optimistic about their chances to create a shock.
The unity of a minnow squad can never be underestimated, while devoid of any marquee name such as a  South American squad which may feature a major European league star - the squad held their head up high after that opening defeat to the French. 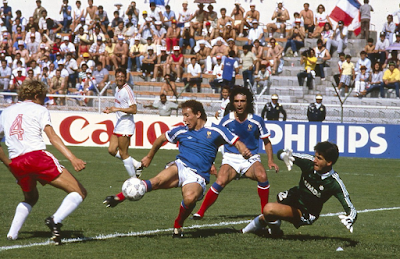 Four days later, the Canadians faced off against Hungary. In retrospect, it was this game in Irapuato that truly saw the potential for a positive result slip away. Hungary had lost their opening game to the Soviets 6-0, so Canada, following their resilient 1-0 defeat to the French, were made favourites in many people’s mind. Unfortunately, the Magyars scored after two minutes and the determination was lacking throughout before a second Hungarian goal ended the tie.
The final match versus the Soviet Union followed a familiar storyline for the Canadians, stout in defence but lacking penetration up front meant the eventual Soviet goals came in the second half from Oleg Blohkin and Olexsandr Zakarov.
Canada's campaign ended on 9th June, eight days after it began. Played three. Lost three. No goals scored. Five conceded. No points.
Canada have not come close to a World Cup in the intervening 36 years until the past year when a qualifying record containing only two defeats meant they joined confederation counterparts and familiar foes - United States and Mexico in qualifying for the winter World Cup. Qualification was cemented on March 27th with a 4-0 home victory over Jamaica with goals from Cyle Larin (Canada's all time top scorer with 25 goals), Tajon Buchanan, Junior Hoillet (a name familiar to English fans and playing with Reading currently) and an own goal. 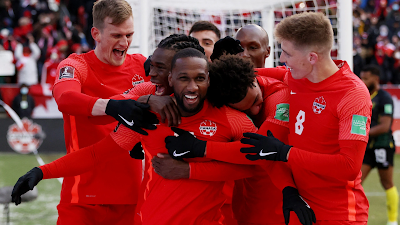 Unlike 1986's twenty two men - this time there are names familiar to World Soccer fans. None more so than Alphonso Davies who is a regular for Bayern Munich at the age of 22, married with the wealth of experience by captain Atiba Hutchinson (aged 39) and will hit a century of caps for his country if he starts all three group games (currently on 97). Fifteen of the 26 named for Qatar ply their trade in the European domestic leagues. Perhaps the most notable are Larin and Buchanan who both play for this season's Champions League surprise package, Club Brugge.
Canada enter the tournament ranked 41st in the world, which is not the worst ranking of those competing (Senegal are 71st) and they have not been handed as tough a group as their compatriots were dealt in 1986.
They have been drawn in Group F against Belgium, Croatia and Morocco. Now while two of those teams may prompt fear due to their heritage and consistency of recent years - both Belgium and Croatia are reaching the end of the cycle for this particular group of golden players; this promises to be the last World Cup for such luminaries as Kevin De Bruyne, Eden Hazard and Luka Modric. Morocco as with all African nations, provide a bit of the unknown and unexpected yet that is the last of the three group games for both sides. 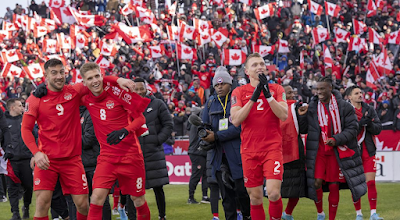 Canada open versus the Belgians on 23rd November before facing World Cup runners-up from 2018, Croatia four days later. The quick turnaround of games due to the truncated nature of this World Cup may provide the opportunity for a surprise across the eight groups. Group F matches with Group E which contains powerhouses Spain, Germany, Costa Rica and Japan. That is difficult for all of Group F sides but who knows when it comes to the World Cup.
Canada are on a rich vein of form, the greatest in their history. Will they score a goal for the first time? Or obtain that historic first point? The co-hosts of the next World Cup in 2026 (along with the USA and Mexico) are guaranteed another appearance, but lets hope the old adage of third time's a charm does not ring true for the Maple Leafs in 2022.
This piece was kindly written for @TFHBs by Jamie Garwood. You can follow Jamie on Twitter @JamieGarwood or @NextToTheAisle
©The Football History Boys, 2022