By Gareth Thomas - April 28, 2022
In a return to a favourite series of The Football History Boys, The Crest Dissected this time is written by @AlexHTheMAX, in the shape of the story behind Dunfermline Athletic's interesting triangular effort that celebrates its 65th year this season. 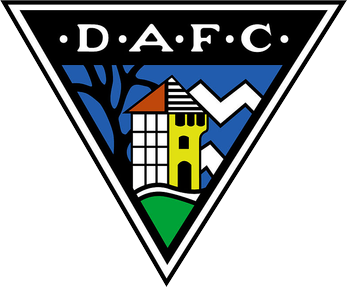 The current Dunfermline Athletic badge was designed in 1957 by Dunfermline High School Art Teacher, Colin Dymock and the 1957/58 season was a transitional one for the Fife side. The club won promotion after just one season in the old Scottish Division 2, following relegation from the top tier in May '57. They scorined a record 120 league goals in the process!

The crest uses the lettering DAFC to represent the initials of the club name. Below, the lettering depicts the Malcolm Canmore Tower. The tower was adopted by the town of Dunfermline to be used for the Burgh Arms and old way seals.

Malcolm Canmore was King of Scotland from 1057AD to 1093AD, and made his residence in Dunfermline within what is now Pittencrieff Park. The park is represented by the blue and black area behind the tower. The green area at the bottom of the crest is meant to represent the club's ground East End Park.

It was maybe appropriate that the club from the ancient Scottish capital commissioned the new badge when it did; as their improving fortunes going into the 1960s saw a decade of European football adventures for Athletic under managers Jock Stein (1960-64), Willie Cunningham (1964-67) and George Farm (1967-70).
Regular European Inter Cities Fairs Cup and Cup Winners Cup appearances (including a Cup Winners' Cup semi-final appearance in the late 60s) followed the legend that was the great Jock Stein. He led the East End Park club to the Scottish Cup in 1961 with a defeat of Celtic in the replayed final, and then top half of the table finishes became the norm under Stein and Cunningham, with Farm bringing the Scottish Cup back to the historic east coast town in 1968 with a win over Hearts in the final.
The first full decade of the DAFC badge saw other historic moments, including both Everton and West Bromwich Albion being seen off in Battle of Britain Euro ties involving Dunfermline, and although the halcyon days of the club ended in the early 1970s they did bounce back with a promotion in 1973 that saw them break scoring records in the UK.
Some other 'key swinging 60s' moments:
1966 - The now-Sir Alex Ferguson created a new club record by scoring 31 goals in the First Division during season 1965/66.
1967 - Alex Ferguson is capped on Scotland`s `unofficial` tour of Australia and New Zealand, and is transferred to Rangers for £65,000 - a record between two Scottish clubs at the time.
1968 - The Scottish Cup is won after Hearts are defeated 3-1. East End Park holds 27,816 for a League match against Celtic - a ground record.
1969 - Dunfermline reach the semi-final of the European Cup Winners Cup, only to be defeated by eventual winners Slovan Bratislava.
1973 - Following relegation from the top flight (and near bankruptcy) in season 1971/2 Dunfermline won promotion from Division Two with 95 goals - the highest goalscorers in Britain.
It's been a tough season in 2021/22 for Dunfermline Athletic but their badge remains a major talking point for football fans whatever division this famous Scottish club  finds itself in.
By Alex Horsburgh, written for @TFHB.
©The Football History Boys, 2022
(All pictures borrowed and NOT owned in any form by TFHB)
Scottish football The Crest Dissected