By Gareth Thomas October 29, 2021
There are Strollers, a Fairydean and a former club of 007 in the Scottish Cup Third Round in November. If you want to experience football with a feel of Brigadoon then definitely head north of the border for your cup ties says @AlexHTheMAX. 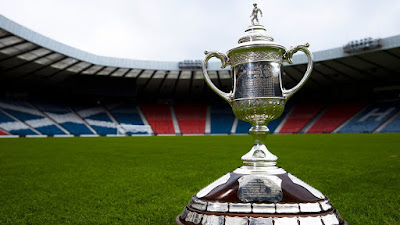 If you have access to the BBC Scotland TV channel, you can see two of the teams currently in the Scottish pyramid clash on the evening of Monday 29th November. Brechin City (relegated to the Highland League from Scottish League 2 last season, and featured recently on our site) play Darvel FC of the recently established West of Scotland football league (tier 5) in their televised match in the Scottish Cup 3rd Round (Premiership sides come in in Round 4).

It's a big night for the former Scottish Junior side from Ayrshire, who are now pushing for league status, whilst former league side Brechin City are searching for a good cup run to match their bid for promotion back to League 2 at the first attempt.

This writer felt a more deserving tie for the cameras was League One Peterhead's trip to the wonderfully named Civil Service Strollers, who play in the Lowland League (tier 5), but no disrespect to the teams who will be featured on the Road To Hampden at Glebe Park in Brechin.

You don't have to be a member of the Edinburgh Civil Service to play for Civil Service Strollers these days, but the name they were given during their formation in 1908 was a draw for many a football groundhopper in October when they visited Central Park in Fife to tussle with the bottom club in Scottish League 2.

Grass roots football fans from Leicester, Yorkshire and even Norway attended the tie, as part of the modest crowd of around 300, as Cowden took on the non leaguers 40 years after eliminating them 6-1 in a replay in the 1981/2 Scottish Cup.
In the end it was to be a bleak day for the struggling Fifers, and especially their longest serving manager in 30 years, Gary Bollan, who had preserved the club's 117 year status as a Scottish League club in recent times.

Cowdenbeath took the game to the non leaguers early on and went in front in the 13th minute when Liam Buchanan's cross was headed into the net by Kris Renton. The lead was short lived though with former Cowden player Euan Valentine equalising for the visitors just four minutes later.

In the 23rd minute, Strollers were awarded a penalty when Kane O'Connor fouled Alieu Faye inside the area. Faye took the spot kick himself but was denied by Cammy Gill down to his left in the home goal.

The home side went back in front in the 35th minute through Liam Buchanan after Mac Whyte had made two tremendous saves. But once again, Gary Jardine's Strollers side pegged back the Central Park side almost immediately with Faye making up for his penalty miss to head in from close range.

Two red cards within the space of three minutes around the hour mark saw Cowdenbeath reduced to nine men with both Buchanans heading for an early bath. And five minutes later Strollers were back in front with Faye getting his second of the game as Cowden's bottle began to crash in a match which will be a league fixture for the Fifers should they go down in May.

Substitute Mo Dukuray added a fourth goal in the 76th minute for the Pilton based community club to secure the Edinburgh side's passage to the third round of the Scottish Cup by an impressive 2-4 scoreline.
Within three hours of the Strollers cup success, Cowden were looking for their 36th manager in 47 years after they issued this statement online:

Cowdenbeath FC can this evening confirm following today’s Scottish Cup tie that manager Gary Bollan and his management team of Craig Easton and Ian Flaherty have left the club by mutual consent.

We most warmly thank them all for their hard work on the club’s behalf in their time at Central Park. Indeed Gary has been our longest serving manager in 30 years having been appointed to his post in November 2017. In that first season, taking over the club when it was at a low ebb, Gary preserved our League status with an against the odds win over Cove Rangers. Building further on that Cowden advanced to finish 6th and then 4th under Gary and his team in the next two seasons. Last season was a very difficult one given the many trials and tribulations visited on us by Covid and its truncated nature.

Season 2021/22 though has produced a run of very disappointing results and the club has fallen to the foot of the League 2 table despite the management team's best endeavours. And as everyone will appreciate, ‘football is a very much a results based business’. We do though most sincerely wish Gary, Craig and Ian all the very best for the future.

The search for a new manager is of course now underway and Goalkeeping Coach Dave McGurn will take charge of team matters in the interim assisted by club captain Craig Barr.

Other non-league teams to look out for in the Third Round of the cup in Scotland are Bonnyrigg Rose (Sean Connery once played for them pre-Bond), Auchinleck Talbot (always a tricky one for TV and radio presenters in England) and the aforementioned Darvel, who beat league side Stranraer away in the last round.

See also Gala Fairydean Rovers of the Scottish borders who would surely be the top team in the Game of Thrones Premier League! Banks O' Dee are based in Aberdeen while Tranent look to shock Stirling Albion away.

Watch out also for East Kilbride in this round of the cup too, they almost demoted Cowdenbeath in a play off a couple of years ago, but failed to take Cowden's League 2 place when they lost on pens after an aggregate draw.

It's the magic of the cup for sure in November and to use some good old Scots language to finish with "ye canny beat"
By Alex Horsburgh, written for @TFHBs
©The Football History Boys, 2021
(All pictures borrowed and not owned in any form by TFHB)