Welsh Football's Greatest Moments | The 58-Year Wait is Over

By The Football History Boys - March 01, 2021
It’s three minutes to 5 on a warm summer afternoon in Bordeaux and we are singing our national anthem like we haven’t sung it before. We are singing our national anthem at a major football tournament. For the first time in 58 years. Our time has come, we are out of the wilderness, we are here right now and it is actually happening. As we roar through Mae Hen Wlad Fy Nhadau, raw emotion is flying around, and grown men and women stand, some with tears, some defiant, some lost in thoughts and prayers. At its conclusion I look up into the pale blue sky and say a quiet message to a beloved and recently departed. It is actually happening. 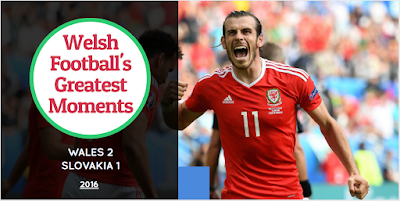 For most Wales football fans it has become a lifetime’s ambition to see their national team at a major tournament and we have had plenty of giddy moments, only to horribly fail at the final hurdle. The Joe Jordan penalty ending our World Cup 1978 ambitions. The 1982 World Cup campaign failing on goal difference after a final game three nil defeat to USSR. Paul Bodin’s penalty miss in the 1994 World Cup campaign, a match I had a ticket for but ended up watching in a fever, from my couch with a damp towel across my forehead. The 1-0 home defeat to Russia in the 2nd leg play-off for the 2004 Euros. I was so dazed that afterwards I walked a lap around the deserted streets of the Millennium Stadium, drowning in a sadness I struggled to climb out of and walking five miles home which helped exhaust my troubled mind. My group had made the fatal error of discussing campsites in Portugal. All close encounters, and all ending in bitter failure and a conviction that our lives were destined to never experience an international football tournament.
So here we are playing at the magnificent Stade de Bordeaux, the Red Wall is in full voice and we are defending the goal at the Welsh fans end. We were ready for a tight contests. That was until Slovakia’s superstar Marek Hamsik sliced through our defence and stroked the ball towards an open net with only three minutes on the clock. It’s agonizing. But then full back Ben Davies slides from nowhere and remarkably clears off the line. A huge shot of reality settles over the masses and we think, ok, it’s great to be here but let’s not embarrass ourselves.
To get here, my travel buddy Matt and I travelled 800 miles from south Wales, setting off two days earlier, in my 24 year old campervan. We passed or were passed by dozens of Welsh football fans with flags flying and car horns blowing. The excitement was palpable, and the stereo USB stick was on 1000 tracks random play. We stopped for a free overnight camp at a deserted site near Le Mans, survived a torrential downpour an hour from Bordeaux, parked at the airport and bussed it into a hostel in the city centre. We’d made it, so it was time for beer. 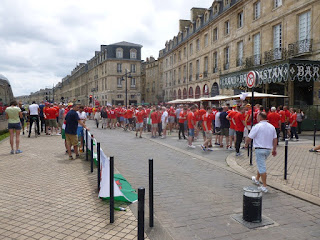 We are 10 minutes in, and Gareth Bale has just smashed a 30-yard free kick into the Slovakia net. The big man has stepped into the international spotlight. Madness obviously ensues and everything gets crazy and our dreams have now progressed. We’ve quickly flown through ‘just being there’, to ‘not being embarrassed’ to ‘wouldn’t it be nice to see us score’ to ‘what if we actually win this?’.
The night before, Wales fans enjoyed the delights of Bordeaux. We were lucky to make our tournament debut in this wonderful city. Walking around corners of elegant buildings we would stumble into fans in red, spirits soaring and all of us knowing with 100% certainty we were in the only place we wanted to be. It was so uplifting seeing so many Welsh tops out in a force never seen before – 30,000 jerseys in our favourite designs – Umbro, Adidas, Kappa, Lotto, Admiral, they were all on display, many originals, many reissues from JD Sport. And bucket hats, home and away designs, like daffodils popping up in early March back home.
It was lovely to be welcomed so warmly – Welsh fans and French locals got on fine together, and it amused me to see young French people earnestly enquire about the words to our football anthem “Don’t Take Me Home”. They knew the tune but needed to know the words.
The match day tram journey to the stadium was a special one. We sang every song from the Wales football handbook dozens of times over so thought it appropriate to fit a Scarlets rugby song in – Sosban Fach had never sounded better and even Stradey Park would have clapped. Locals jumped on and jumped off but the songs kept coming.
Back on the pitch and we are doing fine. We are denied a stonewall penalty after Skrtel attempts to take the head of Jonny Williams off and Slovakia aren’t threatening our goal. The half time whistle blows, we retreat to the bar to queue for 0.5% Heineken beer, chat about how great life is and try to act casual, as if leading 1-0 at half time in our 1st tournament for 58 years is run of the mill. 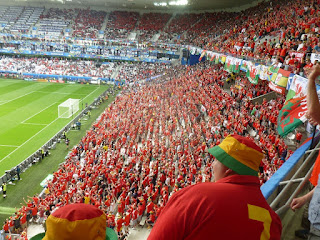 Tragically, reality comes crashing through on the hour mark. Ondrej Duda equalizes for the Slovakians and immediately last night’s late beers and today’s early tipple don’t seem such fun. The beginnings of a hangover seep through. We are parched and alcohol less and have to fight our way out now. This isn’t going to be a stroll, we need to dig deep. We don’t want a draw, we want the win now and so we sing the boys on.
Enter Hal Robson-Kanu. His name is sung even if he isn’t in the ground, let alone on the bench or on the pitch, and on this day he repays us massively. With less than 10 minutes to go he gets on the end of an Aaron Ramsey surge and puts the ball away, a beautifully scuffed shot and its 2-1 to Wales. He scores at our end which is perfect and runs towards our corner which is a bonus, everything goes crazy for the second time on this historic day and this time we know the day will be ours. We will experience the best day out that only football can supply.
The last 10 minutes go by in a blur, though our post clatters from a bullet Slovakian header. Finally, the whistle blows and we have won: Wales 2-Slovakia 1, in our first tournament match for 58 years. Now we have experienced what so many fans from other nations take for granted. It is glorious. We walk out of that beautiful stadium into the night air, exhausted, emotionally drained but happy. Later we will be out singing again, 137 verses of Don’t Take Me Home, each verse getting louder, more vigorous. The full-scale party is on and Bordeaux is red.
As a footnote, my brother passed away in April 2016 due to cancer, so I doubly made sure I enjoyed and savoured every moment of my time in France that summer. He was there with me that great day and throughout the tournament.
Wales went on to top the group, smashing Russia 3-0 (it could have been 10) in the best Welsh performance I have seen against top level opponents before edging Northern Ireland 1-0 in a battle of Britain last 16 match. With momentum building, we would sensationally beat tournament favourites Belgium 3-1 in the quarter finals after going a goal down, only to finally fall against Ronaldo’s tournament winners Portugal in the semi-final.
The memories will last – driving through beautiful French valleys and vineyards, coaxing my camper over the Tourmalet, the highest Pyrenees pass, as we previewed stage 8 of the upcoming Tour de France.
Jumping around with a massive grin to the Super Furries’ sensational Toulouse festival headline appearance. The Man Don’t Give a F@*k had never ended so manically. The ‘interesting’ night-time walk back from town to the campsite in Toulouse. Being the only non-yellow topped person in a sea of Swedish fans behind the goal v Italy. Joining up with old friends and meeting new football fans from all over Wales and further afield. Those 10-minute chats with strangers, everyone friendly and no words shouted in anger. Just being an important part of a major tournament. So important in fact that UEFA officially recognized the Red Wall for making an outstanding contribution to the tournament, praising our passion and behaviour.
There will be 30,000 memories of our summer in France and a million more memories from back home. Welsh fans, you did your nation proud.
This piece was kindly written for @TFHBs by Mark Goddard. You can follow Mark on Twitter @MarkyGee6
©The Football History Boys, 2021
Welsh Football Welsh Football's Greatest Moments