The Influential Game - Football and Charity

By The Football History Boys - September 13, 2021
Football has an incredible influence on the world around it. With more countries part of FIFA than there are members of the UN, it is easy to see why. The modern game is often criticised by onlookers, supporters and even politicians for being a sport removed from the public, and one in which money conquers all. There is some weight to these arguments, but are they always accurate? The short answer would be no. Football has a long an intriguing history with charity stretching right back to the origins of its codification in 1863. From early public schools to the incredible free school meals campaign of Marcus Rashford - let's see how the beautiful game has tried to make the world benefit from its influence. 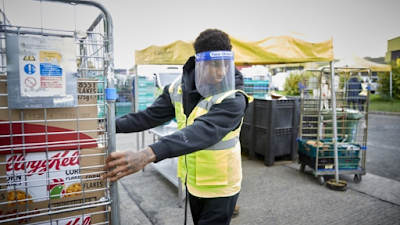 Football has been closely linked to charitable acts ever since its codification. As a sport, the original intentions of the game were never for financial profit. Gate receipts welcomed at the ever-increasing number of matches during the 1860s and 1870s could therefore be distributed the local charities. According to Vray Wamplew, the SFA was the pioneer of the charity match with regular fixtures occurring after the association's formation in 1873. Noting the arranged tie between representatives from Dumbarton and Glasgow, its raising of £100 for the Glasgow Western Infirmary in 1876 perhaps provided impetus to the later Glasgow Charity Cup.[1]
Following the success of charity fixtures north of the border, it was not long before English clubs and associations attempted to follow suit. In Sheffield, Lancashire and Birmingham, competitions were founded with the primary aim of providing much needed funds to various local institutions. Before long, the nation's governing body, the FA, would also help to redistribute its growing wealth to a number of charities. Vamplew writes that the FA Cup semi-final between Blackburn Rovers and Sheffield Wednesday in 1882 produced a larger gate than had been anticipated, with the £70 surplus being handed to the mayors of Blackburn and Sheffield.
Charities were not always solely recipients of financial aid but would also take an active role in using the game to help their situation. Perhaps the most notable example of this is in the establishment of Celtic FC in 1887-8. Intended to alleviate poverty in the Catholic east end of Glasgow, the club was designed with the intention of raising funds for the charity of its founding father, Brother Walfrid - the Poor Children's Dinner Table. Such moral reasoning for the foundation of an entire club are perhaps distantly removed from the modern day arguments which surround 'new' clubs like RB Leipzig in Germany.
As with many things in football's history, even Celtic's moral beginnings would be quickly tarnished within 10 years. Vamplew is quick to determine that the initial 'philanthropic ambitions' fell away under the weight of 'commercial considerations'. Virtually ceasing its donations and becoming a limited company, its moral decline was perhaps mirrored by the wider shift of the game towards professionalism.
In spite of this, football would still have a charitable element deeply rooted within the game seen clearly by its reaction to the Ibrox disaster in 1902. The FA would donate £500 to the disaster fund and the game's replay (played at Villa Park) saw its proceeds, as well as others, also donated to the fund.[2] £3000 was gathered in total to go alongside the SFA's contribution of another £3000. It was not just disasters in the game which drew the attention of the nation's football associations. Indeed, the sinking of the Titanic in 1912 shook the nation to its core. The Football Association council would approve a donation of 200 guineas to the Lord Mayor's fund and offer the gross receipts from the Charity Shield tie between Blackburn and QPR.[3]
The Charity Shield is perhaps football's most recognisable contribution to society. Started in 1908, with a tie between Manchester United and QPR, its replay saw an impressive 50,000 spectators cram into Stamford Bridge. The annual fixture took the place of the previously played Sheriff of London Charity Shield which had been contested between the leading Amateur (usually Corinthian) and Professional clubs. However, after the Amateur Football Association's split from the FA - the fixture would take on a new identity. Funds were distributed after the match and split between the opposing sides to give to charities of their choice as well as further contributions given to local charities.

Moya said…
Thanks for this article - a reminder of good is at the heart of football!
Common Goal (which i'm involved in) is another - trying to embed not only the notion but also the practice of Football4Good into the whole industry and its economic systems. Many players (Mata, Schmeichel, Rapinoe, Morgan & many more) are giving 1% of their salary, joined by managers (Klopp), administrators (Ceferin) and clubs (FC Nordsjaelland) to support the UN Sustainable Development Goals & tackle the greatest social challenges of our time. www.common-goal.org
22 December 2020 at 22:16