By The Football History Boys - February 19, 2020
As an Arsenal (something I often say as a disclaimer), I was saddened to hear the news of the closure of The George on Holloway Road. Although I lived near the stadium some years ago, my rent meant attending a match was too expensive, but an ‘Arsenal’ pub I could attend. The pub was rammed match days but less so on other days. This has not been uncommon at Arsenal. Other pubs of note that Arsenal fans have frequented have also closed in recent years including The Bailey (now a high end chicken shop - surely an oxymoron?) and The Herbert Chapman pub became ‘Filthy’s’ which has since closed. "So what" I hear you say? A recent press release stated that British pubs are closing at a rate of two a day. But, I was interested in the new variant of ‘the pub’. The restaurant which attaches itself to a football team or a period of football. The two restaurants I was interested in were The Piebury Corner, which has two restaurants now. One on the Holloway Road and one near Kings Cross and bases its Pies on Arsenal Greats (see menu attached).


The Golazio is a recent entry into this market, based around Pizza and beer (and not near a ground either), the idea of the restaurant being:-

Golazio is a new bar on Camberwell Road which was born out of our unforgettable 90’s love affair with Football Italia serving Italian craft beer and huge slices of Pizza. Was it Nessun Dorma and the 1990 World Cup? Was it the way James Richardson transported us from sofas to another world, where players caressed the ball and the refs had a bit of personality? Or was it Gazza, Signori or Lombardo? 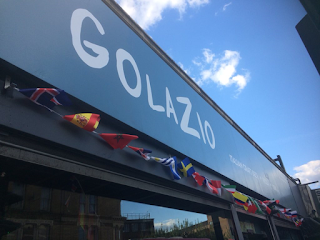 I was interested in the idea of fans still meeting but not (totally) around beer, especially in London, an area in which residential space (read pubs) has become premium real estate.

In looking at both institutions, I will look at their commonalities. This article is more about looking how both have utilised the ‘past’ to create a ‘brand’ from our memories. It is not a review of the food and ambience but a review of changing socio-economic environment fans go to experience football. It’s also not a critique to two highly successful businesses, but how football has changed.

The staple of many fans prior to the Second World War was a pint in the pub and maybe hot Bovril if served at all. After world war 2, attendance at football had risen to an all time high of 41.2 million people in Britain in the season of 1948-9. This was due to a number of reasons, primarily the price of attendance after the war and the further lack of televised broadcast until 1953. James Walvin in ‘The People’s Game’ said:-

It might seem a contradictory point to note that …..the...main institution which spawned football teams in these [early] years was the local pub……[Who] offered a place to meet, somewhere to change, a venue for news and information; a place where teams, management convened.


The pub, within fan culture, has also been very territorial. For example, Armtrong and Harris (1991) have looked at how Sheffield Wednesday and United fans have tried to ‘take over’ a pub of the rival fans or discussed it within the pub at least. Martin Kerr (2007) even wrote a book on pubs that home and away fans can attend in the English league.


Increasingly though, the pub's hold has somewhat diminished (to a degree) as a reference point of pre-match place to visit. This could be for a multitude of reasons. Puttnam’s (2000) important book Bowling Alone has indicated a decline in shared space [the pub]. Furthermore, the decreasing number of public houses as mentioned earlier being one of the reasons for a change in using a pub. The changing socio-economic place that supporters have come from previously (King, 2004), is no longer working class, which could indicate the pub, often seen as a working class and male domain (Dixon, 2013) is less used.

The commodification of football has increased fandoms core base, it has been argued, with Giulianotti maybe terming these as a Flaneur fan, which is:-

The commodity-centered mediation of football qua entertainment intensifies, so the fan identity comes under pressure to enter the realm of the flâneur, the unreconstructed cool consumer. (Giulianotti, 2002)


The point of Golazio and Piebury though, is that they provide a point of reference to the past. Golazio has been very supportive in Italian Football, being supported by the Italian Football blog Gentleman Ultra as well as PR blogs on how to create a successful business. Golazio's idea was quite simple, as its owner pointed out, he wanted to replicate a past that even involved Nessun Dorma playing in the loo’s (music reference to 1990 World Cup). Having James Richardson coming to the bar and following on twitter (Football Italia presenter from the 1990s) as well as a distinctive colour scheme provided a reference point for football fans of the era. As the owner stated:-

“I wanted to make sure that if a total Anorak walked in, they couldn’t pick holes in the theme or say we missed something”


Creating this, creates what Bourdieu (1986) called symbolic capital. He described it as:-

It thus manages to combine the prestige of innate property with the merits of acquisition. Because the social conditions of its transmission and acquisition are more disguised than those of economic capital, it is predisposed to function as symbolic capital.


Creating a ‘past’ to people from the 1990s such as these brings in more affluent punters (they are aged between over 30 going by the date of both programmes).

The Piebury has done similar things to the Golazio, but rather than basing it on a programme, it has based itself upon the football club in its area - Arsenal. The name of the restaurants is a play on words. It sells pies, the former ground was Highbury. Combine the two and you get Piebury. The first restaurant is on a corner and football entails corner kicks. (Ok. Maybe not quite Bill Hicks funny!). The similarities is that both restaurants have looked at the key support they get. They supply craft beer and quality food (pizza and Arsenal player inspired pies respectively), but also support cultural events such as book signings.

In many ways, going to these places has become the de facto way of visiting or watching a match. It’s also a way to reminisce on a glorious past. The 2017 exhibition of Arsenal by photography at the Piebury as does Golazio’s 2018 with Mark Hateley and Tony Dorigo. Both have tapped into this very well and obtained sell out crowds - and food and drink no doubt.

In many ways, the decline of the 'pub’ from the football scene has become a death knell. But, I do feel research has not really covered such business models as Golazio and Piebury Corner and looked closer at how they indicate a desire to look at the past, to feel part of a community and to reach the community that the pub could not afford. Any takers?

*Greatest televised moment in ‘The George’ was winning 5-2 against Spurs and having a large bloke jump on me. I’ll always love ‘The George’.

Kindly written for @TFHBs by Les Crang - a long time (suffering) Arsenal fan. He has a Msc from Birkbeck in Sports Business management and given papers at the BSSH, Football Collective, Birkbeck Sportbusiness and Footycon on football and Rugby. He can be found on twitter at @morethanagame66

15. Kuper, S. and Szymanski, S. (2006). Soccernomics: Why England Lose, Why Germany, Spain and France Win, and Why One Day The Rest of the World will Finally Catch Up. 1st ed. LONDON: Harper Collins.