Women's Football: The Enigma of the English National Team

On Wednesday (10/07/2013) the Woman's European Championships get under way, with the ever-present England once again in the draw as a genuine challenger. The current crop of players, including Fara Williams, Stephanie Houghton and Karen Carney are even beginning to become household names. However, despite many differences with the men's team the female side do have one thing in common...numerous near-misses. Could 2013 be the year the ladies become the champions they no doubt have the potential to be?

The women's game has, in the last 20 years, grown at a staggering rate. Similar to the early rise of the men's game towards the end of the 19th Century, the sport has gone from strength to strength. The 2013 European Championships are the eleventh to date after the inaugural tournament in 1984. Back then the number of teams in the final draw was only four, with two semi finals before a two-legged final between England and Sweden, played across both respective nations. The second leg itself, being played in front of just over 2000 people at Luton's Kennilworth Road. The result a Swedish win. On penalties.

As far as the UEFA Women's Championships are concerned, the tournament has grown in popularity since the 1990s. With the growing strength of football in the United States and players like Mia Hamm and Kristine Lilly becoming national icons the game began to emerge in Europe. By 1997 the championship had doubled in size to account for 8 teams and the hiatus in between Euros lengthened to every four years. Previous tournaments had a only a 2 year gap and had been dominated by Germany.

Despite the gradual development of the European game, the women's 1996 Olympic tournament was won by the US, with Norway's bronze the only Europe-based medal. The 1996 tournament, was in fact the first time that women had competed in Olympic football highlighting the growth of the game. The 21st Century is where the fortunes of European football began to change. A gold medal four years later for Norway proved the new-found strength of women's football within UEFA, as they beat USA 3-2 a.e.t.

Since 2000, the Women's UEFA tournament has become one of football's best competitions. The 2005 tournament held in England even attracting around 30,000 fans for England's opening match against Finland, a 3-2 for Hope Powell's team. Recent memory has seen the championship continue to be dominated by the Germans, emerging victorious in both 2005 and 2009, comprehensively defeating England 6-2 in the 2009 final. Germany's star player being Birgit Prinz, who scored a staggering 128 goals in a record 214 appearances.

So where do England fit in all this? The women's game in the United Kingdom has offered one of Europe's most competitive leagues, the WSL (Women's Super League) and arguably the continents best club side in Arsenal Ladies. The side offering the likes of Rachel Yankey, Kelly Smith and Steph Houghton have all played their parts in the North London club's success and helped England become a force to be reckoned with.
However, despite the obvious potential and wealth of talent, the English team has been a team of near-misses, similar to their male counterparts. After finishing as runners-up at Euro '84, the women's team has since qualified for five of the last nine championships. Following a fourth place finish in 1987, three successive failures to qualify hampered the development and popularity of the sport in Britain. Despite finishing fourth in 1995, another failure to qualify and a group-stage exit in the new look tournament in 2001 highlighted the poor quality of the side.

It was former player Hope Powell who took over the reigns of England Head Coach in 1998 aged just 32. Powell has since gone on to produce a genuine contender for major international titles. Of course, no manager's ride is easy, the 2005 group-stage exit on home-turf exemplifying this. On the other hand the 2005 tournament brought with it the new breed of talent, including Karen Carney who scored a memorable 90th minute winner against Finland, aged just 17. Since then the side has had mixed form, with a quarter final defeats in the 2007 and 2011 World Cups, the latter a loss on penalties to France. In 2009 though, England reached the final of the Euros, but as previously mentioned were thumped 6-2 by Germany. The 2012 Olympics also catered for a surprise quarter-final defeat to Canada, despite representing Great Britain, the team was made up of predominately English players, apart from 3 Scots, like Arsenal forward Kim Little. 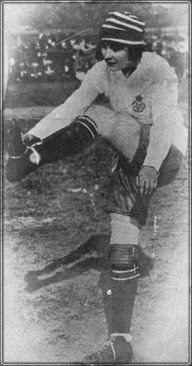 The 2012 Olympics did however provide a shining light in full-back Stephanie Houghton, the versatile player scoring 3 goals in all, including the tournament's opener, a free-kick against New Zealand. But who are England's greatest players ever? To find arguably the best, is to look back almost 100 years ago to Lily Parr, described by some and recently Horrible Histories as England's greatest ever goal-scorer. Parr managed to score over 900 goals in her career, was the inaugural woman to be inducted into the English Football Hall of Fame and participated in the first ever female International match.

"Big, fast and powerful, is tricky and can take corner kicks better than most men....She had a kick like a mule. She was the only person I knew who could lift a dead ball, the old heavy leather ball, from the left wing over to me on the right and nearly knock me out with the force of the shot..." - Joan Whalley

Present day legends can be found with Rachel Yankey and Kelly Smith, both of which have earned over 100 caps for the National team. Two weeks ago (26/06/13) The former became England's most capped player (men and women's) with 126 in total, a feat not to be over looked. Her Arsenal team-mate Smith is the England Women's top goalscorer with 46, within touching distance of Bobby Charlton's long standing record of 49. The exploits of these two individuals have done much to exemplify the strength in the modern ladies game and the hard work Powell has given in making the current crop of players household names.

What does the future hold for the women? The Euro 2013 tournament offers them a real chance of glory, and with the £100m St George's Park behind them, their preparation could not have been better. The strength of the WSL also can only continue to help, with large investments even going into the sport, for example the Liverpool Ladies team, who have signed players like Natasha Dowie and Fara Williams (who also has 100 international caps). The growth of the game recently also saw the Liverpool Ladies train with the men, proving an increasing sense of equality between the two sexes.


The Euro 2013 championship has been billed as "The greatest tournament in women's football" by the BBC, and the usual suspects will all be there. Hosts Sweden will look to draw on inspiration from the Hannah Ljungberg side from the early 2000s and could be a genuine contender. Seven-time winners Germany will be  the hot favourites to add to their collection of silverware, and the French and Norweigans also shouldn't be written off. As for England a relatively comfortable group-stage will mean they most likely play the Germans in the quarter-finals, could this finally be there year to end the national trophy drought and bring the prize home?!


In conclusion, the English women's national team has grown at a rapid rate over the last 20 years, after numerous failures to qualify, Hope Powell has inspired a revival of the beautiful game to Britain and surely sooner rather than later glory will return to England!