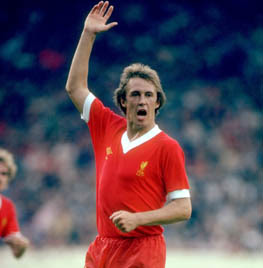 When someone mentions Liverpool in the 70s and 80s, you could be forgiven to think firstly of Dalglish, Hansen, Keegan and Rush. However, there is one player who is often forgotten despite being an ever present in the Liverpool XI and making a staggering 417 consecutive appearances from October 1976 to September 1983. A player up until 2003 was unmatched in European Cup triumphs. The man i'm writing about is Phil Neal.

In modern day football it seems almost inevitable that a player will pick up at least one injury every season, unless you are Michael Owen and seem to suffer one every five minutes. The likelihood of a player making 417 appearance in-a-row now is almost unthinkable. Former Liverpool man Brad Freidel's run of 310 successive league appearances for a number of clubs was an impressive achievement, but Neals run was also laden with success and trophies.

Signed from Northampton Town for £66,000 in 1974 to replace the ageing Chris Lawler, Neal would make himself an Anfield regular almost at-once. The manager who brought him to Merseyside was Bob Paisley, Liverpool's most decorated boss. Neal found himself in a side still reeling over the loss of their former leader and inspiration William "Bill" Shankly and trusting in "bootroom" member Paisley. The 1974/5 season provided Neal and Liverpool a trophy-less season, the only one during the full-back's Anfield career. The man the players nicknamed "Zico" due to his goal-scoring prowess, would go on to win 6 leagues, 4 European Cups, 4 League Cups, 5 Charity Shields, a UEFA Cup and a Super Cup. A Total of twenty-one awards and a trophy cabinet to rival the greatest players to play the modern game. With success came tragedy for Neal, a member of the team during the Heysel Disaster in 1985, one of his last games for the club, a difficult time for Neal personally and a poignant reminder that sometimes things are more important than football.

His position? Full-back. Often regarded by many as football's least glamorous position, not having the flair of a winger, the glory of a striker or being the centre of attention like it's defensive counter-part or the central midfield role. However, as his appearance record suggests, the role of right or left-back can become the most consistent and stable area on a football pitch. Liverpool's later right-backs Steve Nicol, Rob Jones, Markus Babbel, Steve Finnan and the current choice Glen Johnson could all adopt the title of "Mr Consistent" despite performing in an at-times underachieving Liverpool side from the 90s and 00s.

Capped by England 50 times (5 goals), at the time of Liverpool's succes it is without doubt that Neal would've been recognized as the great player he was. But the Anfield club's other heroes have gone on to pursue media careers or opt into management (e.g. Hansen, Lawrenson, Lee, Keegan and Dalglish). It's true that Neal went into management, having less successful times, Bolton aside, with Coventry, Cardiff and Manchester City. It is important football remembers the unsung heroes of the truly great teams throughout the  20th and 21st Centuries, be it a Dennis Irwin of Manchester United, Ivan Helguera of Madrid or Lauren of the invincible Arsenal between 2003/4. Without these players the great teams of old would have had nowhere near the success we read about today.

Yesterday, Jamie Carragher announced his retirement from football after a 16-year career, accumulating in over 720 appearances and scoring 4 goals, 5 if you count his deflected effort against Middlesborough in 2008/9.  The link between Carra and Neal is clear, although one played for only one club their respective careers, both can be considered as examples of Liverpool's most consistent players since its establishment in 1892 and have to be seen as shoe-ins for the top 10 in the Merseyside club's "Players Who Shook The Kop" list to be decided later on this year. Carragher's retirement also sees another legend depart Anfield, trophy-laden, but also with a sense of the what the club stands for, its ethos and an understanding for the passion involved in derby games, seemingly lacking from the recent 2-1 defeat to Manchester United. In conclusion, Phil Neal and Jamie Carragher will be remembered for the success, the passion and the commitment to the club and of course the five European Cup victories the club is internationally respected for. But without doubt Neal's fondest memory would be scoring in the 1984 European Cup final against Roma.