Wales Women's Football: A squad on the verge of history

By The Football History Boys September 01, 2022
Euro 2022 is over and history has been made. After an incredible competition, England have won their first international tournament, defeating an excellent Germany 2-1 at Wembley. The English media have celebrated the triumph and both back and front pages of the nation's newspapers have been used to promote the success. Most commentators and pundits are calling the victory a win not just for the Lionesses but for the women's game across the UK. The same competition also saw a first major tournament appearance for Northern Ireland just three years after Scotland competed in the World Cup. With this in mind, there is one of the home nations yet to reach a major finals - Wales.
In recent years, few could argue against describing the boom in Welsh football as its 'golden generation'. The men's side have reached back-to-back European Championships and have now achieved what many fans believed an impossibility, qualification for the World Cup. The tournament in Qatar is sure to have the eyes of the nation firmly fixed on Robert Page's squad as they compete at Christmas. Following the climax of the 2022 World Cup, the good news is that we only need to wait half a year for the Women's World Cup to begin in Australia and New Zealand. 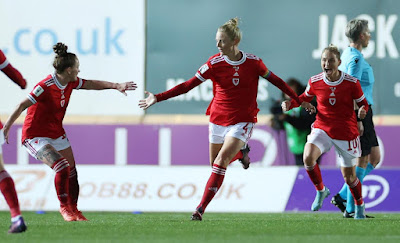 With just two games to go, Wales are second in their qualification group and in the play-off positions. It's a familiar position for the squad to be in having narrowly missed out on the play-offs in 2019 after ranking 6th out of 7 runners-up (only the top four made it to the play-offs). Furthermore, in 2014 we wrote an article entitled The Evolution of the Welsh National Team commenting that the 2015 tournament was within touching distance only for an agonising defeat to Ukraine in Lviv to end any qualification hopes.
Defeat to Ukraine in 2014 brought with it a change in leadership as Arsenal legend Jayne Ludlow took over as first team coach. Upon succeeding the popular Jarmo Matikainen, Ludlow's aims were clear, to reach a major tournament. Speaking ahead of the Euro 2017 qualification campaign, Ludlow was aware of the challenges the squad faced, “But the big thing is obviously to get these guys through to a major competition." With a squad growing in experience, many Welsh supporters believed this to be the side's best chance to date. Soon after, Bristol Academy centre-back Sophie Ingle was made captain, replacing the experienced Jess Fishlock.
Perhaps adding insult to injury, Fishlock was to be omitted from the Welsh squad for a qualifier against Croatia later in 2015. However, Ludlow's reasoning was to provide younger players with a chance to prove themselves in international football. Despite the omission, both Ludlow and Fishlock were quick to emphasise that their relationship was still positive with the latter tweeting her support to Ingle ahead of what would be another massive qualification campaign.
Ultimately, the 2017 campaign ended in disappointment as Ludlow's side finished 3rd in Group 8 behind Norway and Austria. Perhaps even more disheartening was the failure to attract a home attendance of over 1000 supporters.  However, in May 2017 the Women's Champions League Final was played in Cardiff to an impressive attendance of 22,433 proving that there was indeed a willingness of football fans in Wales to watch the women's game. The FAW looked to use the 2017 final to inspire the next generation of supporters and players, making use of football's impact on 'self-confidence, self-esteem, wellbeing, feelings of togetherness, motivation and life skills'
The start of the 2019 World Cup qualification campaign saw a tentative but results-driven Welsh side defeat Kazakhstan 1-0 home and away with a credible goalless draw against Russia played in between. The home match against Kazakhstan was boosted by an almost record attendance of just over 3000. Leading goalscorer Helen Ward would comment that playing matches at the Cardiff City Stadium made a difference,

"It does make a difference playing here (at Cardiff City Stadium), seeing our posters on the wall, just being able to play on a pitch like this in a stadium like this is just a great feeling. So we're very fortunate and feel very privileged."

Following their positive start to the campaign, a goalless draw dubbed 'Wales' greatest ever result' against England would set the tone for the years ahead. For all of England's chances (22 in all), Welsh goalkeeper Laura O'Sullivan was equal to them. "We're still a developing team with areas to work on, but the commitment and work ethic tonight... it was Welshness," said Ludlow. "From a female football perspective it's probably the best (result in Wales' history)." 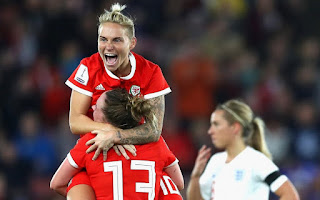 Attendances would remain the same until the side's final fixture at home to England. A 3-0 defeat in front of over 5000 fans left Ludlow's side heartbroken but able to see the positives of another near-miss. The late goals scored by England were the only ones conceded by an impressive defence over the entire campaign. It was a campaign heralded by rival manager Phil Neville as 'fantastic' with Ludlow echoing her English counterpart's sentiments before, perhaps harshly, commenting that her squad 'hadn't been good enough'. Some could argue that Ludlow's commitment to defence was ultimately to blame as only 7 goals were scored throughout the entirety of the qualification campaign.
Such negative football would see the following qualification process (Euro 2022) also end at the final hurdle, this time at the hands of Norway and Northern Ireland. Wales would excruciatingly miss out due to the inferior head-to-head results against Northern Ireland after two draws. Ashley Hutton's 94th minute equaliser in Newport would be the key goal in defining the group and seeing Northern Ireland qualify. It was a painful way to miss out for the Welsh considering their far superior world ranking (27 places ahead of the Northern Irish).
A credible but frustrating home defeat to Norway would see a side too focused on defence and distrusted in attack. After falling behind to Frida Maanum's second-half strike, Wales dominated the final quarter of the game, when Ludlow's offensive restrictions were lifted. It left many supporters questioning that if the side had started the way they had finished, they just may have pulled off a real shock. Three consecutive near-misses would mean Ludlow's time in charge would soon come to an end with the FAW citing that the national team needed improving 'just a little bit' to get over the qualification line.
<Read Welsh Football Fans excellent article here on Ludlow's departure'
Replacing Ludlow would be English coach Gemma Grainger. Having previously coached throughout the English youth set-up, Grainger was well aware of the challenge ahead of her. Similar to her predecessor, Grainger's primary aim is to reach a major tournament finals. Boosted by an experienced squad who are all too familiar with near-misses, Wales have started their 2023 World Cup campaign well. Scoring 21 goals in just eight games, Grainger has seen her side comfortably dispatch Kazakhstan (6-0), Estonia (4-0) and Greece (5-0) with only narrow defeats to a formidable France staining an otherwise excellent run of form.
In September, Wales play arguably their most important games since the 2014 defeat to Ukraine, an away match in Greece before a home tie against third placed Slovenia in Cardiff. The Welsh fortress, the Cardiff City Stadium, will be used for the latter game with upwards of 10,000 tickets already being sold (a national record). Although on the cusp of history, both Grainger and the wider Welsh squad are not getting carried away. Speaking ahead of the game, captain Sophie Ingle was well aware of past near-misses and is confident that this Welsh side can go that step further. "When we’ve fallen short in the past we’ve been a bit naive maybe. We were obviously younger and not so experienced, but now it’s about believing that we can do it."
Ingle is right. This side is different. Wales now boast an incredibly experienced squad with a sense of togetherness unbeatable in the world game. Greece and Slovenia will provide tough opponents but with growing belief and a team willing to learn from past mistakes, history beckons for the women of Wales.
Written by Ben Jones - Follow me on Twitter @TFHBs or @Benny_J
©The Football History Boys, 2022