By The Football History Boys April 09, 2021
Doncaster Rovers men’s team have spent the majority of their existence in the third and fourth tiers of English football and currently their women’s side Doncaster Rovers Belles play in the FA Women’s National League Division One Midlands. In the modern game, it can be argued that there is not enough recognition that Doncaster Belles were one of women’s football's most successful sides with 21 major honours between 1976 and 1994.
During this successful run they also finished runners-up in the National Division seven times, in the FA Women’s Premier League and Charity Shield twice and the Premier League Cup on three occasions. This included winning the league and FA Cup double in 1991-92 without losing a match before claiming the double again in 1993-94.

Their dominance was underlined by reaching eleven FA Cup finals in 12 years between 1983 and 1994, lifting the trophy on six occasions. Notable players for the Belles included Karen Walker and Gill Coultard who were inducted into the England football Hall of Fame.
Walker began playing for the Belles at just 15, where she would enjoy a 19 year stint at the South Yorkshire club. Her most notable contribution came in 1992 as Doncaster won the FA Cup for a fifth time. Incredibly, Walker would score a hat-trick in every round and back her domestic form by becoming a star on the international stage, scoring 40 goals in 83 appearances.
Captain of the Belles, Gill Coultard spent 11 years at the club over two spells making over 300 appearances despite her full-time job on the production line working for electrical company Pioneer. She would become the first woman and amateur player to reach 100 England caps, eventually winning a further 19. Women's football in the mid-1990s was a far-cry from the financial boom seen in the men's game around the same time - Coultard made her feelings clear in a 1996 interview with the Daily Mirror,

"I do feel a bit aggrieved when men can earn in one week what it takes me a year to make in my day job. When I look at the money, I wish I was a man...Far from making anything, football's cost me a fortune. We even pay £25 subs with the Belles as well as doing a lot of fundraising, because it costs pounds 12,000 a year to run the club."

The Belles ’first spell of dominance came in the Nottinghamshire League when they claimed their first title in the 1976-77 season and added a further 10 titles in the following 14 years. Their league dominance continued by winning the inaugural National Premier Division in 1991-92 as Walker and Gail Borman combined for 50 goals as the Belles scored 89 goals and conceded just four in 14 matches. 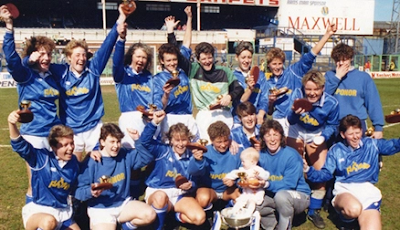 However, the following season would see newly promoted Arsenal inflict only the Belles' second league defeat in 15 years with victory at Highbury. Arsenal, founded by legendary coach Vic Akers would go on to claim the title and beat the Belles 3-0 in the FA Cup final as a new rivalry was born.
The two sides would consistently battle for the league title over the next decade, although at one stage Arsenal had beaten their new rivals in six straight matches - a run lasting more than two years - before falling to a shock defeat in the 2002 FA Cup quarter-final. In 2003-04, the Belles looked to be a fading force as they finished seventh and the following season avoided relegation by a single point.
Although the 2005-06 season saw the Belles finish fourth, they were still 27 points behind Arsenal who claimed their third consecutive title. By this time, it was clear that Aker’s side had taken over the Belles’ mantle as the most dominant women’s team.
The previous success of the Belles is even more remarkable given that the Football Association only allowed women to play recognised football in 1971 following the removal of the draconian ban placed in 1921. It was as recently as 2002 that the Belles turned semi-professional, signing full-time players for the first time in their history including former England striker Natasha Dowie.
In 2005, they merged with the men’s team and became Doncaster Rovers Belles and played home games at the Keepmoat Stadium between 2007 and 2018 although they now play at Rossingston Main FC’s Oxford Street.
In 2011, they were one of the eight founding members of the Women’s Super League alongside Arsenal, Chelsea, Everton, Liverpool, Lincoln, and Bristol Academy. However, disappointing campaigns saw them finish second bottom in 2011 and 2012 before their controversial relegation. After finishing bottom of the league, the Belles were demoted from the WSL in 2013 due to a failed reapplication based on strict financial criteria. Taking their place was Manchester City, a decision described by Arsenal boss Vic Akers as ‘morally scandalous’. 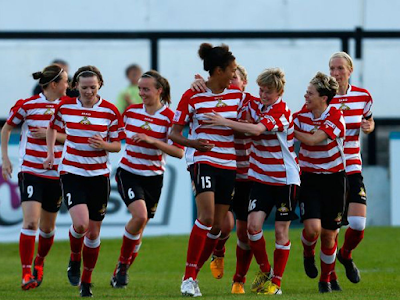 The decision meant the Belles would compete in the rebranded WSL 2 (now the WSL Championship). To add further salt into the wounds, Manchester City had actually only finished fourth in the same division the previous season which prompted even more consternation.
The renamed Belles took disappointment in their stride however and lost just one game during the maiden WSL 2 campaign but missed out on promotion to Sunderland. Another second place finish was achieved in 2015 but due to the expansion of the WSL to nine teams, the Belles returned to the top flight.
However, their spell was brief and disappointing as they lost 15 of 16 matches and were relegated. Salvation to arrive in a second-placed finish in the 2016 Spring Series, a tournament played in the summer between the 2016 and 2017-18 seasons.
In 2017, the Belles produced their finest season for many years as they claimed the WSL 2 title, their first trophy since 1994 as they finished 10 points ahead of Brighton. The league was to undergo a restructuring meaning promotion was removed and instead Doncaster had to apply for a license to compete in the top tier. 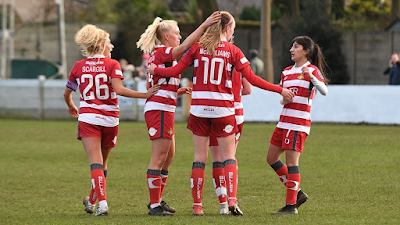 This was achieved but the club then withdrew their application for financial reasons and were relegated to the FA Women’s National League. This was all a far cry for the growth of the game which recently signed a three-year TV deal worth £7m-£8m each season with 22 matches shown on the BBC and up to 44 on Sky with the remaining games to be shown on the FA Player.
The matches will be shown from next season with 75% of investment revenue going to WSL clubs and 25% to the Women’s Championship. Such a move will undoubtedly increase the profile of the game in this country and will help the clubs attract more world-class players from abroad to add to Chelsea’s Sam Kerr and Manchester City’s Sam Mewis and Rose Lavelle. This income will surely be a massive benefit to Doncaster but they have a long way to go if they are to match the success of the forgotten Belles.
This piece was kindly written for @TFHBs by Sam Harris - you can follow Sam on Twitter @Sam_Harris96
©The Football History Boys, 2021