The 1978 World Cup: Blood on the Crossbar | @RhysWRichards 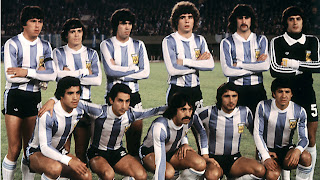 The opportunity provided by the world’s microscope was not lost on the opposition either. While the government maintained a wall of silence domestically, Argentinean exiles in Europe were gaining traction in raising awareness of the junta’s atrocities. Osvaldo Bayer fled to Germany and was successful in assisting the publication of the first surveys on human rights violations in Argentina. Internationally, the cat was out of the bag.
COBA (The Committee for the Boycott of the World Cup in Argentina), a Paris based organization supported by Amnesty International, had chapters all across France. So worried were the Argentine junta, that they set up a counter propaganda office in Paris to combat COBA in order to infiltrate and intimidate their members.
Former Argentine finance minister, Juan Aleman, bemoans the sophisticated PR skills of Argentinean exiles in garnering sympathy for dissenters of the regime - ‘The Guerillas got a lot of support from Europe. The generals were not used to dealing with their public relations’.
As we know, the campaign to boycott the World Cup was unsuccessful. FIFA were characteristically ambivalent towards removing the tournament from its hosts. In fact, FIFA were keen to distance the competitors from the political situation in Argentina. Players were banned from going to places of political activity such as Plaza Mayor, and players were banned from speaking to Las Madres de Plaza Mayor.
This justified the unease of some of the football associations whose teams travelled to Argentina. The cold war backdrop made for an uncomfortable climate for some of the teams taking part. West Germany in particular were recovering from the ‘German autumn’ of 1977, where far-left militant organization The Red Army Faction engaged in a campaign of kidnappings, murder and bombings.
Unquestionably, the team that faced the most pressure to boycott was The Netherlands. The Dutch campaign to boycott the world cup was spearheaded by Freek De Jonge and Bram Vermeulen, two stand-up comedians who toured the country with a Cabaret show titled ‘Blood on the Crossbar’. De Jonge and Vermeulen, with the support of Amnesty International sought to ‘stir the pot’ of those unlikely bedfellows - sport and politics.
Initially, their objective was for The Netherlands to boycott the world cup. But in truth, this was highly unlikely and not a genuine solution to the crimes taking place in Argentina. Their ultimate goal was by ‘stirring the pot’ to put the Argentinean government under international spotlight. Vermeulen saw the world cup as the ‘perfect catalyst to explain the situation there’. Although sympathetic to their cause, the Dutch government were reluctant to sanction a boycott or to supersede the Dutch FA, who despite representing the country, they considered an independent organization. The Dutch FA were hostile towards the boycott campaign, Vermeulen accusing them of being ‘afraid we would snatch their favourite toy’.
Perhaps unsurprisingly The Netherlands fancied themselves as tournament favourites. And even without the talismanic Johan Cruyff, their confidence was justified as they would take to a ticker tape scattered field to face Argentina in the final.
The Netherlands was famously within the width of a post from winning the world cup. We can only speculate what this would have meant for the dictatorship in Argentina, although it is alleged that they would have refused to receive the trophy from Videla.
However, the moral dilemma of shaking hands with the dictator never came to pass. Two goals from Mario Kempes and one from Daniel Bertoni ensured that the cup would remain in Argentina. The sight of Kempes, hips swerving, hair flowing and sending the Dutch defence in the wrong direction, before going back to collect the ball and score, is one of the world cup’s true iconic moments. Countless posters and paintings exist of the iconic Estadio Monumental turf, littered with ticket tape. But perhaps what is less well-remembered is the black tape at the base of the goalposts. This was said to be placed there in tribute to the disappeared people of Argentina. Like discovering a hidden meaning in a piece of art, once you know it’s there, you cannot unsee it. A symbolic reminder that as politics is embedded into sport, in the same way the tape is stuck to the goalposts.
Written by Rhys Richards, for The Football History Boys (@TFHBs), Rhys is currently researching the events surrounding the 1978 World Cup, for his debut non-fiction book, ‘Blood on the Crossbar’. He is looking to speak to anyone involved in the boycott, people involved in or with knowledge of COBA, and families of those who lived under the military junta. Find Rhys on Twitter: @RhysWRichards.
©The Football History Boys, 2021
(All pictures are borrowed kindly and not owned by TFHB)