The 1999 World Cup: A Breakthrough in the Women's Game

By The Football History Boys - April 22, 2019
In our recent series, The Most Important Moments in Women's Football History, there was one moment which, to us, seemed to epitomize the growth of the game like no other - the 1999 World Cup. Hosted by the 1991 World Champions, the USA - the tournament has since been heralded as a milestone for the women's game. In this piece, we are going to explore why the competition was such a success, who were the major players and what did people make of it around the world?

Following the success of the Olympic Games in Atlanta and the previous editions of the Women's World Cups - the natural hosts in 1999 were of course, the United States. By the end of the millennium, soccer fever stemming from the reception of the men's tournament in 1994 and women's success at the 1996 Olympics, had well and truly gripped the US. The greater number of fans and indeed, prospective spectators, would lead to larger stadia and significant effort being put into the tournament. Originally, the 1999 World Cup had been planned to be played on a far smaller scale in keeping with social attitudes to women's football, when the US was chosen to host in 1996. New precedents were set in terms of media coverage, attendance and television rights.

So who would be competing in the final World Cup of the twentieth-century? Alongside the hosts was an array of international talent. A technically-gifted Asian contingent featuring 1991 hosts, China and an emerging Japan would be a match for anyone. Likewise, holders Norway were part of a 6-nation strong European selection. Women's World Cup regulars Nigeria were joined by debutantes, Ghana before Australia, Canada and fellow North Americans, Mexico completed the 16 teams in contention.


Expectations for the tournament were high. In terms of promotion, the already superstar status of forward Mia Hamm had helped to grow the profile of the women's game in the US. Home support expected their side to repeat their 1991 heroics, and no one wanted to miss it. Almost 79,000 people crammed into the Giants Stadium, New York to witness the tournament's opening game between Denmark and the hosts. Such crowds to witness women's football or even women's sport was extremely rare. Even the 1995 final in Sweden only attracted 17,000 fans and group games seldom reached much more than a thousand.

It was clear that this tournament was something new. It was an opportunity to highlight just how far the women's game had come in such a short space of time. The US won their opening match 3-0 with goals from Hamm, Foudy and Kristine Lilly. Goals would be easy to find throughout the tournament as an average 3.84 were scored per game. This number has never been improved on by any Women's World Cup or any men's World Cup from 1958 onwards. A festival of football would only help to draw and maintain large crowds across the United States.


The rest of the group stage saw the big hitters out in force. The USA, Brazil, China and Norway topped their respective groups and shared a staggering 50 goals between them. This truly was a World Cup like no other. Household names were further being etched into the memories of a new breed of football fan - the talents of Prinz, Sissi and Sun Wen would help to inspire the next generation of players across the world. A remarkable knockout-stage would await the final eight nations.

Strangely the quarter-finals took place over two days and were played in two venues, San Jose and Landover. Perhaps as a means of keeping attendance figures consistently high, first China and Norway eased through the respective challenge of Russia and Sweden, before the 55,000 inside the Washington Redskins' Jack Cooke Kent stadium witnessed two of the greatest World Cup matches in history. A raucous home-support roared on the US to a thrilling 3-2 victory over Germany. Despite finding themselves 2-1 down at half-time, goals from Brandi Chastain and Joy Fawcett meant a semi-final would await.

The final quarter-final saw Brazil come face-to-face with Nigeria. Brazil, whose men's side had won the 1994 World Cup in the US, had entertained those watching throughout the tournament. Their blend of samba skills and ruthless attacking football meant little could stop the Selecao. Despite racing to a 3-0 first-half lead, the 'Yellow Canaries' were eventually pegged back to 3-3 with just 5 minutes to play. Momentum was with the Nigerian 'Super Falcons', but a golden goal from Sissi sent the Brazilians into the final four.

The semi-finals was where the Brazilian challenge ended. Perhaps feeling the effects of their titanic struggle with Nigeria, they were comfortably dispatched by the US in Stanford. Meeting the US at the Pasadena Rose Bowl would be China. China had grown throughout the tournament and thumped the holders Norway in the semi-finals 5-0. Thanks to the efforts of top scorer, Sun Wen - the Chinese were aiming to go one better than their silver-medal at the 1996 Olympics and win the title for its ever-growing population. 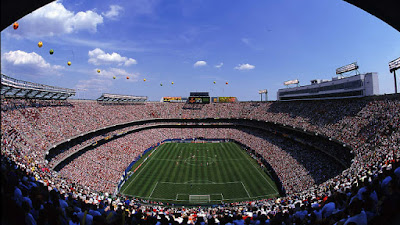 Before the game, expectations were high. The United States expected the victory, but the Chinese would be a world-class opponent. The 1996 gold-medal match had been edged by the US 2-1 in front of 76,000 in Georgia, but this game was different. Over 90,000 fans were crammed into the Pasadena Rose Bowl to witness the final. Despite a tournament laden with goals (123 in total), the final would end goalless. The 90,000 fans, including President Clinton, had witnessed an encounter balanced on a knife-edge. Extra-time would see the sides cancel each other out leading to a dramatic penalty shoot-out.

Following a Briana Scurry save from Liu Ying, the chance had arrived for defender Brandi Chastain to send 90,000 screaming fans into utter pandemonium. Thumping the ball into the top left hand corner, an euphoric Chastain would remove her shirt and create one of the defining images of the decade. Numerous articles have been dedicated to this moment alone as the image of the US left-back on her knees became splashed on every newspaper and magazine in the States. The tournament in 1999 had set the standard and created a platform for the women's game around the world.

So why start our journey through the Women's World Cup in 1999? It's simple. The 1999 World Cup was not just a milestone for women's football, but for women's sport in general. The tournament had showcased a growing game and helped highlight the emergence of female sport to a global audience which had never been bigger. It was not just in the US that the game would grow due to '99, but all around the world. The superstar status of forwards Mia Hamm and Kristine Lilly meant the game now had stars to rival the men's game and overnight they had become vocal points for women's sport and women's rights across the globe.

Even in China, despite being defeated finalists, the players returned as heroes. It would help to provide impetus to the Beijing 2008 Olympic bid and even inspire the men's team to World Cup qualification in 2002. Golden Ball winner Sun Wen recalls that the tournament, "pushed women's football to a higher level" and that losing the final "was not important anymore". In a Guardian article from 2003, it recalls the success of the 1999 Women's World Cup and urges the importance of learning from how the stars were treated so favourably by the American public, for, above all else, their undoubted passion, togetherness and skill.


By Ben Jones - The Football History Boys (@TFHBs or @Benny_J)